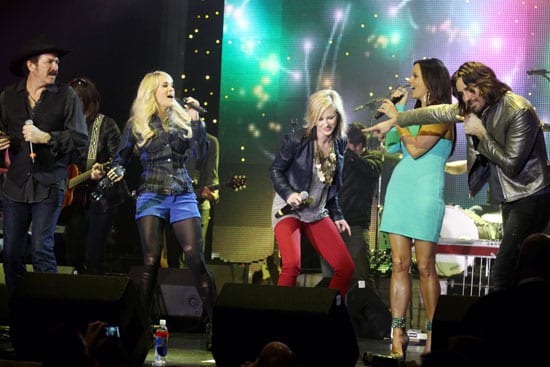 Jake Owen kicked off the evening, performing his current single “Alone With You,” and adding the PG-13 concert ending “I can’t be your booty call.” He also delivered a thundering version of his No. 1 hit “Barefoot Blue Jean Night.”

New faces performing included Tyler Farr (on “Hot Mess” and “Hello Goodbye”), a soulful Kristen Kelly (on “You Love To Make Me Cry” and “Ex-Old Man”), and Casey James (on “Let’s Don’t Call It A Night” and “Crying On a Suitcase”). Love and Theft, now a duo, came out to play “Angel Eyes” and their previous hit “Runaway,” with guitarist Josh Leo tossing in some sweet Knopfler-esque guitar solos for the extended jam. Josh Thompson stepped up for “I’m Comin’ Around,” and “Way Out Here.” Kix Brooks had his coming out as a solo artist with “Let’s Do This Thing,” and his debut single “New To This Town.”

A satellite acoustic stage (right in front of our table!) was reserved for acoustic performances from Pickler and Evans. Pickler played “Stop Cheating On Me” and “100 Proof” from her new album 100 Proof, and Evans played her classic “Suds In The Bucket” as well as “Anywhere.”

Pickler was a delight as host, expertly cracking wise with Warren and Evans. While waiting for headliner Carrie Underwood’s band to set up, she told a bawdy story about an ex who was obsessed with Sara Evans, prompting her to dye her hair much darker with disastrous results. Underwood joked, “I think we all learned why they asked me and not Kellie Pickler to host the CMA Awards.”

Underwood played her hit “Undo It,” as well as “Someday When I Stop Loving You,” before debuting her new single “Good Girl” which was emailed to programmers while we sat on the boat. The festivities wrapped up with an ensemble rendition of Young Rascals song “Good Lovin’” that featured Underwood, Evans, Kelly, Owen, and Brooks.