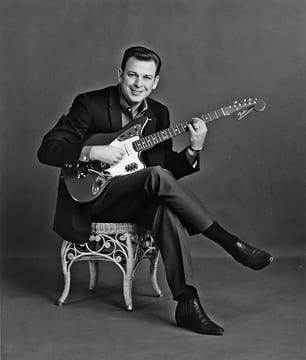 Billy Strange, a member of the Musicians Hall of Fame in Nashville, has died at age 81.

Equally notable as a top studio guitarist, record producer, songwriter and music arranger, Strange was born in 1930 and raised in Long Beach, CA. He was performing with his parents by age fourteen. He initially worked as a country guitarist, backing Spade Cooley, Roy Rogers, The Sons of the Pioneers, Speedy West and Jimmy Bryant in the 1950s. He also served a stint in Count Basie’s band.

He rose to become a top session guitarist in L.A., a member of the ensemble known as “The Wrecking Crew.” As such, he backed everyone from The Beach Boys to Frank Sinatra and Elvis Presley. Records by The Everly Brothers, Nat King Cole, Randy Newman, Willie Nelson, Dean Martin, Rick Nelson, Jan & Dean, Love, Johnny Cash, The Hondells, Doris Day, Wanda Jackson, Wayne Newton, The Ventures, Pat Boone and many more contain his guitar stylings.

Strange’s distinctive, inventive arrangements include Nancy Sinatra’s “These Boots Are Made for Walking,” Cher’s “Bang Bang (My Baby Shot Me Down)” and the Nancy and Frank Sinatra duet “Somethin’ Stupid.”

Recording for GNP Crescendo, Billy Strange issued a dozen instrumental albums in the 1960s. He was also a member of the pop band The Avalanches.

As a songwriter, Strange co-wrote “A Little Less Conversation,” “Charro,” “Clean Up Your Own Back Yard” and “Memories” for Elvis Presley, “Limbo Rock” for Chubby Checker and a number of instrumentals for Speedy West, Jimmy Bryant and Herb Alpert.

Billy Strange was induced into the Musicians Hall of Fame in 2007. He is also a member of the Rockabilly Hall of Fame. He died in Nashville on Wednesday, February 22. He is survived by his wife, singer Jeanne Black, as well as two children. Funeral arrangements have not been announced.