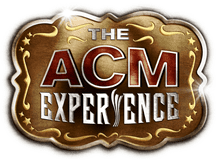 The Experience includes the ACM BBQ Throwdown competition for competitive barbecue circuit champions, vendors, and interactive booths; the ACM Expo includes 200K square feet of shopping, gaming and eating with ‘town square’ performances from yet to be announced artists; and the Ram Ride and Drive will demonstrate the capabilities of the truck outside the resort.

All these events will culminate around the previously-announced ACM Fan Jam, a ticketed event hosted by Zac Brown Band at the Mandalay Bay Events Center during the ACM Awards show at the MGM Grand across the street. This live concert event will continue after the Awards telecasts on CBS and is to feature special appearances and giveaways.

“The ACM Experience is a natural extension of the Academy’s focus on bringing fans the best events to promote the genre and provide additional exposure for both established and new artists,” said Bob Romeo, CEO of the ACM.

Additionally, the ACM has announced its monthly My Cause February web feature as “Country Sings for Cancer,” supporting Sarah Darling’s Women and Cancer fund. For more information, click here.