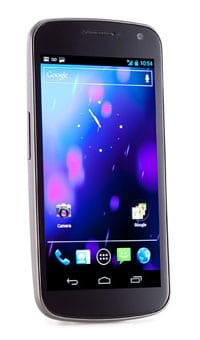 There’s a new 4G phone about to debut and it runs on something that sounds like dessert for Thanksgiving dinner, Ice Cream Sandwich (ICS). That’s the name of the latest–and greatest–new Android operating system, 4.0 that is included as part of the new Samsung Galaxy Nexus.

The new phone packs a beefy 4.65 inch display while keeping very compact dimensions at the same time. The screen size is one of the largest yet, especially when compared with the 3.5” iPhone 4s display. According to reviewers, the new Android system has greatly improved and simplified many of the everyday tasks making the phone more friendly overall.

This phone was released a few days ago in the U.K and is scheduled to be released in the U.S. via Verizon before year end. Rumors say that Verizon will rename the phone Nexus Prime. One of the more talked about features on this unit is its facial recognition software to unlock it.

Unfortunately, the Wall Street Journal’s Katherine Boehret said, “I found the facial-recognition feature to be unreliable. To set this up, I held the Galaxy Nexus up as if I was about to take a photo of myself with the front-facing camera, and a traced image of my face appeared on the screen. I also set up a back-up unlocking option: tracing a pattern on the screen. Whenever I wanted to use the phone, I held it up to my face and if facial recognition worked, it unlocked. But this only worked half the time, sometimes because of low lighting, whether outside at night, in restaurants or even in my own kitchen. Other times it just didn’t recognize me.”

Overall however, Boehret noted, “If you’ve been curious about Android, the release of Ice Cream Sandwich will mark a good time to jump in.”