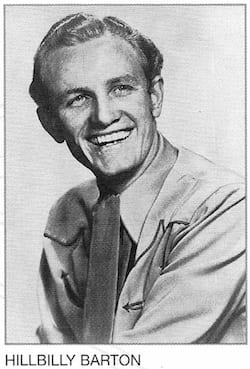 Barton is best known for “A Dear John Letter.” As recorded by Ferlin Husky and Jean Shepard, the song was a huge No. 1 hit in 1953. It launched both artists’ hit-making careers. The songwriter also wrote its follow-up, 1953’s “Forgive Me John.” In 1954, Billy Barton wrote the Jim Reeves and Ginny Wright duet “I Love You.” It rose to No. 3 on the national country hit parade. Webb Pierce scored a top-10 hit with the songwriter’s “You’ll Come Back” in 1958.

Bobby Bare and Skeeter Davis successfully revived “A Dear John Letter” in 1965. Barton’s songs were also recorded by Red Sovine, Pat Boone, Loretta Lynn, Ernest Tubb, Rose Maddox and others. During his lifetime, he registered more than 200 songs with BMI.

Billy Barton was also a performer and a recording artist. He was on The Louisiana Hayride and was Johnny Horton’s duet partner on Abbott Records in the 1950s. He also recorded for King, Gulf Reef, Sims, Fire, Vidor and other small labels. Several of his singles are considered collectible by rockabilly fans. He was sometimes billed on disc as “Hillbilly” Barton or “Billy Boy” Barton.

His real name was John Grimes. He died on October 8 at his home in Nashville. He is survived by three daughters, a son and six grandchildren and has been interred at Woodlawn Memorial Park in Nashville.