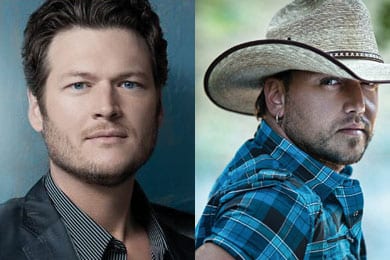 Blake Shelton and Jason Aldean both earned their first CMA Award nominations for Entertainer of the Year.

Nominations for the 45th Annual CMA Awards are here, and there are a few discussion-worthy items, including new entries in Entertainer of the Year, the lengthening time of artist development, and the omission of Miranda Lambert from two expected categories.

First let’s examine the Entertainer of the Year Category.

It’s obviously a big year for Jason Aldean, who scored five total nominations. The Entertainer of the Year nod (his first) might seem surprising, but Aldean has been on this trajectory for some time. His Album of the Year-nominated My Kinda Party was the No. 1 selling country album for the first half of 2011 and No. 4 in all genres, and the My Kinda Party tour has sold out major markets nationwide. Yet his only nominations to date have been the Horizon Award in 2007 and 2008. Today’s results, particularly the Entertainer of the Year acknowledgment, affirm his status as one of country music’s brightest new stars.

Also getting his first Entertainer of the Year nomination is reigning Male Vocalist of the Year Blake Shelton, who also earned five nominations. While Shelton’s sales and touring statistics may not match all the other Entertainer contenders, his judging role on NBC’s The Voice has made him a highly visible personality and might signal that CMA voters are starting to place more weight on media celebrity in addition to the usual criteria.

But Aldean, Shelton, Taylor Swift, and Keith Urban will all face some heavy-duty competition from reigning Entertainer of the Year Brad Paisley. Also with five nominations this year, Paisley maintains his status as the third most nominated artist in CMA Awards history. He’s been nominated every year since 2000, making 57 total. Only George Strait and Alan Jackson have more.

Curiously absent from the Entertainer category is Kenny Chesney, whose recent spate of hits (“Somewhere With You,” “Live A Little,” “You and Tequila”) and gigantic Goin’ Coastal stadium tour are compelling arguments in his favor.

The New Artist of the Year category (formerly the Horizon Award) also presents an interesting discussion on artist development.

Nominees Luke Bryan and Chris Young previously received New Artist nominations in 2010 but they, along with 2011 nominee Eric Church, are all currently supporting their third albums. While they technically don’t meet the definition of a “new” artist, all three are beginning to experience widespread commercial success for the first time. Does this indicate  the development period for new artists is increasing?

Filling out the New Artist category are Thompson Square, whose breakout success with “Are You Gonna Kiss Me Or Not” makes their inclusion a no-brainer, and The Band Perry, who were strangely omitted from the ballot in 2010. The New Artist criteria states that an artist can only be included in the category twice, so win or lose this will the last year for Bryan and Young.

She had major CMA wins in 2010, including Album of the Year (Revolution) and Female Vocalist, and a nomination for Entertainer of the Year. This year she’s only up for two awards: Musical Event for “Coal Miner’s Daughter” and Female Vocalist of the Year. All well deserved, but her success has only continued upward in 2011. She had yet another No. 1 with “Heart Like Mine,” which could have been a Single of the Year hopeful, and mounted her first headlining tour. Additionally, the Video of the Year category seems incomplete without the clever clip for “Only Prettier” which placed Lambert, Kellie Pickler, Hillary Scott and Laura Bell Bundy in dual good girl/bad girl roles. Then again, Revolution was over a year old at the 2010 awards and “Heart Like Mine” was its 5th single, which may explain her reduced visibility.

The show goes on November 9, live from the Bridgestone Arena in downtown Nashville.  No doubt, we’re in for a night full of surprises… 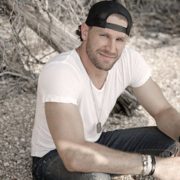 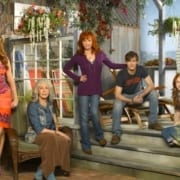