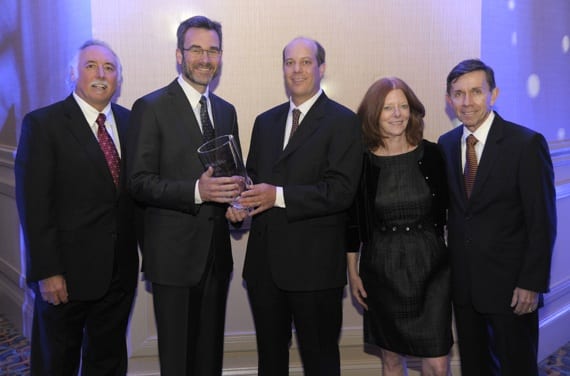 Chapter 364
Officially, it was Leadership Music honoring the CMA on Tuesday evening (5/17), but Mayor Karl Dean pointed out that the entire city of Nashville salutes this organization.
He pointed out that the CMA Awards puts a national TV spotlight on the community and that the CMA Music Festival brings tens of thousands of tourists to town. Furthermore, the 2010 festival donated $2.9 million to Metro Schools and flood relief.
“Thank you to the entire music community for helping our city recover. On behalf of all the people of Nashville, thank-you to the CMA for making us Music City and for helping to make Nashville one of the greatest cities to live in, in the world.”
Hosted by Martina McBride, the occasion was the Leadership Music Dale Franklin Award gala at the Renaissance Hotel Ballroom. “We are paying tribute to the CMA, its history and its legacy,” said Martina. She brought to the stage a bevy of spectacular vocalists.
First up was the CMA’s first Female Vocalist of the Year (1967), Loretta Lynn. She entered to a standing ovation, resplendent in a sparkling lavender gown and immediately tore into “Coal Miner’s Daughter.” Loretta is recovering from knee surgery, but the 76-year-old’s voice remains a thing of awesome clarity and power.
“None of us female vocalists would be here today without the great Loretta Lynn,” said Martina, who was clad in a trim charcoal suit.
She next brought on Ronnie Milsap.
The charge for the evening’s remaining performers was to sing one of their own hits, plus the music of someone who influenced them.
Ronnie got up to speed on “A Legend in My Time,” hitting its climactic high note on the money. “That was 1974, I certainly remember it well,” said the 68-year-old pianist-singer. “At the end of that year, the CMA gave me the Male Vocalist of the Year. That’ll boost your career.” He next delivered the late Mickey Newbury’s “The Future’s Not What it Used to Be,” a great song which has appeared on at least two of Ronnie’s albums, but has never been a single.
Ronnie chose the late Ray Charles as his influence, recalling meeting his fellow blind pianist backstage in Atlanta. The country superstar was being pressured to go to law school at the time, but yearned to make music. After listening to him, Ray told him to “follow your heart,” which was all the encouragement Ronnie needed. He offered a “Stormy Monday” blues medley, “Your Cheating Heart” and “What’d I Say,” drawing a standing ovation.
“As people, they are as beautiful as their voices,” said Martina of Little Big Town. The foursome tore the house up, opening with “Little White Church.”
“As songwriters, we are always trying to write something as good as Kris Kristofferson,” said the group’s Kimberly Schlapman. “And we’re still trying.” The group’s blazing four-part harmony was breathtaking on Kris’s “Why Me.” The singer-songwriter was elected to the Country Music Hall of Fame by the CMA in 2004.
Metro Public Schools Director Dr. Jesse Register took the stage. He congratulated the school-benefit CMA Music Festival on its 40th anniversary and introduced The Swing Thing, the Nashville School of the Arts five-piece band. The kids performed “Walk Right Back,” a song originally popularized by 2001 Hall of Fame inductees The Everly Brothers.
Martina introduced Keith Urban, who began on acoustic guitar, seated, to salute 1968 CMA Male Vocalist and Entertainer, plus 2005 Hall of Fame inductee Glen Campbell with “Wichita Lineman.” Switching to electric guitar, Keith joyously rocked “Somebody Like You.”
“All I really want to be is Keith Urban’s backup singer,” said Martina. “I sing along with you in the car.” She next introduced reigning CMA Entertainer of the Year Brad Paisley.
“I am so proud to be one of those people who represent the CMA,” he said. “It’s the honor of a lifetime.”
Brad chose to salute the late Buck Owens, who was a Hall of Fame inductee in 1996. After a spirited “Tiger By the Tail,” Brad did his own hit “This Is Country Music” acoustically. Like all the others, he drew a standing ovation.
LM’s exec Karen Oertley and board chairman Jamie Cheek did the award presentation. Karen said, “Dale Franklin personified the term ‘leader,’” and pointed out that now there are more than 850 LM alumni, including a class that graduated last Saturday.
“It is with tremendous pride that we salute one of the most dynamic music organizations of all time,” said Jamie. “The CMA has taken leadership to a new level.” CMA board chairman Steve Buchanan accepted, saying, “It’s really extraordinary to receive anything with Dale Franklin’s name on it.” He couldn’t resist a shout-out to his own LM class of 1994, which drew whoops from Steve’s classmate Bob DiPiero.
Martina reappeared to sing “Til I Can Make it on My Own” in honor of 1968-70 CMA Female Vocalist and 1998 Hall of Famer Tammy Wynette. “As an artist, we hope for songs like this, that we get to sing for the rest of our lives,” said Martina introducing the thrilling and still moving, CMA award-winning “Independence Day.” Brad and Little Big Town joined her in the evening’s finale, “Will the Circle Be Unbroken.”
In between performances, video montages traced the history of the CMA’s awards show and Fan Fair. Martina also recognized guests in the audience such as Hall of Fame members Jo Walker Meador and Frances Preston, Walker’s fellow former CMA execs Ed Benson and Tammy Genovese and the event’s honorary co-chairs June & Bill Denny and Phran & Joe Galante. 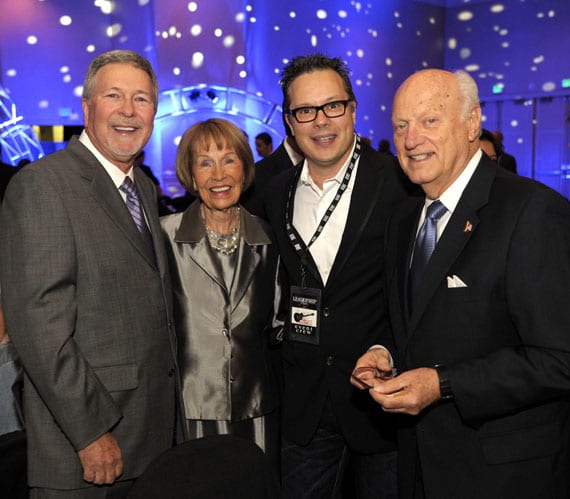