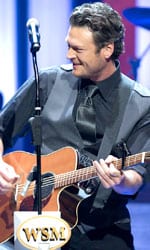 It was quite a weekend.

On Saturday (10/24), Blake Shelton was inducted into the cast of the Grand Ole Opry. “It’s shocking,” he said backstage. “Because you walk up and down these halls and look at [photos of] who’s been here before.”

I guess so, since both the Ryman and the Opry House’s backstage areas are festooned with images of Hank Williams, Johnny Cash, Minnie Pearl, Porter Wagoner, Patsy Cline, Roy Acuff and the like. Those are some pretty big shoes to be walking in.

Blake was presented with the Opry-member trophy by Trace Adkins. The pair, of course, did a romping rendition of “Hillbilly Bone” for the delighted, sold-out Opry audience.

“Blake has developed a strong connection to the Opry and its members since he made his Opry debut in 2001,” observed the show’s VP & GM Pete Fisher. “We’re very happy to formally welcome Blake into our family.” Sunday night (10/25) was this year’s second Country Music Hall of Fame Medallion Ceremony. We staged the first one for Ferlin Husky and Billy Sherrill last May. At that time, the Hall’s Ford Theater was still flood damaged. Now we were back in it. But it was a little weird, because in the meantime, inductee Jimmy Dean had died (on June 13). And the day before the ceremony, inductee Don Williams came down with bronchitis. So this was the first of these events where no honoree was present.

Keith Bilbrey announced the red-carpet arrivals. He was subbing for Bill Cody, whose mother has passed away.

Once settled into the Ford Theater, we listened to an audio clip from the Hall’s archives. It was The Stanley Brothers cover of Hank Ballard & The Midnighters’ “Finger Poppin’ Time.” What a treat.

Country Music Hall of Fame Director Kyle Young said, “It’s always a pleasure to welcome you here to country music’s most prestigious night.” Board president Steve Turner added, “We always love and appreciate your fellowship. We hold Jimmy Dean and Don Williams in the highest esteem.”

As is customary, the ceremony officially began with a gospel performance. Marty Stuart & His Fabulous Superlatives did the honors with “Working on a Building.”

“Tonight is bittersweet,” noted the CMA’s Steve Moore. “We are saddened by the death of Jimmy Dean and the sudden illness of Don Williams. We keep these legendary performers in our thoughts and prayers.” The CMA underwrites the gala.

“Let’s talk about Jimmy Dean,” said Kyle, “a Texas tall drink of water. He is considered to have been smarter than a tree full of owls.”

While stationed in Washington D.C. during a 1946-49 stint in the Army Air Corps, Jimmy formed his Texas Wildcats band. The group landed a regular radio job on the city’s “Town & Country Time” show in 1952. Jimmy Dean had his first hit, “Bumming Around,” in 1953.

“I met Jimmy Dean in 1949,” recalled Roy Clark. “He was no accident. He knew where he was going.” Backed by Charlie McCoy and the band, Roy did Jimmy’s 1962 hit “Little Black Book.” They were rewarded with a standing ovation.

“Two Hall of Fame icons on the same stage,” exclaimed Kyle, “this is Nashville.”

Next up were Dailey & Vincent with their harmony-soaked arrangement of Jimmy’s 1965 tune “Harvest of Sunshine.”

But for Jimmy Dean, hit records don’t really tell the story. “He took country music to network television,” explained Kyle. ABC’s “The Jimmy Dean Show” (1963-66) made him, “one of the first country stars with his own, prime-time, network TV show,” said Kyle. It showcased all the great country stars of the day and was an important springboard for Roger Miller, Buck Owens, Connie Smith and others. It also featured a puppet dog named Rowlf, which introduced the world to the talents of Jim Henson, who later created The Muppets.

The ceremony’s next standing ovation was given to Trace Adkins and The Jordanaires for their terrific recreation of 1961’s “Big Bad John.” Jordanaire Gordon Stoker passed out and fell at home a couple of weeks ago and is hospitalized recovering from pneumonia. So the group consisted of Ray Walker, Curtis Young, Louis Nunley and Michael Black. “Big Bad Trace!” said Kyle in appreciation. He talked of Jimmy Dean’s acting career as a regular on the Daniel Boone TV show and in the 1971 James Bond movie Diamonds Are Forever. In 1969 he created the Jimmy Dean Sausage company. He published Thirty Years of Sausage, Fifty Years of Ham as his autobiography in 2004.

Bill Anderson did the induction honors with a beautifully written and deeply personal speech. He recalled that Roger gave Jimmy a gold plated doorknob in gratitude with the inscription, “Thank you for opening doors for me.” Added Bill, “If you make your living in country music, Jimmy Dean opened doors for you, too. He stood up, and he fought for all of us.”

Bill recalled talking on the phone with Jimmy just after the latter had learned of this honor. “I never thought I’d make it,” said Jimmy to Bill. “I figured I’d pissed off too many people down there [in Nashville].”

“I wish everybody in this room could have known the Jimmy Dean I knew,” Bill said. “In the song, Jimmy says, ‘Big John was a big, big man.’ He didn’t have a thing on Jimmy Dean.”

Daughter Connie Dean Taylor accepted the Medallion. She was the subject of the star’s 1962 hit “To a Sleeping Beauty.” Connie kissed the Medallion and held it skyward. “He loved country music, and he loved to entertain,” said Connie to the crowd. “But I believe what he loved the most about his profession was the many friends he made. He would say so often, what a lucky and fortunate man he was.” Widow Donna Meade Dean embraced both Connie and Bill as they left the stage.

The ceremony continued with Kyle recounting the early years of Don Williams. They included a stint in the Nashville-recorded folk trio The Pozo Seco Singers. When that group ended, Don returned to his native Texas. But he came back to Nashville to give music one more try. Initially, he went to work as a publishing administrator for Jack Clement. His demo recordings of the company’s songs led to having his first radio hits in 1972-73.

Joey + Rory performed 1973’s “Amanda.” “When I was in the ninth grade, I bought a Don Williams songbook because I wanted to learn to play guitar,” reported Rory Feek. “Don Williams changed my life.”

“I’m so crazy about Don Williams,” said Alison Krauss. “I think he sounds somewhere between Santa and The Almighty.” Her gorgeous vocal on “I’m Just a Country Boy” drew another s.o.

Kyle noted that between 1974 and 1985, Don had 16 No. 1 hits. Don is also that rarity, a wildly popular international country star. He has huge followings in Germany, Ireland, the U.K., South Africa, Australia and Nigeria. The Del McCory Band received yet another s.o. for “Lord, I Hope This Day Is Good.” Chris Young saluted “The Gentle Giant” with “I Believe in You.” Don’s sons Tim Williams and Gary Williams were applauded by the audience. Jim Foglesong did the Hall of Fame induction honors. “This is the biggest of the big,” Jim stated. Don’s manager Robert Pratt accepted.