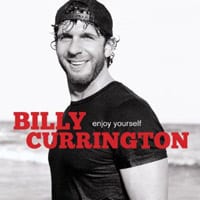 The fourth record from Mercury Nashville artist Billy Currington is set for release September 21. The album is entitled Enjoy Yourself and includes the Currington’s Top 5 smash, “Pretty Good At Drinkin’ Beer,” written by Troy Jones. Enjoy Yourself, featuring the Georgia native’s trademark mix of country, R&B and beach music, is produced by Currington and Carson Chamberlain.

“It’s a great mix,” Currington says about the collection of 10 songs. “It reflects who I am. I’m definitely not just one thing. I’m the beach guy, I’m the country guy, I love my dirt roads and fishin’, but I love New York City and L.A. and Miami, too.”

Billboard claims first single “Pretty Good At Drinkin’ Beer” “is the kind of ditty worth spinning on loop. Currington is pretty good at more than just knocking back a few cold ones and this lead single sounds like a sure thing.”

“This record was about recording songwriter’s songs,” says Billy. “I could have gone back and recorded a bunch of mine that I’ve written, but there were a lot of writers I wanted to record, like Shawn and Troy. I had to put their songs on this album.”