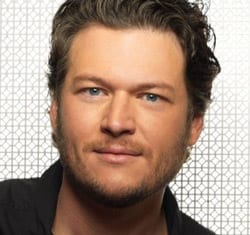 Warner Bros. Records artist Blake Shelton has plenty of reason to celebrate these days as his new SIX PAK album, All About Tonight, debuts at No. 1 on Billboard’s Top Country Albums chart and No. 6 on Billboard’s Top 200 chart, making it his highest charting record to date. The title song from the collection also hit the No. 1 spot this week. This marks Shelton’s second No. 1 of the year and seventh of his career.

Shelton is the only solo male country artist – one of three artists overall (Carrie Underwood and Zac Brown Band) – to log more than one chart-topper so far this year on Billboard’s Hot Country Songs with his singles “Hillbilly Bone” and “All About Tonight.” His recent chart successes make this year the pinnacle of Shelton’s career.

“I’ve been telling people in interviews that if someone had never heard my music before and asked me what album they should buy of mine, I would recommend this one because it truly is the best work I have done,” Shelton says. “It’s a validation for me to know that fans feel the same way about this album, and nice to know that you’ve done something right.”

Shelton’s latest SIX PAK boasts six new tracks, all produced by Scott Hendricks. His first SIX PAK album, Hillbilly Bone, was released earlier this year and debuted at No. 3 on Billboard’s Top 200 chart and No. 2 on the Top Country Albums Chart. It also featured the No. 1 title track with longtime friend Trace Adkins. Shelton hits include his back-to-back multi-week No. 1 singles, “She Wouldn’t Be Gone” and “Home,” his six-week No. 1 debut single, “Austin,” and two additional multi-week No. 1 singles with “The Baby” and “Some Beach.”