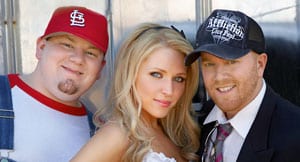 Fans that loved their signature song, “Rockin’ the Beer Gut,” won’t be disappointed, as that song as well as “Last Man Standing” and “Off the Hillbilly Hook,” and six new tracks make up Tailgate. Produced by Toby Keith and Mark Wright, the CD continues with the feel good type of music Trailer Choir has come to be known for and what band member Butter calls “cold beer country.”

Over the course of the next few weeks, the band will be profiled in Country Weekly and the new People Country special. Trailer Choir will be GAC’s Artist of the Month for July. They will also be featured on GAC’s On The Streets and CMT Insider and Top 20.

For additional information on the band, as well as concert dates, visit www.trailerchoir.com.