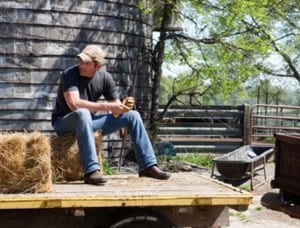 Atkins’ tune about a hot summer romance that turns to true love has become the fastest climbing single in the singer’s career, selling more than 140,000 downloads on iTunes in only a few weeks. His previous No. 1 hits, “If You’re Going Through Hell,” “These Are My People,” and “Cleaning This Gun,” are approaching three-quarters of a million single downloads and with the rapid rise of “Farmer’s Daughter,” he is sure to break the million mark soon.

Filming the video in rural Franklin, Tennessee, Atkins got a taste of authentic farm life, driving a tractor and bucking hay. Chris Hicky directed the clip which features Atkins’ real-life wife, Tammy Jo, as the “Farmer’s Daughter” whom he ends up marrying.