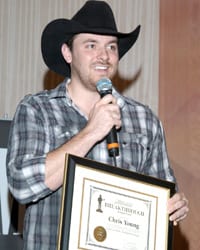 Host Clay Bradley has the magic touch: He actually got the capacity crowd of schmoozers to shut up during the presentation of the MusicRow Awards in the notoriously loud BMI lobby on Thursday (6/24).

“2010 has been an exceptional year for music,” said Clay in greeting the assembled multitude. “We’re proud to represent the greatest creative community in the world. Thank you for coming.”

Clay also announced that BMI is going to match any Music Row flood-relief donations up to $50,000. Go to BMI.com for more info. 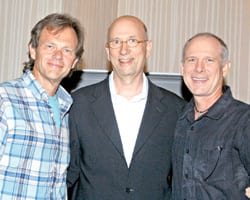 David Ross read a letter from the AFM’s Dave Pomeroy and Craig Krampf thanking the publication for spotlighting session musicians. MusicRow reviewer Larry Wayne Clark is recovering from cancer treatments in Canada. His letter, also read by Ross, was encouraging and concluded with, “We miss the Nashville buzz. But things could be a lot worse.”

Echoing Clay’s sentiment, David added, “I continue to be amazed by the stream of creativity that continues to come from this town.” 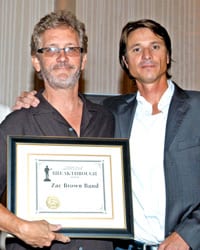 Looking every inch the Southern gentleman in an off-white linen sport coat and South Carolina straw chapeau, Robert K. Oermann stated that, “The past five winners of the Breakthrough Artist Award have been Miranda Lambert, Carrie Underwood, Taylor Swift, Lady Antebellum and Jamey Johnson. So this year’s winner is in excellent company.” Accepting for the Zac Brown Band were its producer, Keith Stegall and Roar management’s Matt Maher.

“Producer of the Year has been an annual MusicRow award since 1982,” said Oermann. “This year, we have two winners, the first time a production team has won.” Frank Liddell & Mike Wrucke accepted for their outstanding work with Miranda Lambert and David Nail.

Ross retook the stage to present the Breakthrough Songwriter Award to Chris Young. Chris told of how his do-or-die hit “Getting You Home (The Black Dress Song)” struggled up the charts. With plaque in hand, he added, “This is going on my wall immediately after I leave here.”

To the delight of one and all, he sang his winning tune. Splendidly. 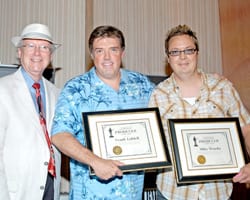 “No one is more surprised than Allen and me,” said Tom. He recalled that it was pitched to Scott Hendricks, who sent it along to Blake Shelton, who gave it to his fiancée Miranda Lambert, who took it on a four-week trip to No. 1. “God’s fingerprints are on all of this,” said Allen. “I like it!” added publisher Troy Tomlinson.

Allen and Tom performed their special composition and mesmerized the crowd, swapping verses while playing guitar and piano, respectively. 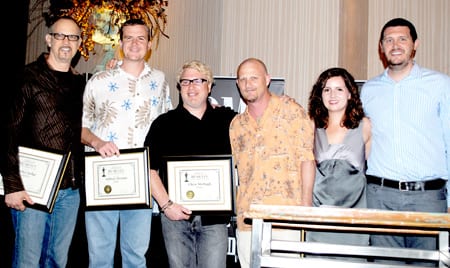