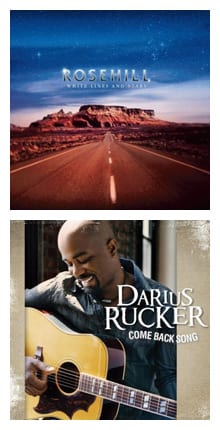 For me, it’s a very, very good week when there are four solid contenders for a DisCovery Award. Michael Sarver, Savannah Jack, Rosehill and No Justice all have debut singles that deserve the honor. But only one of them has the brilliant Radney Foster sitting in the producer’s chair. That would be Rosehill. Salutations, brothers!

All four of those records are also good enough to be contenders for Disc of the Day. So is the inspirational item from Ty Herndon. If you’re into bluegrass, it doesn’t get much better than The Grascals. And Mandy Barnett, as usual, is a delight.

But at the end of the day, Darius Rucker could not be denied. “Come Back Song” is as cool as the breeze.

DARIUS RUCKER/Come Back Song
Writer: Darius Rucker/Chris Stapleton/Casey Beathard; Producer: Frank Rogers; Publisher: Cadaja Music/House of Sea Gayle Music/New Son of a Miner Songs /Sony/ATV Acuff Rose Music/ Six Ring Circus Songs; Capitol Nashville
—Insanely catchy and kind of like a Hootie tune. It seems to me that his singing becomes more and more relaxed and less mannered the deeper he wades into the country idiom. Whatever the case, this is his strongest Nashville single to date.

TY HERNDON/Journey On
Writer: Caleb Collins/Ty Herndon; Producer: Ty Herndon & Wayne Haun; Publisher: Sunset Gallery/Journey On, no performance rights listed; Funl (track)
—Ty’s latest is a gospel outing, and this is its title tune and 2010 single. As always, he sings with immense expression and range. Blessed with a soaring melody and a gorgeous arrangement, this is truly inspirational sounding.

NO JUSTICE/Love Song
Writer: none listed; Producer: Dex Green; Publisher: none listed; Carved (track) (www.nojustice.com)
—This band is evidently a big deal down in Texas and Oklahoma. The sound here is big, beefy and rocking, with a soulfully raspy lead vocal. A hillbilly ZZ Top?

SAVANNAH JACK/I Know
Writer: Don Gatlin/Rob Crosby/Billy Montana; Producer: none listed; Publisher: Singing Honey Tree/Ann Wilson/ICG/Mike Curb/House of Moraine, ASCAP/BMI; McMurry (www.savannahjack.com)
—They harmonize splendidly. The electric guitar accompaniment is somewhat loud and overdone. But every time they swung into those trio choruses, I got hooked all over again.

DOUG ADKINS/Why Not
Writer: Doug Adkins; Producer: Brent Mason; Publisher: Lyric Mountain, BMI; Lyric Mountain (track) (www.dougadkins.com)
—Talk about “country,” this is one big, fat slab of honky-tonk music. He drawls like a true “old school” baritone. The steel and twang guitarists have a field day. And any song that starts with, “Why not one more drink?” has got to have grit. A roadhouse roar.

MANDY BARNETT/Walking After Midnight
Writer: Don Hecht/Alan Block; Producer: Larry Klein; Publisher: Sony-ATV Acuff Rose, no performance rights listed; Favored Nations (track) (www.crazy-themovie.com)
—Next Tuesday sees the release of the DVD and CD soundtrack to the indie film Crazy: The Hank Garland Story. Garland was the greatest of all the early Nashville guitar pickers, and he is portrayed brilliantly in the flick by Sammi Smith’s son Waylon Payne. The plot takes quite a few liberties with the historical facts, but the music holds up brilliantly, with country classics revived by Shawn Colvin, former dance-pop hitmaker Stacy Earl, jazz chanteuse Madeleine Peyroux and more. Ms. Barnett is completely captivating on her version of this Patsy Cline standard.

MICHAEL SARVER/Ferris Wheel
Writer: Thibodeau/Kyle Jacobs/Charles Kelley; Producer: Michael Sarver & Rachel Thibodeau; Publisher: none listed; Dream/Fontana (track) (www.michaelsarversite.com)
—Sarver was a contestant on American Idol’s Season 8 in 2009. His feathery tenor is perfect for this dizzy, swirling tune about being giddy in love. The little falsetto notes he tosses in are charming. Promising as all get out.

THE GRASCALS/Last Train To Clarksville
Writer: Tommy Boyce/Bobby Hart; Producer: The Grascals; Publisher: Screen Gems EMI, BMI; Rounder (track) (www.grascals.com)
—It will come as no surprise to most of you that this Monkees oldie works splendidly as a country tune. In fact, Ed Bruce put out as a single back in 1967. Now the song is a bluegrass single, complete with banjo, mandolin and fiddle solos. I hear that the band is working on a video of it this week. Enjoy.