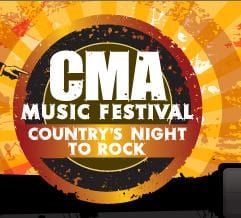 ABC TV is heading to Nashville to take fans to the hottest music event of the year with CMA Music Festival: Country’s Night to Rock. Between Thursday and Sunday, June 10-13, today’s biggest country stars will hit the stage during a four-day celebration of America’s music for a special that will air Wednesday, Sept. 1 (7:00-10:00 PM/CT) on the ABC Television Network.

“Our announced lineup this year is the strongest ever and a country music enthusiast’s dream bill,” said Steve Moore, Chairman of the CMA Board of Directors.

The primetime television special, CMA Music Festival: Country’s Night to Rock, debuted in 2004 as a two-hour special highlighting the Festival and Music City. In 2005, the special moved to the ABC Television Network.
In 2009, the special expanded to three hours boosting ABC ahead of CBS, NBC and FOX with the network’s second biggest audience during the summer season. With 7.4 million viewers and a 4.7/8 overall rating, it outperformed its broadcast rivals in total viewers topping CBS by 6 percent, NBC by 32 percent and FOX by 85 percent.

The special had a 43 percent increase in viewers compared to 2008, generating the biggest audience in four years and tallied its highest Adult 18-49 rating (2.0/6) in three years. The special ranked No. 12 for the week among total viewers and No. 11 for the week for Adults 18-49.