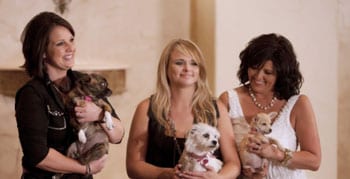 Miranda Lambert hosted the 3rd Annual Cause for Paws Event last weekend and the numbers are in – $91,000 was raised through ticket sales, sponsorships and auction items at the sold-out event. GAC’s Nan Kelley donated her time to guest host the crowd of over 800 people. Purina Chef Michael’s Canine Creations was the main sponsor at this year’s Cause for Paws. Attendees enjoyed dinner and a concert featuring Lambert and her band along with special guests Nightwork, Kacey Musgraves, Whiskey Myers and a surprise appearance by Blake Shelton.

During the encore, Lambert stunned the audience by inviting her surprise special guest to the stage, fiancé Blake Shelton. She agreed to donate $2800 for him to come on stage and sing his No. 1 hit single “Hillbilly Bone” and then invited the crowd to come up and donate more money as the couple sang together for “tips.” Over $1000 was collected from the fans during the song. Another fundraising highlight was a rare Gibson Goddess electric guitar autographed by members of ZZ Top and Miranda that was the top selling item at the live auction bringing in $8000.00

“It is the best feeling in the world to know we are helping in the fight to treat and find homes for abandoned and abused animal,” says Lambert. “Since we started working with the Humane Society of East Texas over 3 years ago, we have donated over $325,000 and they have become a ‘no kill’ shelter. Every year it amazes me that people spend their hard-earned money to partner with us in this fight. I am very grateful!”

“This year’s event was the best so far,” said Bev Lambert, who is the Director of MuttNation.

“Miranda was able to bring her full band to her home community and it was the first time many in the area had seen her perform. There was definitely electricity in the air!”

Bev Lambert recently visited the shelter and was able to view the improvements that have taken place over the course of the past three years:    “Just knowing that MuttNation Foundation is helping to take care of them is the most satisfying feeling. All year long our committee works hard on the event and one look into the eyes of the dogs and cats at the shelter makes me motivated to do even more next year.”

This year, in addition to the East Texas Humane Society, funds were given from Lambert’s hometown to Kelley’s hometown to help animals affected by the recent Nashville flood. The Humane Assocation of Nashville was presented with a plaque and special donation of $3,600, collected by the Lindale Independent School District’s Nickels for Nashville campaign.