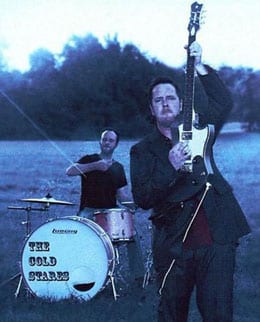 Nashville rockers The Cold Stares are among 10 finalists in the running to perform at Hard Rock Calling 2010 in London’s Hyde Park with Paul McCartney, Stevie Wonder, Pearl Jam and more. The rock duo are to be international representatives for Nashville in the online voting to commence May 25 via  http://battle.ambassadorsofrock.com/thecoldstares/

Back in April, the Cold Stares won the last local phase of the Ambassadors of Rock Battle of the Bands held at Hard Rock Cafés all over the United States. They were then handpicked by a distinguished panel including the E Street Band’s Little Steven; Doug Brod, editor of Spin Magazine, Toby-Leighton Pope, VP of Promotions for Live Nation, and previous winner, Rudy Vaughn of The Rudy Vaughn Band.

The Cold Stares – Chris Tapp on guitars and vocals and Brian Mullins on drums – performed together for almost two years before beating out the competition at Nashville’s Hard Rock.

“With Nashville being known to the outside world as primarily country, I believe we can get our fellow Nashvillians to help us show the world that Nashville rocks and bust that stereotype,” Tapp says. “It would be so great for Nashville to represent the U.S. instead of New York or Los Angeles. Our sponsors WRLT are also helping to get out the vote. A spot on the London stage should belong to Music City in 2010!”

The Cold Stares will be recording their full length debut album in July. Their EP is currently available on itunes and other retailers. Recent shows in Nashville included 3rd & Lindsley with the Verve Pipe, and a flood benefit at the Hard Rock Cafe.