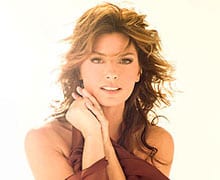 People magazine reports that country superstar Shania Twain is getting ready to star in her own television show. Why Not? With Shania Twain, an hour-long series, will premiere on OWN: The Oprah Winfrey Network.

“The show will follow [Twain] as she begins her climb back to the top, a personal journey filled with risk, revelations and unexpected adventures,” said a statement from the network.

This won’t be Twain’s first on-camera experience since her estrangement from husband/producer Robert “Mutt” Lange. In addition to her January appearance as an audition round guest judge on American Idol, the singer has been posting personal videos on her website in recent months, chronicling her travels and family life.   An air date for Why Not? With Shania Twain has yet to be announced.