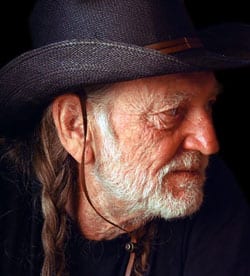 Willie Nelson’s latest release, a collection of classic country songs aptly titled Country Music, will have a prominent promotional profile thanks in part to Starbucks and PBS‘ Soundstage. Produced by T Bone Burnett and released on Rounder Records, Country Music is set for release on April 20.

Starting on the album’s street date, the CD will be available for sale at all Starbucks stores for four weeks.

As part of the lineup of its eighth season, popular PBS live-music series Soundstage will also celebrate Country Music when it begins airing an episode featuring Nelson and his-eight piece band in an intimate setting with fans gathered around the stage. Soundstage featuring Nelson will begin airing nationally on Feburary 25. Check local listings for air times. Country Music’s deceptively simple concept is reminiscent of Nelson’s 1978 release, Stardust, a critical and commercial triumph which found the singer interpreting classics  from The Great American Songbook.