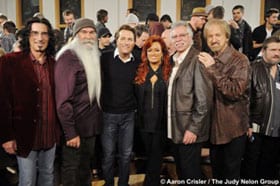 “The crisis in Haiti has left us all trying to figure out how we can help,” says Smith. “We wanted to create something that the community could support, for the greater good of those in Haiti. Everyone gave of their time: the studio was donated, the musicians donated their time and all proceeds from this song will go to designated charity/relief work through The American Red Cross and Samaritan’s Purse. It’s incredible to be part of something that is going to help so many people.”

In addition to lending their voices in song, several artists also recorded PSA’s for The American Red Cross and Samaritan’s Purse for use in upcoming months.