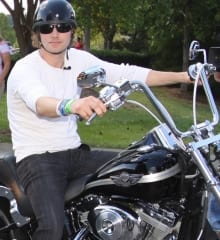 Dierks Bentley will host his fourth annual “Miles & Music for Kids” celebrity motorcycle ride and concert on Sunday, Oct. 11 in Nashville.  Sponsored by Nationwide Insurance, all proceeds from the event will benefit the Monroe Carell Jr. Children’s Hospital at Vanderbilt, a Children’s Miracle Network Hospital. The hour-long ride will weave through Williamson County and end at Riverfront Park in downtown Nashville with a concert featuring Bentley and special guests including his label-mates Darius Rucker, Eric Church and others. Tickets go on sale August 15 at Ticketmaster.

Reba McEntire will perform songs from her upcoming album, Keep On Loving You, on an upcoming one hour television special on CMT. Invitation Only: Reba McEntire, will premiere Aug. 21 at 8 p.m CT and will feature McEntire singing new songs and greatest hits before a small studio audience in Nashville.

Larry the Cable Guy’s July 4 performance in Lincoln, Nebraska, was recorded for a Comedy Central Special. The show is called Larry The Cable Guy—Tailgate Party, and will air in February, the weekend before the Super Bowl. The audio from Tailgate Party will be released on Sept. 15. In November, the Larry the Cable Guy’s Hula-Palooza Christmas Luau is set to air, featuring performances from Zac Brown Band, Billy Currington and much more.