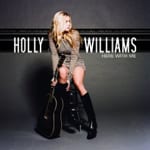 Despite the presence of a number of marquee names in this week’s reviewing stack, the award winners are the lesser knowns.

Up-and-comer Holly Williams lands her first Disc of the Day honor. By the way, her excellent last single (”Keep the Change”) was not co-written by her sister, but rather by Hillary Lindsey. The label information was incorrect. 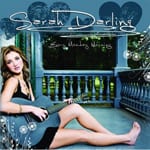 Our DisCovery Award goes not to a major-label artist, but to a lovely Nashville indie lass named Sarah Darling. If you have any doubts that she can deliver live, there’s a clip on her website of her performing “Don’t Love Me” (also on the album) at Puckett’s.

HOLLY WILLIAMS/Mama
Writer: none listed; Producer: Justin Niebank & Holly Williams; Publisher: none listed; Mercury
—Produced with acoustic sparkle, this upbeat ode to mama is also written with deep truth and gifted with a delicious melody. Holly seems to improve in giant steps with each release. I think I’m falling in love.

JEFF GRIFFITH/Dip Me In Beer
Writer: Jeff Griffith/Hobson Smith; Producer: Bill Green; Publisher: none listed, BMI; BGM (888-455-5504)
—He wants to be thrown into “a redneck mosh pit,” whatever that is. Who says nobody makes honky-tonk music anymore? You don’t get any more “honky” than this.

THE PARKS/As Long As You’re Goin’ My Way
Writer: Johnny Park/Clint Park/Brett Beavers; Producer: Johnny Park & Clint Park; Publisher: WB/Warner-Tamerlane/Sony-ATV Tree/Run the Trotline, ASCAP/BMI; Carolwood
—The production is too “busy” sounding, the vocal is mixed too low in it, and the song doesn’t kick in until they get to the chorus.

DOLLY PARTON/Everyday People
Writer: Sylvester Stewart; Producer: Mike Post; Publisher: none listed; RCA Legacy (track)
—What a gal: Her 9 to 5 musical opens on Broadway, and one week later it is nominated for four Tony Awards! The 1980 movie that inspired it also inspired a Dolly concept album called 9 to 5 and Odd Jobs. That LP has now been reissued on CD with three bonus tracks including this previously unissued, sprightly rendition of the Sly and the Family Stone classic. The other two bonuses are a frothing disco remix and a karaoke track of the title tune.

TRACE ADKINS/All I Ask For Anymore
Writer: Casey Beathard/Tim James; Producer: Frank Rogers; Publisher: Sony-ATV Acuff-Rose/Warner Tamerlane/T Bird’s, BMI; Capitol Nashville (track)
—Trace with a string section? You bet. On a stately, inspirational, common-man ballad, no less. I’ve always said this guy is underrated as a vocalist, and this is one of his most expressive performances ever.

NATHAN LEE JACKSON/Small Town Rain
Writer: none listed; Producer: Jeff Glixman; Publisher: none listed; CO5/Star City (615-469-1756)
—Nicely done. The production rocks happily, and his earnest vocal is as comfy as a well-worn shoe. This kid has the goods.

CHARLIE ROBISON/Beautiful Day
Writer: Charlie Robison; Producer: Charlie Robison; Publisher: Bantex, BMI; Dualtone (track) (www.dualtone.com)
—The title tune to Charlie’s new CD chronicles one woe after another in sunny L.A. The track is excellent, with dynamite country-rock guitar and snazzy organ riffs. And it goes without saying that his steeped-in-Texas vocal performance is a winner. Most of the collection is self-penned, but there are also a pair of Keith Gattis tunes, a rocking number courtesy of Bobby Bare Jr. and an evocative cover of Bruce Springsteen’s “Racing in the Street.”

SARAH DARLING/Jack Of Hearts
Writer: Sarah Darling/Marc Beeson/Don Pfrimmer; Producer: Jimmy Nichols; Publisher: Want a Fresh One/Sarah Darling/Crossfire 3/Wounded Sky/EGBE, ASCAP; Black River (track) (www.sarahdarling.com)
—Evidently, Sarah was featured on a 2003 E! network reality show called The Entertainers. You couldn’t prove it by me, but I know a singer when I hear one. The production is percussively perfect, and the extremely well written song has a melodic hook and/or an ear-catching line around every corner. The album is called Every Monday Morning, and I strongly urge you to give it—and this single—your full attention.