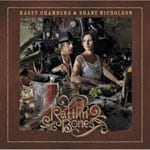 They may call this genre “Americana,” but the Disc of the Day comes from overseas this time.

Kasey Chambers & Shane Nicholson have a current CD called Rattlin’ Bones that is a must-own for anyone in love with soulful, mountain-soaked music.

My other two favorites in this listening session both came from veterans. It sure is good to have Danny O’Keefe back, and Barry & Holly Tashian remain absolutely charming as warm, homey music makers.

DANNY O’KEEFE/The First Time
Writer: Fred Koller/Danny O’Keefe; Producer: Mike Conley; Publisher: Lucrative/Bicameral, BMI; OK (track) (www.dannyokeefe.com)
—Recorded in Nashville, In Time is Danny’s first new album in eight years. Has it really been 37 years since “Good Time Charlie’s Got the Blues” made him a name? Judging by what’s in these grooves, the years have been more than kind to this singer/songwriter. The collection leads off with this cleverly penned and wonderfully melodic song. Danny’s singing is terrific, but if he doesn’t have a hit with this, somebody ought to pitch it to some major-label country star. In addition to Fred Koller, Danny’s songwriting collaborators here include such Music City notables as Tim O’Brien, Victor Krauss, Michael McDonald, Fred Knobloch and Beth Nielsen Chapman.

KASEY CHAMBERS & SHANE NICHOLSON/Rattlin’ Bones
Writer: K. Chambers/S. Nicholson; Producer: Nash Chambers & Shane Nicholson; Publisher: Control/Universal, ASCAP; Sugar Hill (www.kaseychambers.com)
—Aussie Kasey became one of Americana music’s finest solo artists during the past decade. As half of a duo, she is equally riveting. The lead track and title tune to this collection is a haunting, bluesy, mountainy, minor-key wail that will stop you in your tracks. It opens the door into a masterpiece of an album.

THE BOXMASTERS/The Poor House
Writer: B. Thornton; Producer: W.R. “Bud” Thornton & J.D. Andrew; Publisher: Salve  Man, BMI; Vanguard (track) (theboxmasters.com)
—I still say Billy Bob Thornton can’t sing. But I’ll give him this much, the lead-off tune to his band’s self-titled, two-CD set is as country as dirt. The first CD is called “Ours” and consists of originals. The second CD is “Theirs” and contains covers of both pop and country tunes.