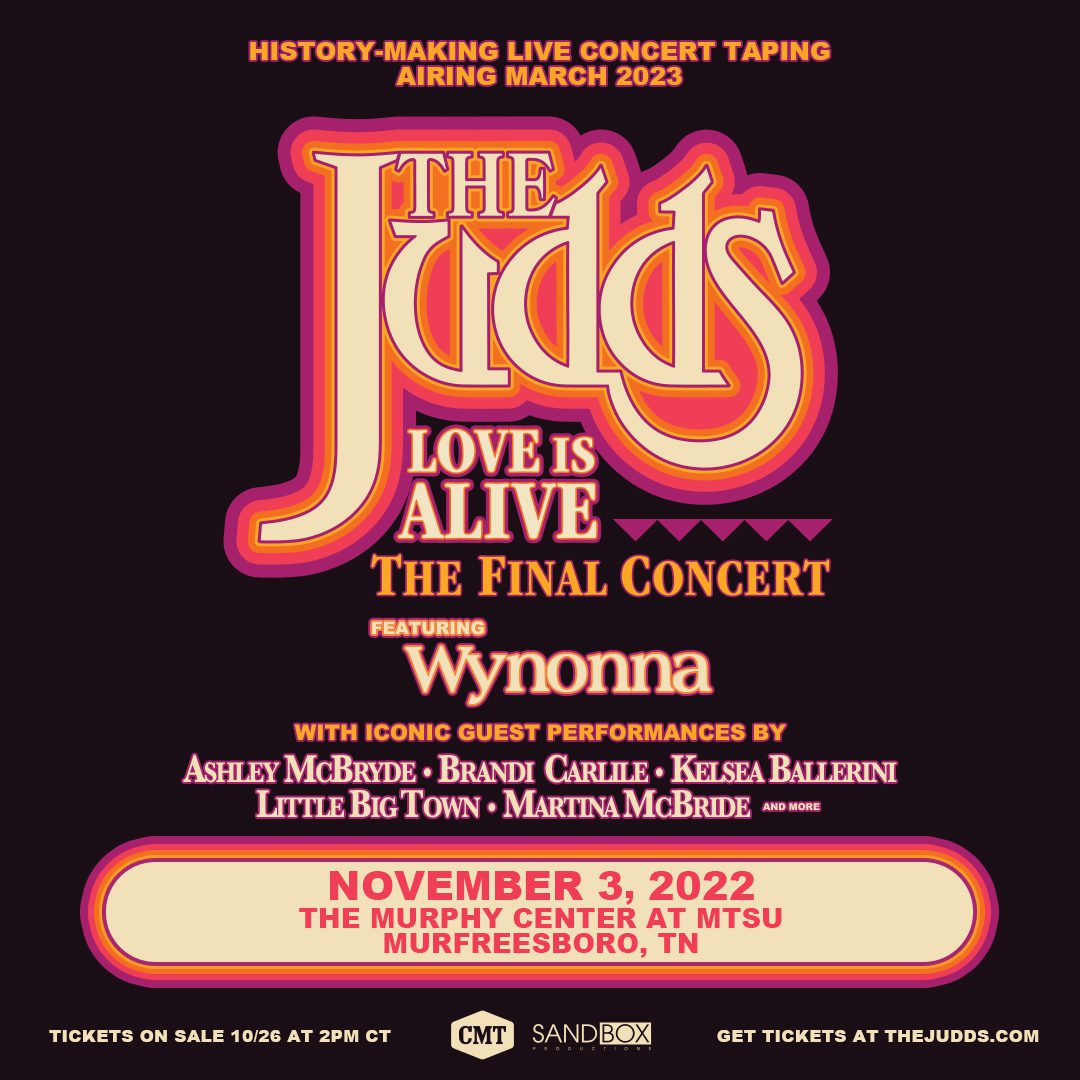 Wynonna Judd will headline a history-making concert event, ”The Judds: Love Is Alive – the Final Concert,” on Nov. 3 at the Murphy Center at Middle Tennessee State University.

Presented by CMT and Sandbox Productions, the special show will recreate “The Judds 1991 Farewell Tour” for a televised event airing in March 2023 on CMT. Wynonna’s current tourmates Ashley McBryde, Brandi Carlile, Kelsea Ballerini, Little Big Town and Martina McBride are slated to join, with additional guests to be announced in the coming weeks.

“Stepping onstage at the Murphy Center for the first time since Dec. 4, 1991 will be so surreal for me. It was an emotional night over 30 years ago and will be an emotional night, for different reasons, now,” Wynonna explains. “I can’t wait to lean into the nostalgia with the artists who have made this tour so special, and recreate one of the most iconic nights in Judd ‘Herstory!’”

“It’s serendipitous magic on so many levels to be able to capture Wynonna’s return to the Murphy Center, almost exactly 31 years to the date. And it’s especially meaningful as an MTSU alum to produce such a landmark event, working hand in hand with the university’s faculty and staff to have their students actively participate in the production in its entirety,” notes Margaret Comeaux, Executive Producer & SVP of Production, Music & Events, CMT. “We are also extremely excited to collaborate once again with our amazing partners at Sandbox to present a true Judds event spectacular that has been decades in the making, and continue to tell the next chapter in Wynonna’s story.”

This homecoming to MTSU will mark the largest concert to take place at the iconic Murphy Center since Wynonna and her mother, Naomi Judd, had their final show together on “The Judds Farewell Tour” over three decades ago.

Tickets for the show are on sale now, with a portion of proceeds benefiting NAMI Tennessee.