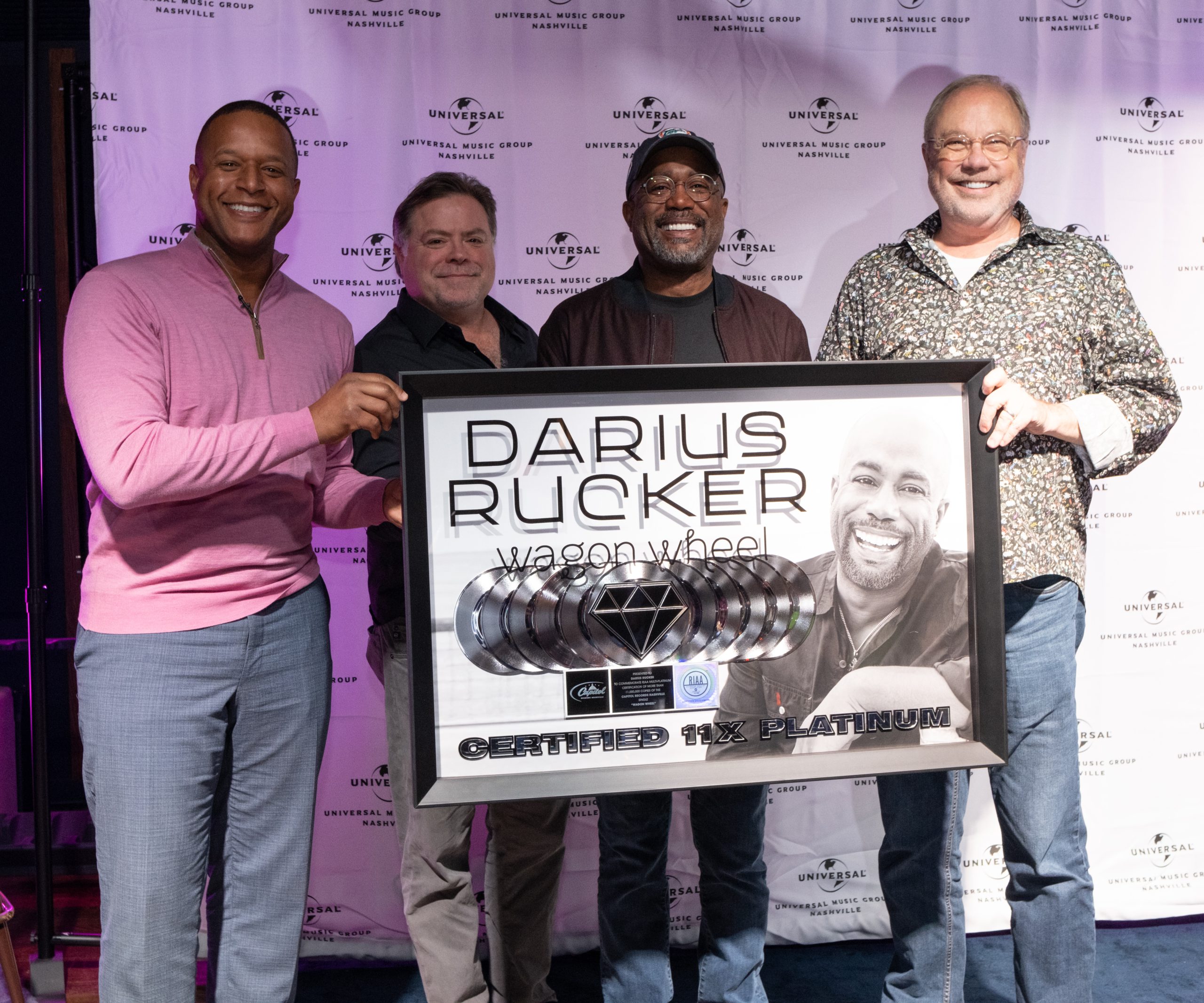 There are now four country songs that are certified Diamond by the RIAA, signaling 10,000,000 units consumed. They are “Cruise” by Florida Georgia Line, “Tennessee Whiskey” by Chris Stapleton, “Old Town Road” by Lil Nas X and Billy Ray Cyrus, and now, “Wagon Wheel” by Darius Rucker.

The multi-Platinum artist released “Wagon Wheel” in 2013 for his True Believers album. It was originally recorded by Old Crow Medicine Show and written by the band’s Ketch Secor after he discovered an unfinished Bob Dylan demo of him singing what is now the “Wagon Wheel” chorus. While it has been an instant classic since OCMS first released it in 2004, Rucker’s recording has taken on a life of its own, transcending country radio into the cultural zeitgeist.

To celebrate this accomplishment, UMG Nashville held a ceremony to present Rucker with a plaque. The party also celebrated Rucker’s tenth No. 1, “Beers And Sunshine,” which hit the top of the charts in early 2021.

Kelly Sutton served as emcee for the event, first recognizing the co-writers of “Beers And Sunshine,” Rucker, Josh Osborne, Ross Copperman and JT Harding. The writers shared their thanks to all the responsible parties for “Beers And Sunshine” going No. 1, such as UMG Nashville, their respective publishers, and PROs. ASCAP’s Mike Sistad and BMI’s Josh Tomlinson were also there to represent their writers. 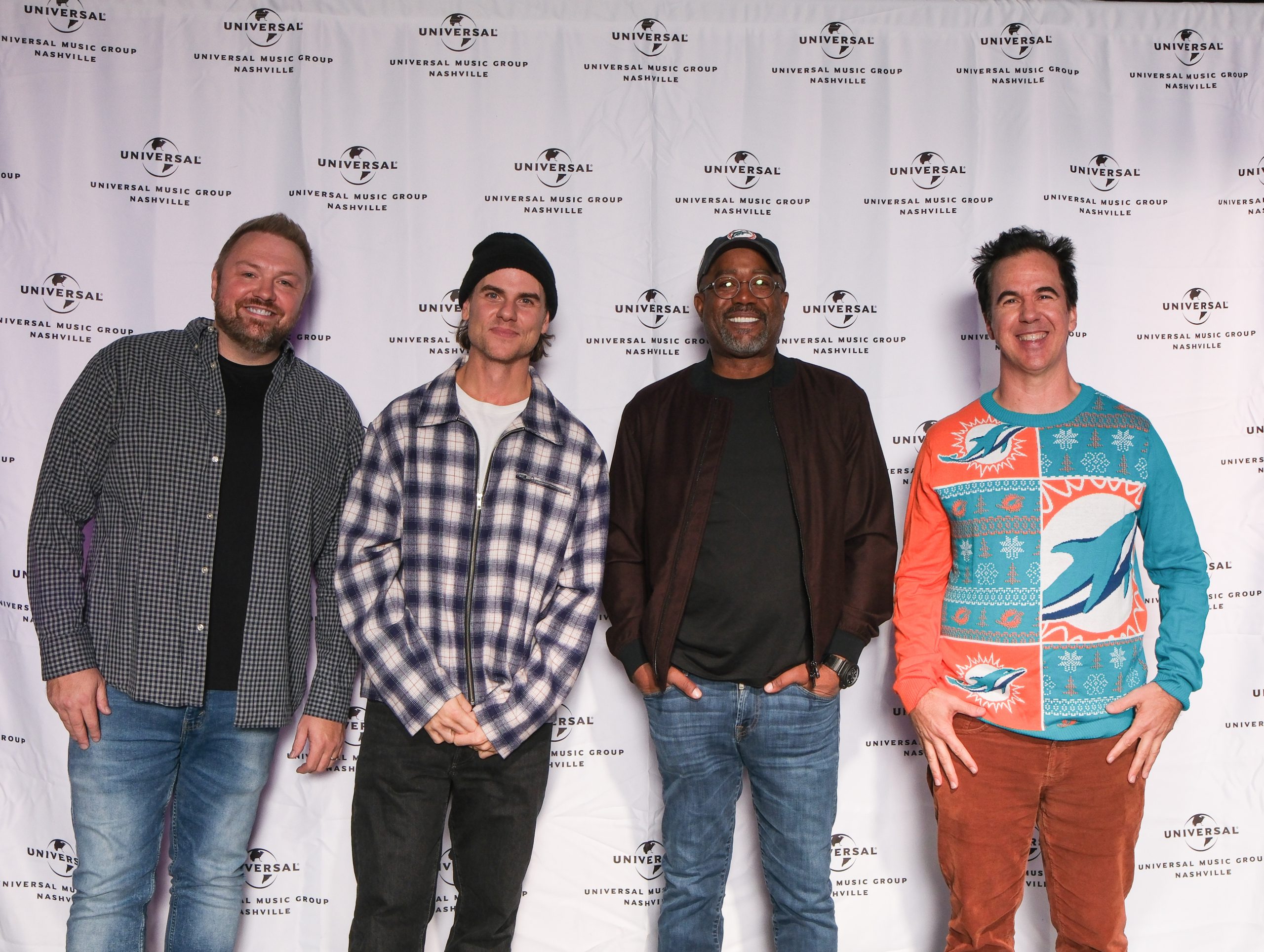 In each of their speeches, the writers talked about the Zoom meeting that the tune was written on, guessing that “Beers And Sunshine” might have been the first country No. 1 written on Zoom.

“There’s no nonsense on Zoom. In the [writer] room, you sit around and talk about your kids. You tell them what’s going on and it takes 20 minutes to get started. Not on Zoom!” Rucker said. “When we finished it, I thought it was something special. Ross went out of his way to record this whole record on Zoom. Nobody was ever in the same room together ever.

“I want to say thank you to Universal, ASCAP, and Sony,” Rucker added.

Next, it was time to shift gears to celebrate “Wagon Wheel.” Sutton welcomed UMG Nashville Chairman and CEO Mike Dungan to the stage to say a few words about his partnership with Rucker.

“The truth is, it was a big leap of faith on everybody’s part,” Dungan said of UMG signing on to usher in Rucker’s country career. The label head pointed out that not only was Rucker in limited company as a person of color in country music, but he had also fronted the ’90s hit band Hootie & The Blowfish, who became so popular that they became a punch line. Forging a new path into country music stardom did not sound easy to Dungan, but with 10 No. 1 hits and a Diamond-certified single, it paid off to take a risk.

“To be here all these years later celebrating all these hits is amazing,” he said. “I couldn’t be prouder, my friend. I love you like a brother.”

The Today show’s Craig Melvin also joined in the presentations. He made sure to recognize Rucker’s philanthropic contributions, specifically to South Carolina where both Melvin and Rucker are from.

Frank Rogers, who produced “Wagon Wheel” and a myriad of other Rucker hits, joined the country star on stage to take a photo with the Diamond certified plaque.

When it was time to hear from the man of the hour, Rucker was full of gratitude for his team.

“I came here just to make a record. I came here because I wanted to make the music,” the country star said. “I can’t thank you guys enough for the life that you’ve given me. My life is so much better because I came to Nashville. Thank you.”