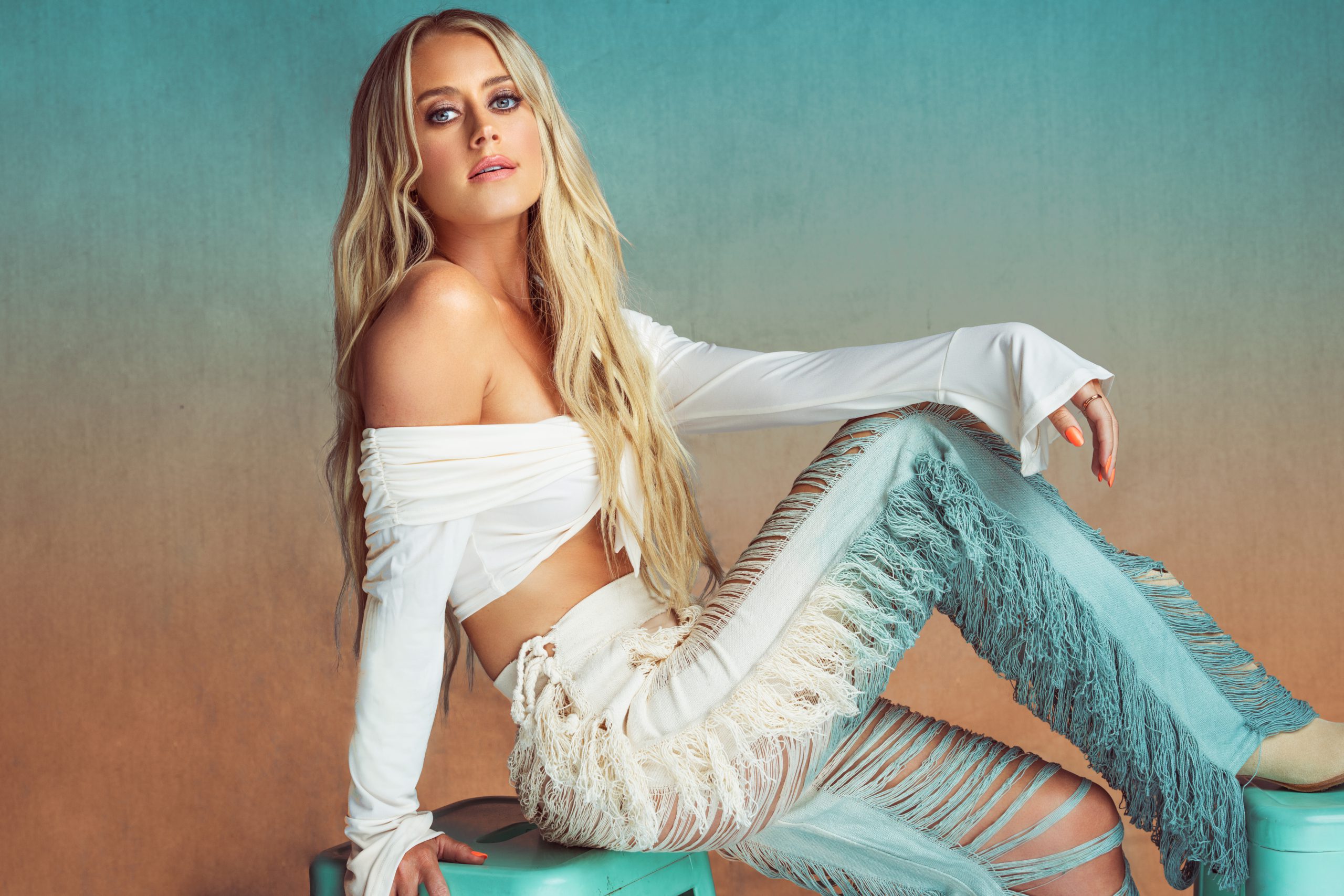 Six years since her last EP, Brooke Eden is releasing her most vulnerable collection to date this Friday (July 29). Entitled Choosing You, the five-song project flexes some of Eden’s writing muscle as she invites listeners into her journey to self-love, empowerment and finding who she really is.

First introducing herself to the world in 2014 as an independent artist before releasing her breakthrough singles “Daddy’s Money” and “Act Like You Don’t” on Red Bow Records, Eden spent several years radio silent before re-emerging in 2021 with a collection of new music and a new level of unabashed confidence.

The budding BBR Music Group artist came out in 2021, publicly embracing who she is as an LGBTQ+ artist. Now, her music reflects that same energy while also sharing her story of self-acceptance.

Within the new EP’s five Jesse Frasure-produced tracks are the sassy, ’70s-inspired “Comeback Love,” the high-flying and imaginative “Off The Ground,” something resembling the perspective of a big sister pep-talk in “Knock,” finding true love and self-love in “Heartless,” and the project’s powerful lead single “Left You For Me,” which marks the first page of Eden’s new musical chapter. 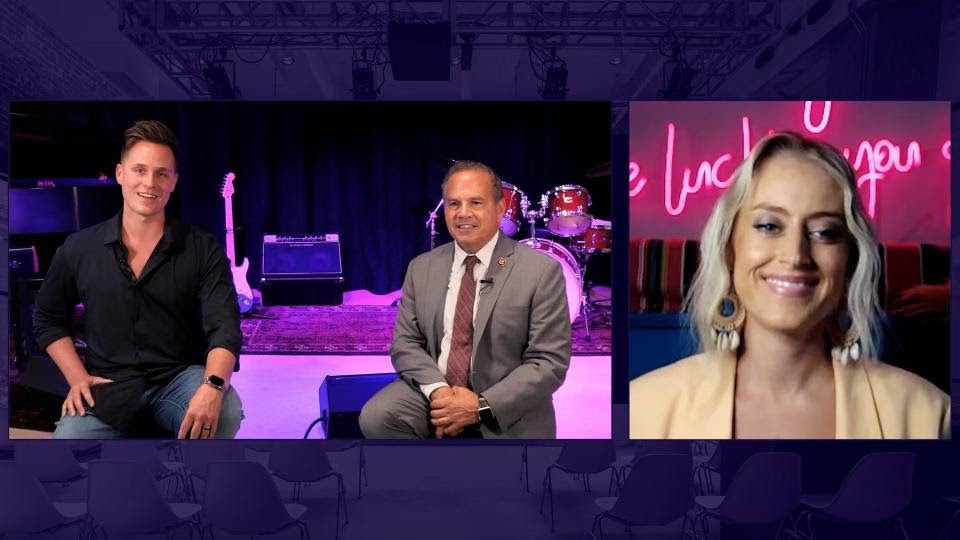 The singer-songwriter also announced a partnership with the RIAA dubbed Music Matters in late May 2022. An initiative that will have Eden appearing in schools, medical centers and recording studios throughout the year, Music Matters is designed to demonstrate how music can enable our authentic voice, give us purpose, connect us to each other and give us strength and courage to navigate life’s challenges. Officially launched on June 23, Eden joined Congressman David Cicilline, Chair of the Congressional LGBTQ+ Equality Caucus, for a conversation surrounding LGBTQ+ equality and representation.

Eden recently sat down with MusicRow to catch up on her last few years, the Music Matters program, and the heart behind Choosing You.

MusicRow: You’ve had an interesting couple of years. What have you been up to leading up to this new EP? 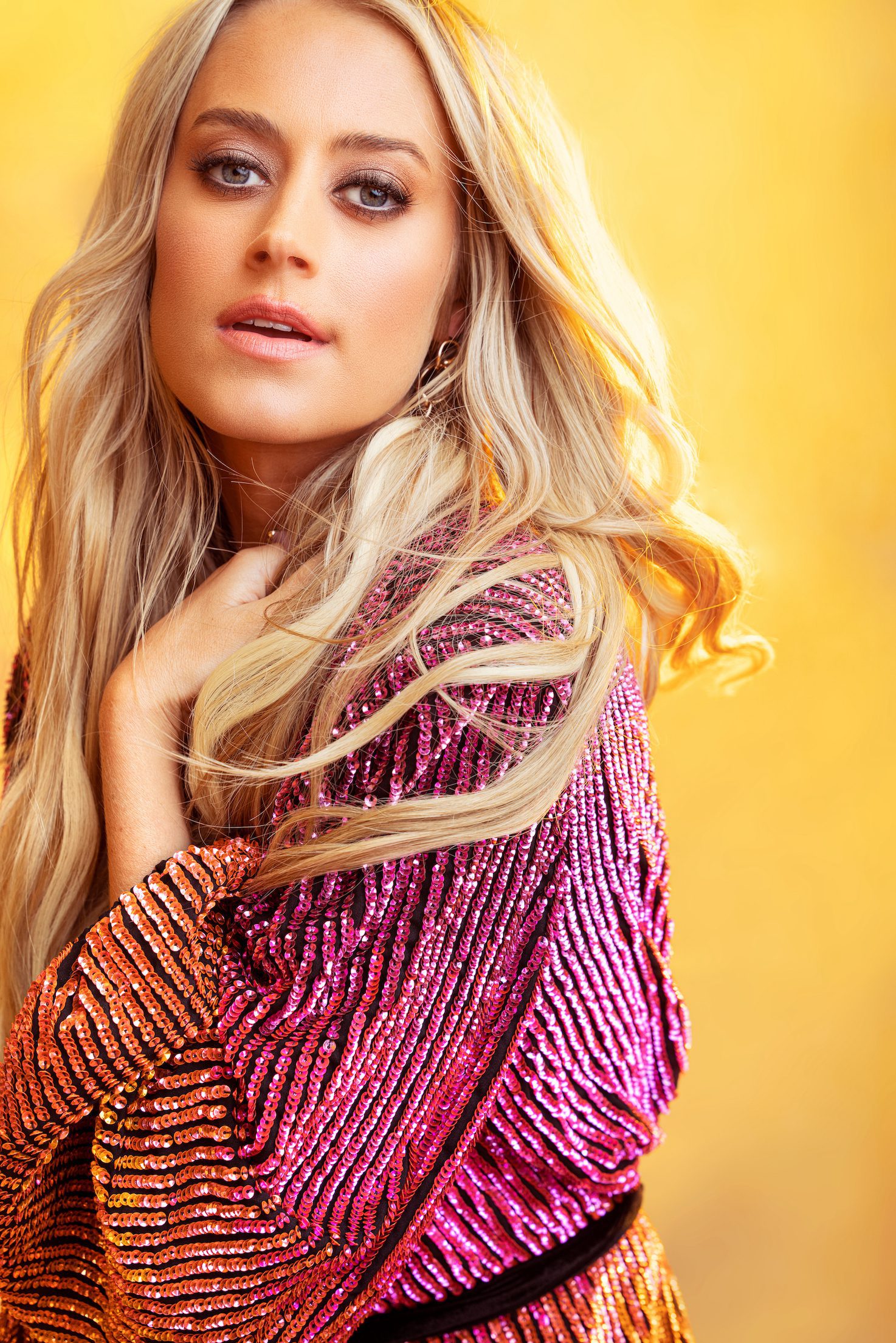 The pandemic was like a reset button or almost like a bullshit button, where you hit the button and all the bullshit disappeared. I realized what was actually important in life. It was a really hard time for the world, but I’m actually really appreciative of it. I don’t know that I would be where I am in my own self journey if it wasn’t for the pandemic and the bullshit button being pushed.

[The pandemic] really intensified and magnified what things are important in my life. It showed me the things that make me happy and forced me to question why am I not living for those things. Why am I trying so hard to make all of these other people happy instead of living my life? The last couple of years have been like my journey to self love and self empowerment. This music is very indicative of that, and it’s just been a wild three years.

There is a common thread of empowerment and self love in this project. Is that the message that you want to communicate or is it something bigger?

This was the time in my life when I felt the most comfortable in my skin. I hope that my life and my story is an invitation for other people to also feel like they can be comfortable in their skin.

If you notice, there’s no song called “Choosing You” or even a lyric that says choosing you. I was driving with my fiancé, Hillary, in the car one day and I was like, “In choosing you, I ultimately chose myself because I finally was able to love like I wanted to love and be loved.”

That’s where Choosing You came from, and I think that’s the thread within all of this. “Left You For Me” and “Knock” are about choosing yourself, then the other three are love songs about choosing a person that allows you to choose yourself and encourages you to be the best version of yourself.

I hope that there’s a lot of self love and self worth that people will take away when they listen to this collection of songs.

You recently launched the Music Matters campaign with the RIAA. What is the origin story of that?

When I was 10 years old, my appendix ruptured during a hurricane. I was in the hospital for 10 days, which was really hard. The thing that got me through was that every other day we had a music therapist come in. Even though I didn’t want to be in the hospital, I knew that if I stayed another day we would get to play music again. That’s what made that awful experience for me doable.

Music has saved my life multiple times. When everybody else turned their back on me, music was always there. I really wanted to bring that to the next generation. My healing process and my journey to becoming myself was all through music and through writing, so I wanted to bring that concept to people who are healing from things and share the message that music can heal you.

What have you done so far through the program? 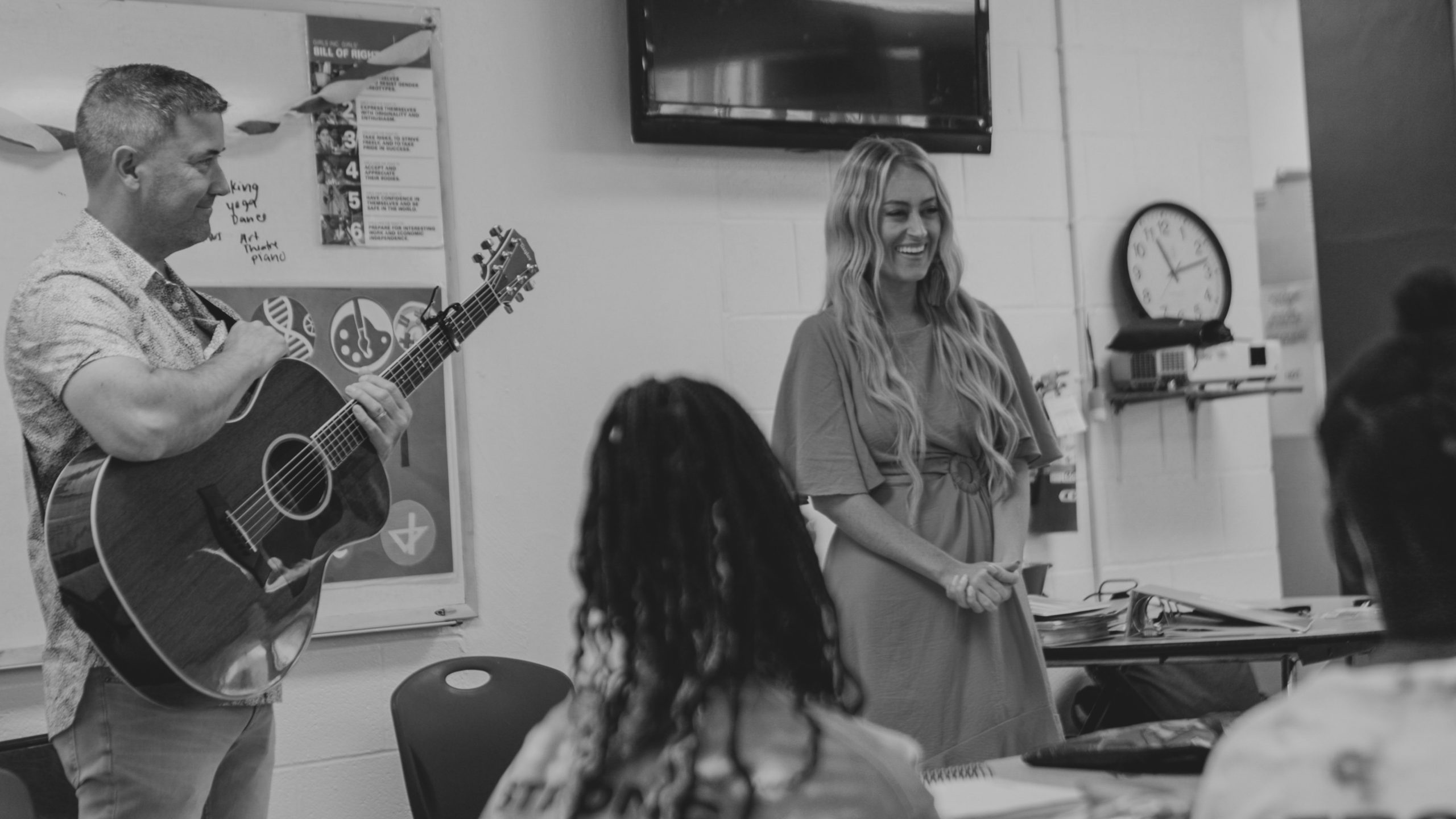 Brooke Eden speaking with young women at Girls Inc. as part of Music Matters with the RIAA. Photo: Courtesy of PFA Media

I also recently spoke with some young women in a group called Girls Inc. about women in business and women in music. A lot of them wanted to be songwriters, singers or members of the industry, so it’s really cool to be able to share what it’s like to be in the industry as a woman and how music can really heal and save your life.

[The goal of Music Matters] is an awareness of using music as a healing mechanism. Music is a universal language. It can unite us in a way that nothing else can. For me, the main message is healing, unity, and bringing people together.

Why does music matter so much to you? What role has music played throughout your life?

For me, especially in my 20s, I was figuring out who I am and what this world looks like to me. So much of my journey to who I am, self love and self worth, was through writing and creating music. 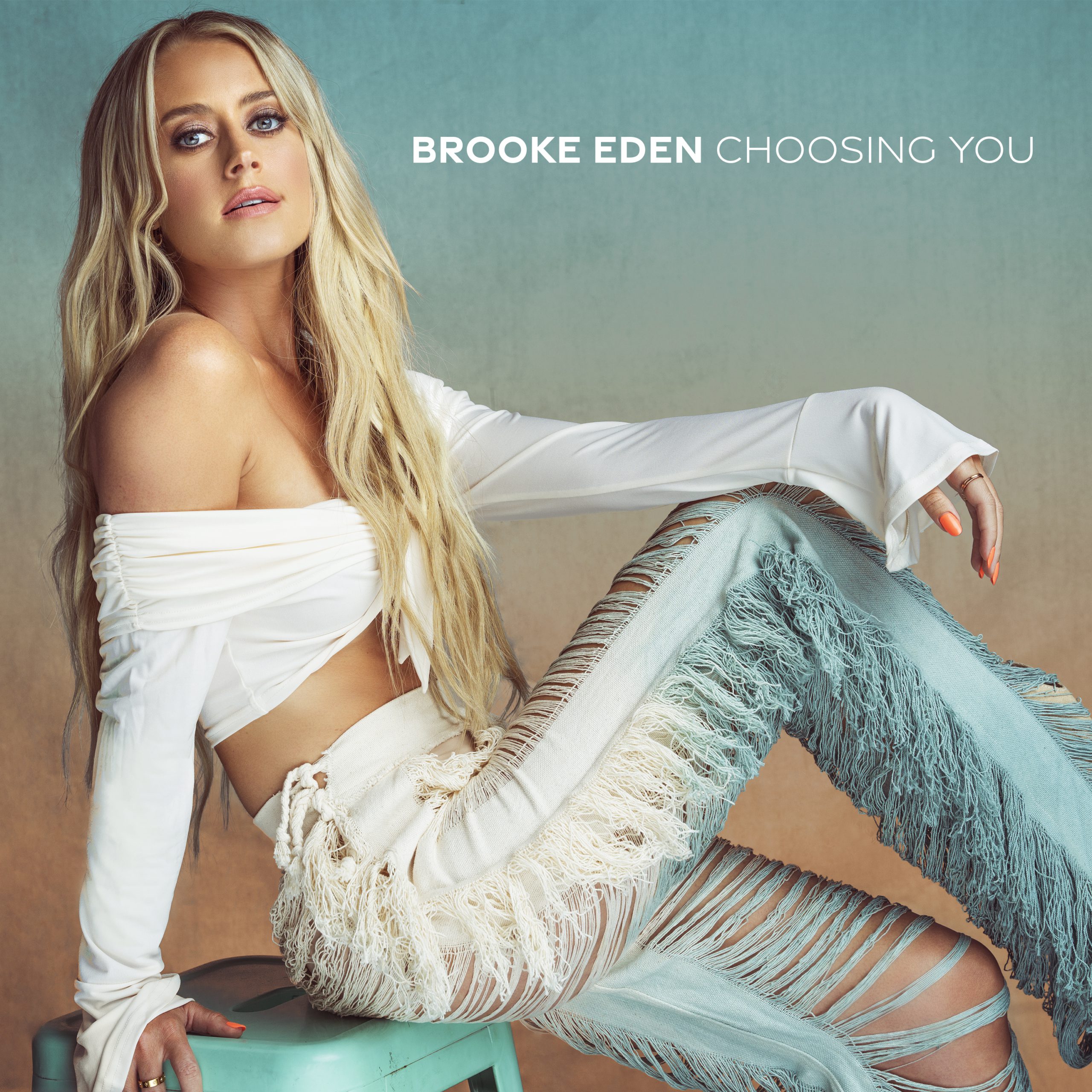 There’s been so many times when music has literally saved me from going too dark. It saved me and allowed me to sing what I couldn’t say. Music is that one thing that we can all come together on. Creating music has made me become the best version of myself.

Is there anything you want to say to your fans who are eagerly awaiting Choosing You?

The biggest thing that I would have people take away from this EP is that you are worthy of everything that you want.

With social media and this perception of what everyone else’s life looks like, it’s really important to look inward and understand that you can achieve anything that you want. You’re deserving of love and happiness, and I hope people hear that when they listen to this EP.