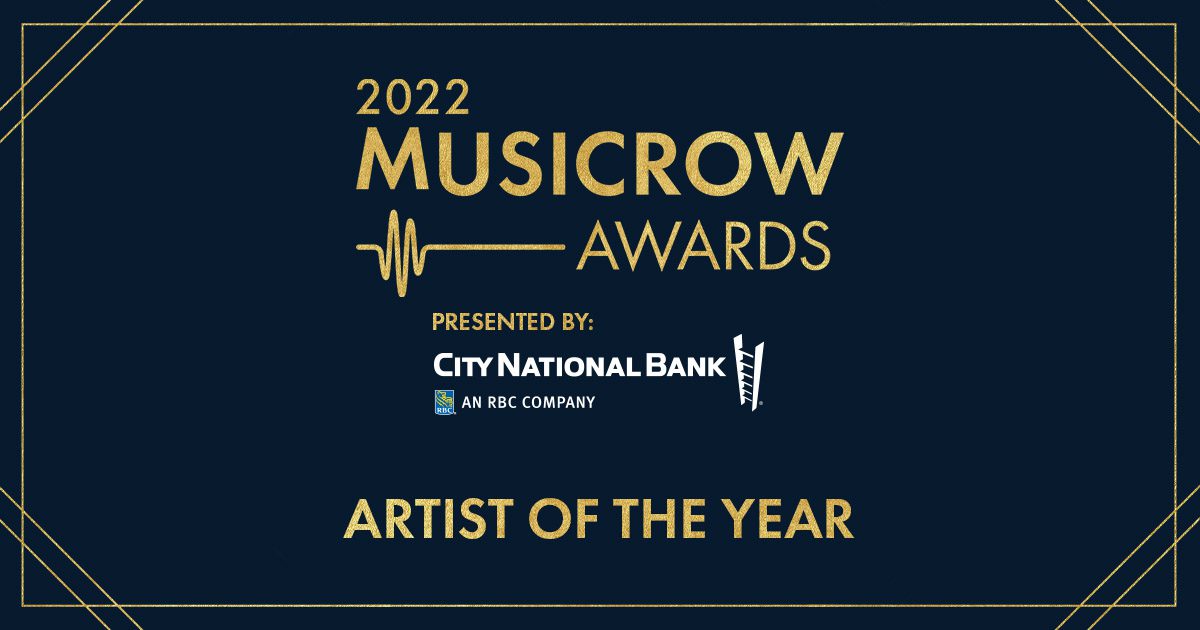 Following the announcement of this year’s nominees for the 34th MusicRow Awards, we take a look at the MusicRow Artist of the Year category. This category is voted on by MusicRow’s subscribed members to honor outstanding achievements by a Nashville artist during the eligibility period of June 1, 2021 to May 31, 2022.

The winners of this year’s honors will be announced online on all MusicRow platforms on Tuesday, August 30. Presenting Sponsor of the 2022 MusicRow Awards is City National Bank.

Winners are determined solely by MusicRow Magazine subscribed members. Voting is now open and closes on July 29 at 5:00 p.m. 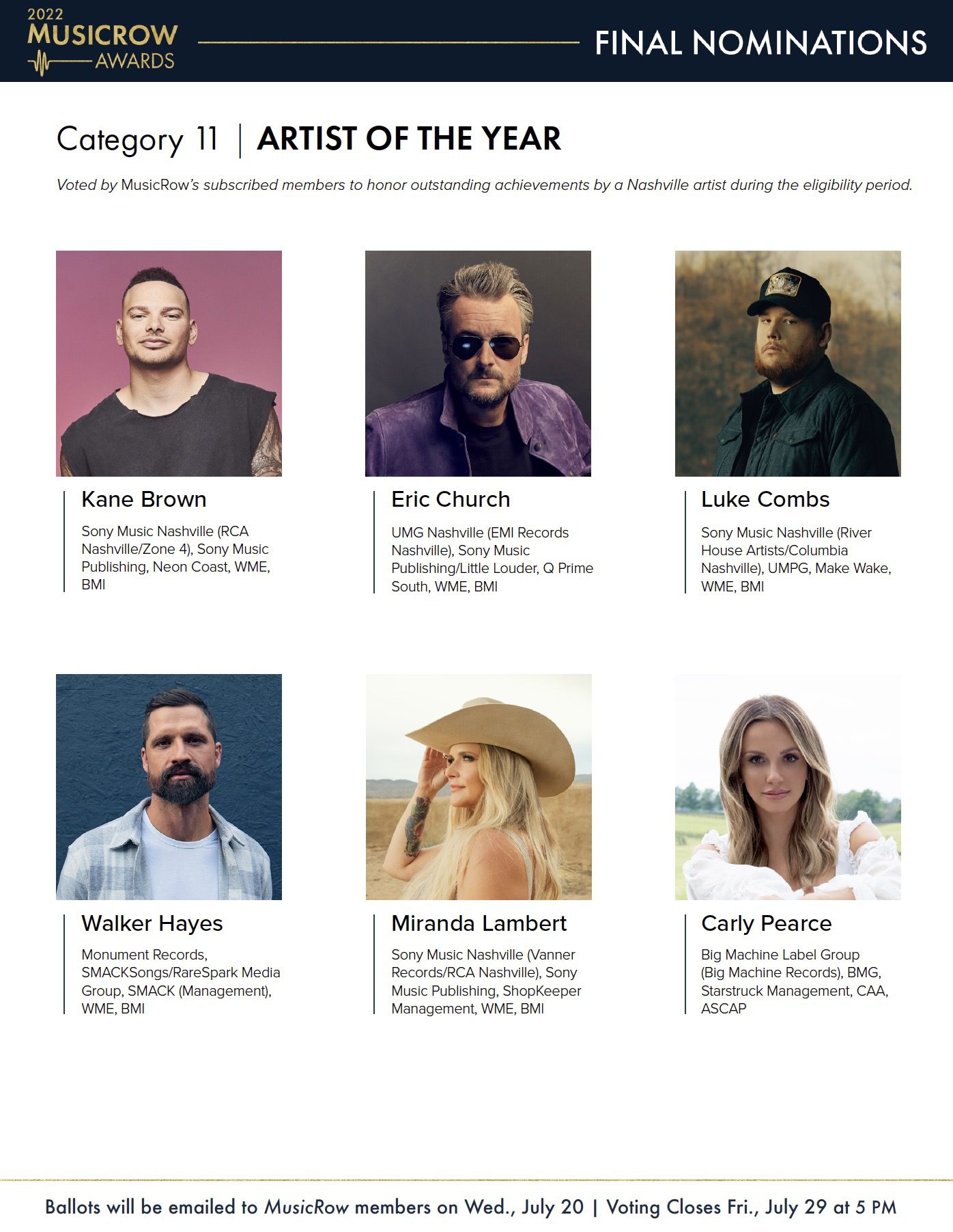 Kane Brown has continued to push the country music format forward since he first came onto the scene in 2016. Over the past year, Brown has released country hits such as “One Mississippi” and “Like I Love Country Music,” and continued his crossover success in pop music with collaborations with Blackbear (“Memory”) and Nelly (“Cool Again”). Brown also celebrated a multi-week No. 1 with Chris Young with “Famous Friends,” an ACM Video of the Year win for “Worldwide Beautiful,” and a highly successful “Blessed & Free Tour,” which made him the first country artist in history to headline every NBA basketball arena in a single tour. He’s also expanded his music business footprint. In early 2021, Brown launched 1021 Entertainment, a joint venture record label with Sony Music Nashville, and signed Restless Road. He is also continually signing songwriters to his publishing company Verse 2 Music. Brown celebrated his first No. 1 as a publisher this year when Verse 2 Music writer Levon Grey, who is nominated for MusicRow‘s Breakthrough Songwriter of the Year this year, co-wrote Brown’s seventh chart-topper, “One Mississippi.”

Eric Church thrilled fans in April of 2021 when he released a three-album project Heart & Soul via EMI Records Nashville. The chart-topping triple album spawned the hits “Hell of a View,” which took home MusicRow‘s Song of the Year award last year, and “Heart On Fire.” Church’s new single from the project, “Doing Life With Me,” is rising at radio now. In June, Church wrapped “The Gather Again Tour,” which hit 55 cities and was named the Top Country Tour at the 2022 Billboard Music Awards. Early this year, Church announced his plans to open a new six-story property at the corner of 2nd Avenue and Broadway in downtown Nashville called Chief’s. The multi-Platinum artist plans to begin renovating the food, beverage and live entertainment space this year. Church’s publishing company, Little Louder Music, which he co-founded with Arturo Buenahora, also celebrated nine years in business, nine songwriters and nine No. 1 hits this year.

Luke Combs has had a transformative year since he won Artist of the Year at the 2021 MusicRow Awards. He notched his 11th (“Forever After All”), 12th (“Cold As You”) and 13th (“Doin’ This”) No. 1 songs, he was named Entertainer of the Year for the first time at the CMA Awards, and he became a father. In June, Combs released his newest album, Growin’ Up, via River House Artists/Columbia Nashville. The 12-song project includes the hit song and current MusicRow Song of the Year nominee “Doin’ This,” the fast-rising “The Kind of Love We Make,” and other fan-favorites such as “Tomorrow Me” and “Outrunnin’ Your Memory” featuring Miranda Lambert. With Growin’ Up, the history-making artist follows up his first two studio albums that both spent more than 25 weeks at the top of Billboard’s Top Country Albums chart–breaking Taylor Swift’s previously held record of 24 weeks. This fall, Combs will hit the road again on his “Middle of Somewhere” tour, and will also play a sold-out show at Atlanta’s Mercedes-Benz Stadium, which ranked among the fastest sell-outs in the venue’s history.

Walker Hayes‘ success transcended country music this past year, after many years of hard work on Music Row. Following the release of his Country Stuff EP in May of 2021, Hayes posted a video on TikTok of him and his daughter Lela dancing to his new song “Fancy Like.” The video went viral and within a month, the track hit No. 1 on Billboard‘s Hot Country Songs chart. It didn’t stop there, though. “Fancy Like” held its top position on the Hot Country Songs chart for over six months, hit No. 1 on the Billboard Country Airplay chart, was nominated for two ACM Awards, and was even nominated for Best Country Song at the Grammys. The song’s relatable, downhome, and somewhat silly message transcended country music, taking Hayes into the stratosphere and allowing him to perform everywhere from the American Music Awards to the halftime show of the AFC Championship game. In January, Hayes released his follow up album, Country Stuff The Album, which contained his quickly rising single, “AA.” Hayes also released his first book, Glad You’re Here, and announced his tour of the same name that will kick off in September.

Miranda Lambert expanded her musical legacy with three different projects over the last year. Alongside Jack Ingram and Producer of the Year nominee Jon Randall, Lambert released a stripped down, campfire love letter to Texas with Grammy-nominated The Marfa Tapes in early 2021. By the fall she teamed back up with her Pistol Annies cohorts, Ashley Monroe and Angaleena Presley, to release Hell of a Holiday. Then in April, Lambert released her eighth studio album, Palomino, via Vanner Records/RCA Nashville. The 15-song album features the singer-songwriter’s recent hit “If I Was a Cowboy” as well as her rising single “Strange.” Lambert, who is the most decorated artist in the history of the Academy of Country Music with 37 trophies, took home her first Entertainer of the Year award in April. The country star opened her new Tex-Mex cantina in downtown Nashville, Casa Rosa, making her the first female country artist-owned establishment on Nashville’s Lower Broadway. Lambert also hit the top of the charts with Elle King on “Drunk (And I Don’t Wanna Go Home),” continuously gave to animals in need with her Muttnation organization, and announced her upcoming Velvet Rodeo Las Vegas residency, kicking off in September.

Carly Pearce released 29, the seven-song project that would change the trajectory of her career, in early 2021. The project was met with wide acclaim, with songs such as “Next Girl” ushering in a new era of honest, vulnerable and downright country music from Pearce. She built on the project’s success with a full length album, 29: Written In Stone. Alongside Ashley McBryde, Pearce scored her third No. 1 single with “Never Wanted To Be That Girl,” which is nominated for Song of the Year at this year’s MusicRow Awards. Her newest single, “What He Didn’t Do,” is currently rising at country radio. Pearce added a CMA Award and 2 ACM Awards to her arsenal this past year, and is the reigning CMA and ACM Female Vocalist of the Year. She took her 29 album on the road before jumping on Kenny Chesney’s “Here And Now 2022” stadium tour. Pearce was also invited to become a Grand Ole Opry member by her hero Dolly Parton, was announced as 2022 inductee into the Kentucky Music Hall Of Fame, and tapped to host of the 15th annual ACM Honors.