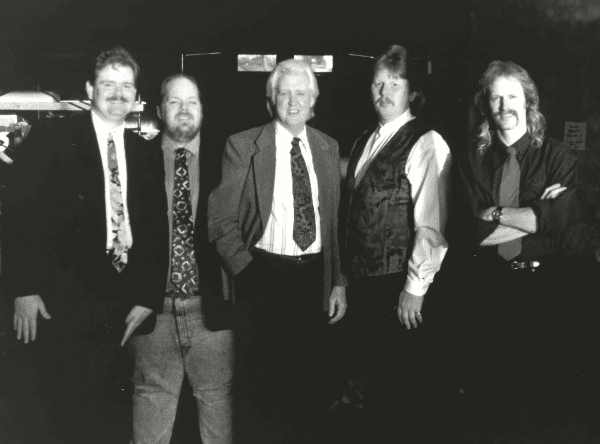 Noted as one of the genre’s greatest banjo stylists, Crowe led The New South, a band that fostered the careers of such future stars as Ricky Skaggs, Jerry Douglas, Tony Rice and Keith Whitley. He also played with fellow Bluegrass Hall of Fame members Doyle Lawson, Mac Wiseman, Vassar Clements and Jimmy Martin.

James Dee “J.D.” Crowe was born in Lexington in 1937. At age 12, he heard Earl Scruggs on the radio and was inspired to take up the banjo. He loved rock ’n’ roll and blues sounds, but dreamed of playing with country stars.

Jimmy Martin heard Crowe playing on local radio when he passed through Lexington. He persuaded the teenagers’ parents to let him spend the summer vacation of 1954 performing in Martin’s Sunny Mountain Boys. Mac Wiseman took Crowe under his wing the following summer.

After high-school graduation in 1956, Crowe joined Martin’s troupe full time. This edition of the Sunny Mountain Boys achieved stardom on KWKH’s Louisiana Hayride and WWVA’s Wheeling Jamboree. It also recorded many of the Jimmy Martin classics released on Decca Records — “Oceans of Diamonds,” “Sophronie,” “Rock Hearts” and the like.

Crowe left the group in 1961, returned to Lexington and formed his own Kentucky Mountain Boys. This band included Doyle Lawson, Bobby Slone, Larry Rice and Red Allen and recorded the 1969 album Bluegrass Holiday.

Larry’s brother Tony Rice joined on guitar and the group was renamed The New South in 1972. This band was innovative, because Crowe incorporated folk, pop and country elements into its bluegrass sound. Ricky Skaggs, Jerry Douglas and Tony Rice were all in The New South when it recorded the legendary Rounder Records LP J.D. Crowe & The New South in 1975

Crowe’s driving rhythms, tasteful licks and flawless tone on banjo remained hallmarks of the band for more than 30 years. He was also a pitch-perfect baritone harmony vocalist. His years of training with Jimmy Martin made him a master of timing and a renowned mentor. Among those who passed through the New South were such bluegrass greats as Jimmy Gaudreau, Harley Allen, Tony King and future Diamond Rio member Gene Johnson.

Keith Whitley joined the group in 1978. Crowe reoriented the band’s style to a more hardcore country sound to accommodate Whitley’s masterful honky-tonk voice. Crowe showcased the young singer on the albums My Home Ain’t in the Hall of Fame (1979) and Somewhere Between (1982). Both albums included steel guitar, electric bass and drums to augment The New South’s bluegrass instrumentation.

While maintaining his own band’s progressive approach, J.D. Crowe joined the traditional bluegrass side project The Bluegrass Album Band alongside Lawson, Douglas, Rice, Vassar Clements, Bobby Hicks, Todd Phillips and Mark Schatz. This “supergroup” was mainly a recording ensemble, rather than a touring one. The Bluegrass Album Band issued six albums between 1980 and 1996. Meanwhile, Crowe continued to tour and record with The New South.

J.D. Crowe was named Banjo Player of the Year by the International Bluegrass Music Association (IBMA) in 1971, 1994 and 2004. He won a Grammy Award in 1983 for his instrumental “Fireball.”

Crowe was inducted into the Bluegrass Hall of Fame in 2003. The New South album Lefty’s Old Guitar won the IBMA’s Album of the Year award in 2007.

In recent years, J.D. Crowe had been suffering from COPD, chronic obstructive pulmonary disease. He was hospitalized last week, but was hoping to return home for Christmas.