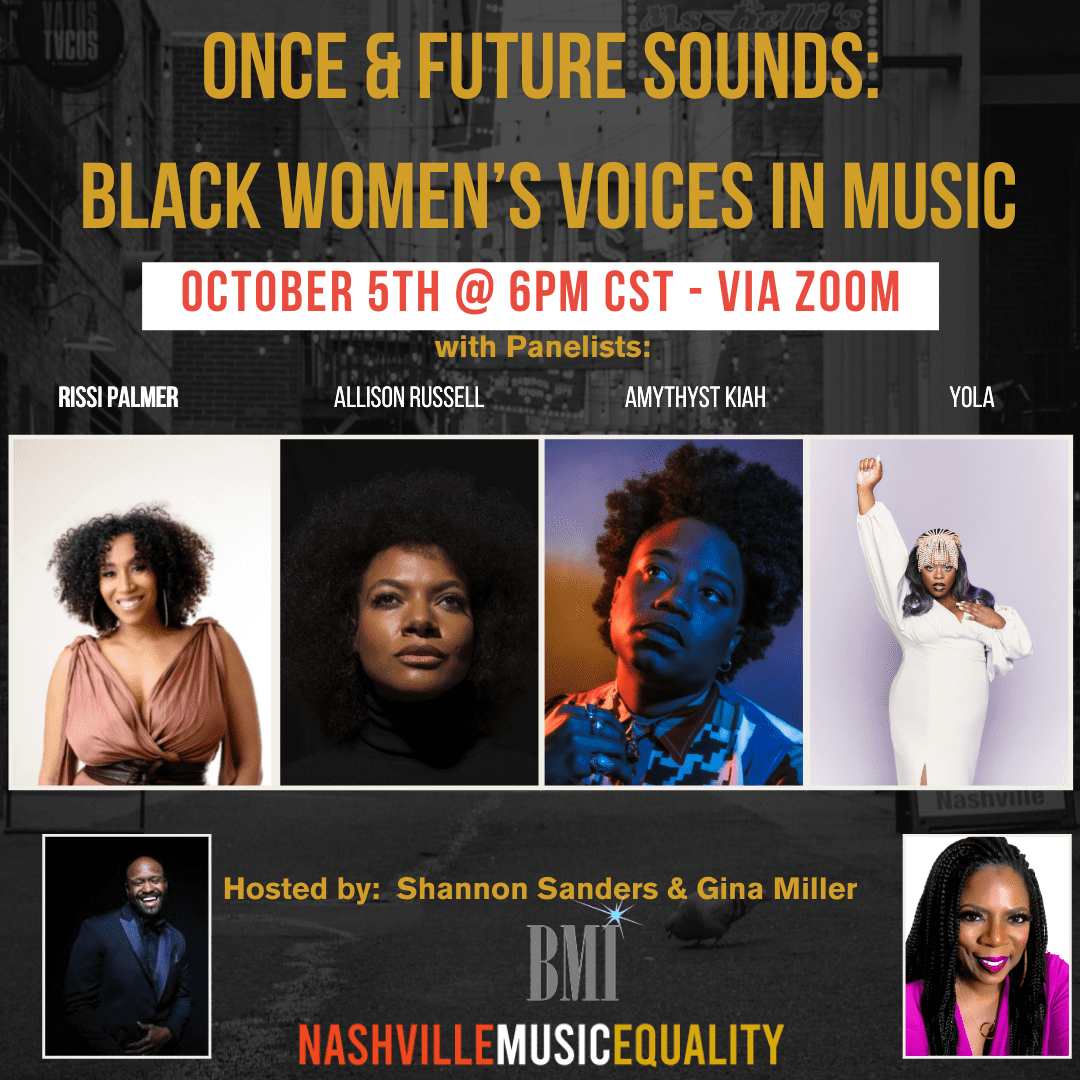 Nashville Music Equality will host “Once & Future Sounds Black Women’s Voices in Music” on Oct. 5 at 6 p.m. via Zoom.

The conversation will center around the journeys of these artists, how they overcome obstacles as Black women in music, where they see the genre growing in the future, the importance of storytelling in their music, where they find inspiration, and more. To register for the webinar, click here.

Palmer was offered her first publishing and label deal at the age of 19. In 2007, she released her debut album, Rissi Palmer, charting singles, “Country Girl,” “Hold On To Me,” and “No Air.” She launched her own radio show, Color Me Country with Rissi Palmer, on Apple Music Country. Since making its debut in August 2020, listeners have been treated to in-depth and necessary conversations with artists such as Brittney Spencer, Chapel Hart, Crystal Shawanda, Darius Rucker, Mickey Guyton, Miko Marks, The War and Treaty and many more. Palmer also created the Color Me Country Artist Grant Fund designed to support new country artists of color to build their music careers.

Russell recently released her first solo project, Outside Child. The poet, singer, songwriter, multi-instrumentalist, activist, and co-founder of Our Native Daughters and Birds of Chicago reflects on a tough childhood and a powerful statement of hope from a place of healing, of motherhood, and of partnership.

Kiah recently celebrated her Rounder Records debut with Wary + Strange. The Chattanooga-bred singer-songwriter is a member of Our Native Daughters—an all-women-of-color supergroup whose Kiah-penned standout “Black Myself” earned a Grammy nomination for Best American Roots Song and won Song of the Year at the Folk Alliance International Awards. Kiah interlaces political commentary and personal revelation in her music, offering an examination of grief, alienation, and the hard-won triumph of total self-acceptance.

Yola released her critically acclaimed debut album Walk Through Fire in February 2019. Nine months later, she achieved breakout success, landing four Grammy nominations including Best New Artist. Her new album Stand for Myself was released on July 30 and produced by Dan Auerbach. Yola has performed at both Newport Folk and Newport Jazz in the same year, and will also be joining select dates with Chris Stapleton on his rescheduled 2021 tour.