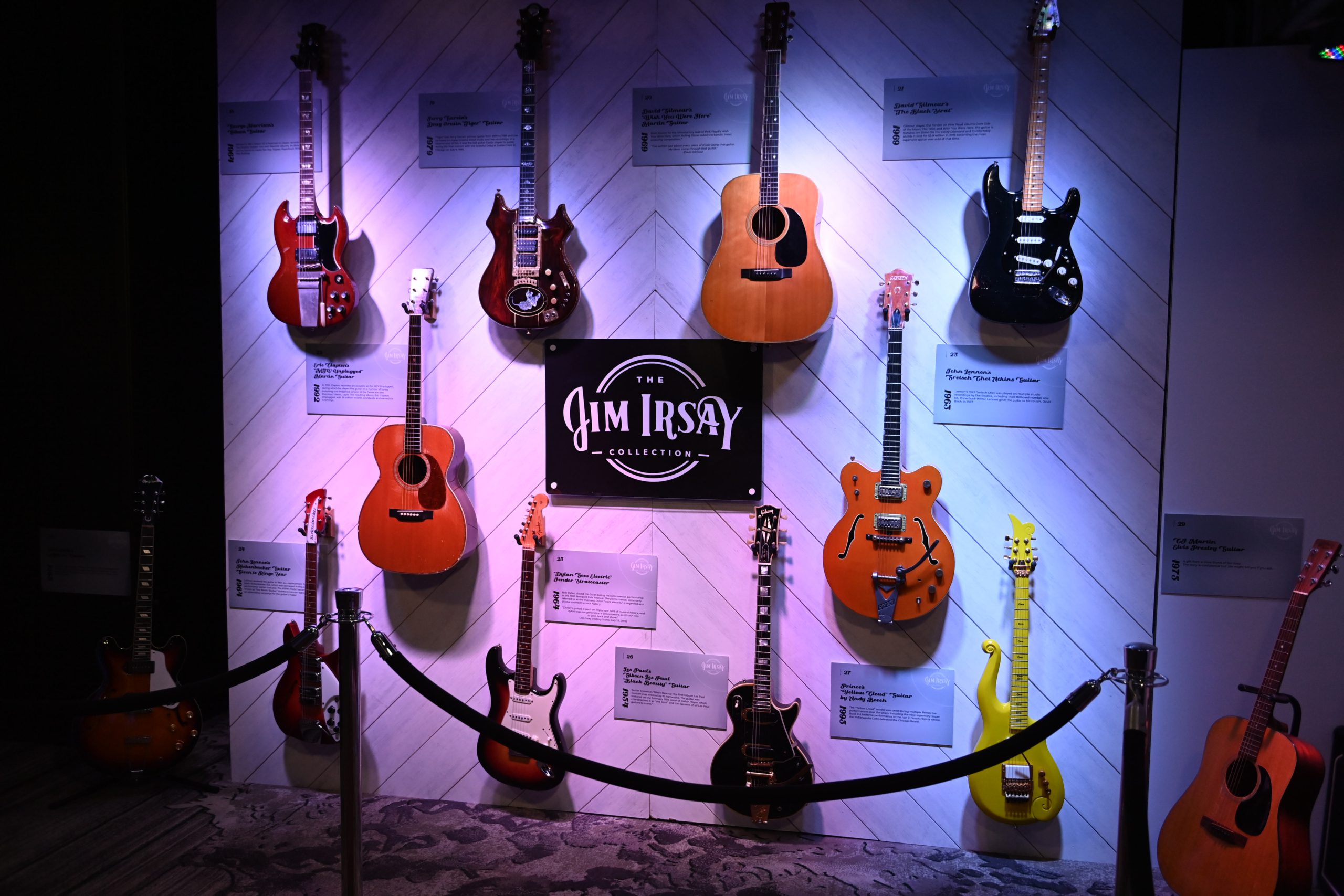 Photo: Courtesy of the Indianapolis Colts

This past weekend’s visit by the Indianapolis Colts is one I will remember always.

The occasion was an NFL game between the Titans and the Colts on Sunday (Sept. 26). But the communal celebration of sport was just part of the weekend memory bank.

On Saturday evening (Sept. 25), team owner Jim Irsay showcased highlights from his vast collection of American historical artifacts. The collection and the cocktail reception for it was at Loew’s Vanderbilt Hotel in a mezzanine suite.

First of all, proof of vaccination was required of every attendee.

Second of all, the displays were strikingly great. Lighting grids, video screens, roped-off large artifacts, a “guitar wall” and a mini-bandstand had transformed an ordinary business-convention space into a museum. It was extremely well done.

Third of all, the security was topnotch. Armed Metro cops hovered at the entrance/exit to the displays. That’s because the stuff in the Irsay collection is breathtakingly valuable.

We entered flanked by The Colts Cheerleaders, shaking pom-poms and flouncing in their blue-and-white outfits. Classic rock was piped in as a soundtrack.

The first thing I encountered was a large video screen showing a slow-crawl of a typed manuscript, uninterrupted by paragraph breaks. “Wait a second,” I thought, “This is On the Road by Jack Keruoac.” I turned around, and there it was: The actual 100-foot scroll on which the beatnik author famously wrote his classic. Wow. 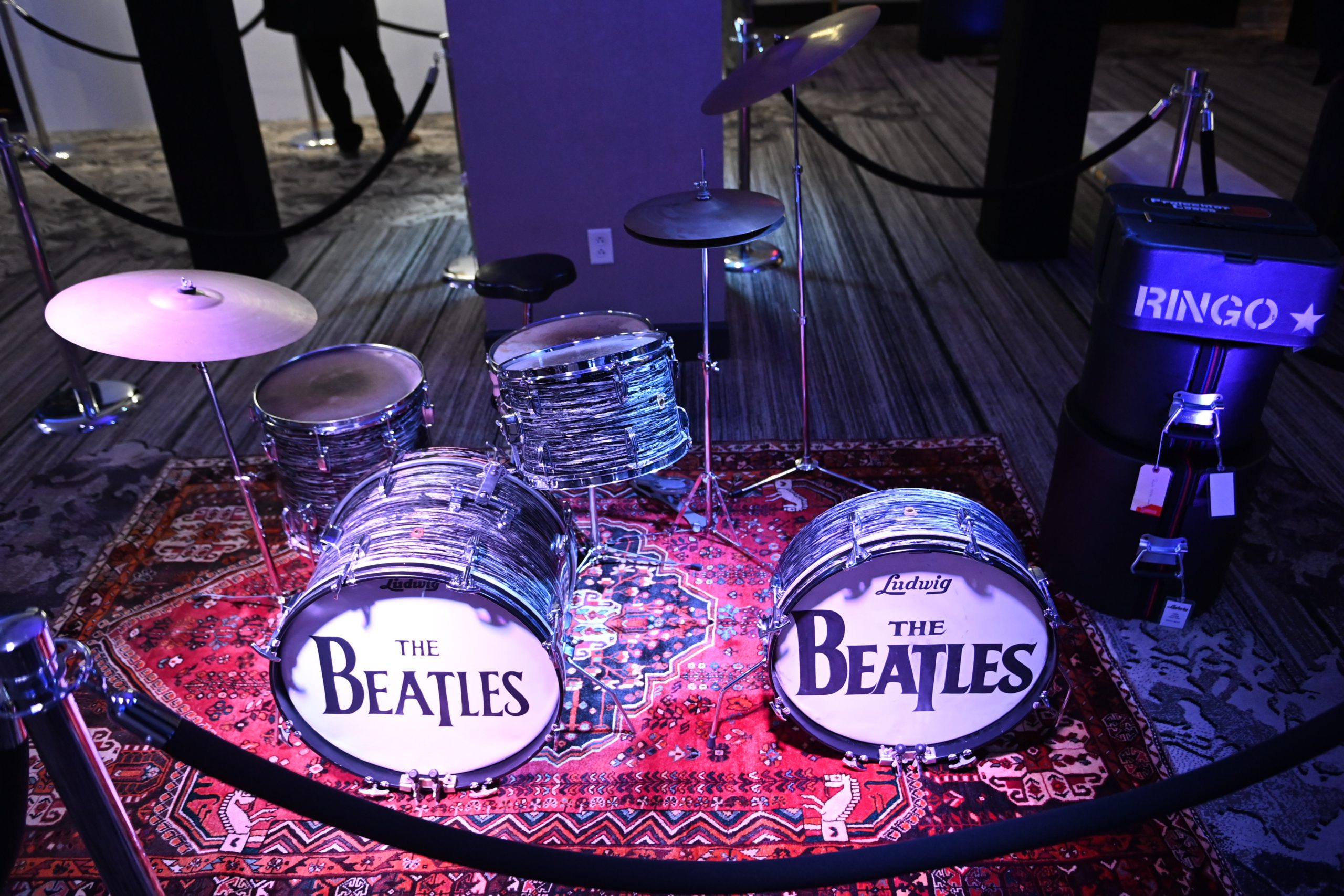 Photo: Courtesy of the Indianapolis Colts

Next up, a baseball bat autographed by the immortal Jackie Robison. Did you know that his number 42 has been retired by every professional sport, not just baseball?

My heart almost stopped beating when I gazed into the center of the room. There stood Ringo Starr’s drum kit, complete with the classic Beatles logo on the bass drum.

Just beyond it on a wall was an impossibly rare 1865 Wanted poster for John Wilkes Booth. Not to mention signed letters written by Abraham Lincoln, George Washington and Thomas Jefferson. OMG.

Ogling with dropped jaws was Ed Salamon, a fortuitous greeting, since I’d just finished reading his book Pittsburgh’s Golden Age of Radio. He was chatting with Brian Mansfield and John Lomax III.

Over at the Guitar Wall, we found, of course, Walter & Christy Carter of Nashville’s beloved Carter Vintage Guitars emporium, plus Joe & Linda Chambers of The Musicians Hall of Fame museum located in Municipal Auditorium. Super collectible instruments belonging to Eric Clapton, Prince, Les Paul and more were hanging there. Not to mention the iconic Sunburst Fender Stratocaster that Bob Dylan strapped on amid much controversy at the 1965 Newport Folk Festival.

Mingling were Charlie Monk, Dave Nichols, party organizer Zach Farnum, Becky & Michael Harris, Mayor John Cooper & Nashville first lady Laura Cooper, Colts VP Larry Hall and many attractively groomed sports folks and fashion models. Karen Brooks said she has moved across the street from attendee Carlene Carter and that Carlene is roping her into songwriting again. Back in the day, those two were the femme fatales of the Rock Block on Elliston Place, reigning from the bar at the Goldrush. 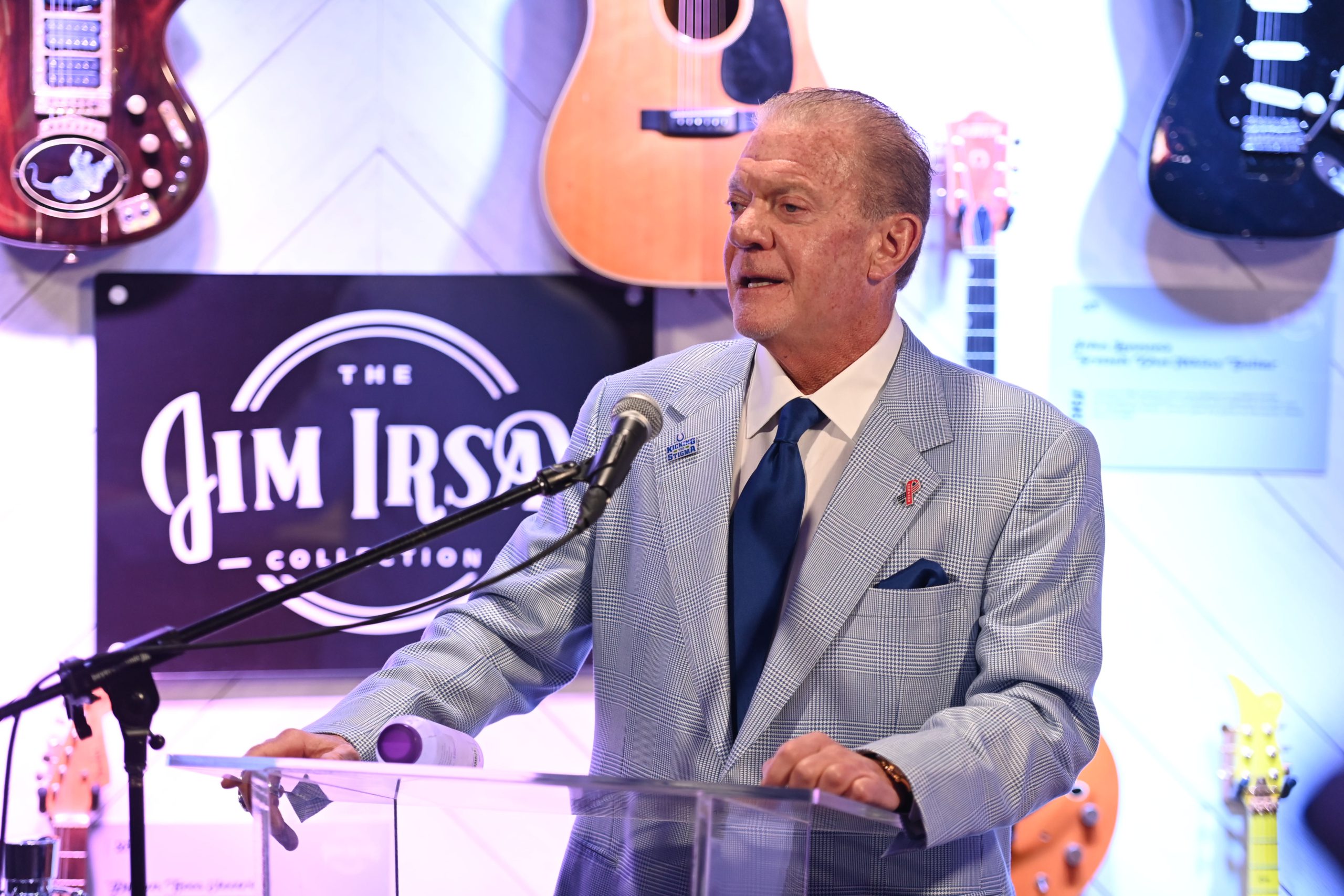 Producer Ray Kennedy said he has assembled The Pandemic Band, so named because its session-musician members are all fully vaxed and cloistered. This is important, because as you may or may not know, Kennedy prefers his recording sessions to be cut live.

The Jim Irsay Collection also includes items from Elton John, Jerry Garcia, Tiger Woods, Wayne Gretzky and Pink Floyd’s David Gilmour, not to mention the movie scripts for Monty Python & the Holy Grail and Jerry McGuire, autographed baseballs by Babe Ruth and Lou Gehrig, the shoes worn by Muhammad Ali when he boxed The Thrilla in Manilla, rare books and heaven-knows what else. Saturday’s exhibit was only a smattering of the collection’s artifacts. According to The Tennessean’s Mike Organ, Irsay is considering creating a museum for his treasures in Nashville.

“I began this collection to preserve, protect and share historic items with others in hopes of inspiring people to dream big and do great things in life,” said the mogul. “Since we’re in Music City, it makes sense to display instruments from some of the greatest musicians in history, as well as other special pieces that tell the stories of our shared past and culture.”

The Colts owner/CEO spoke fondly of several of his extraordinarily valuable artifacts, as well as his 50 seasons in the NFL. When he concluded, he tossed five NFL official footballs into the crowd. Attorney Pete Loesch caught one perfectly. The security-detail cops were eager to see it as Pete exited. If you wished, you could also leave with Colts ball caps or other free merch.

As for Sunday’s game, it was an injury-prone slugfest. Tennessee prevailed over Indianapolis 25-16. The Colts played a heroically brave game, fighting to the end. I hope Jim Isray left town proud.