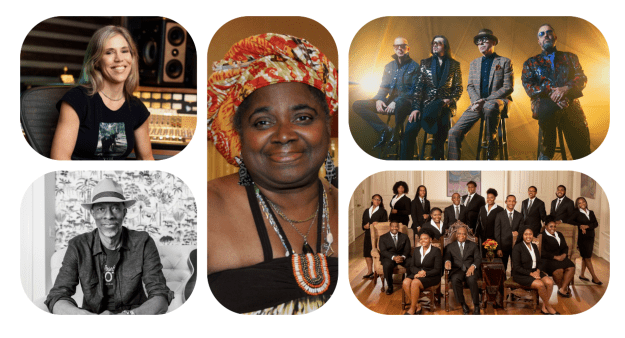 The Mavericks, Keb’ Mo’, Trina Shoemaker, Carla Thomas, and the Fisk Jubilee Singers are this year’s Americana Lifetime Achievement Award nominees. They are among the artists who will be recognized at the Americana Honors & Awards, on Sept. 22 at the Ryman Auditorium.

“We are beyond humbled to recognize this group of artists with our highest awards,” says Jed Hilly, Executive Director of the Americana Music Association. “All of these artists have transformed the way we listen and experience music and have helped to build a perennial foundation for Americana music to prosper as an art form today. Our community looks forward to welcoming them with open arms on our biggest night of the year in September.”

The 2021 Americana Trailblazer Award will be given to The Mavericks. Formed in Miami in 1989, the combo, led by singer/songwriter Raul Malo, has fused country with claves and string-band textures from Malo’s family heritage in Cuba. In 2000, the ensemble took a pause, but came roaring back in the 2010s with shows that surge with danceable rhythm, horns, bilingual singing and the dark twang of guitar player Eddie Perez. Malo and drummer Paul Deakin have been Mavericks since the beginning, and the talented current lineup released the band’s first-ever all-Spanish album in 2020.

Keb’ Mo’ will receive the Americana Lifetime Achievement Award for Performance. When guitarist and songwriter Kevin Moore launched his career as Keb’ Mo’ in the mid-1990s, he introduced legions of mainstream fans to the fingerstyle acoustic blues and brought new songs and a contemporary character to the legacy. A native of South Los Angeles, Moore came up as a blues and rock guitarist. His 1994 self-titled debut inspired Sony Music to revive the historic Okeh Records brand for his release. With five Grammy awards, he has been an in-demand collaborator, including his Grammy-winning 2017 duo album with Taj Mahal. Keb’s most recent album Oklahoma won the 2020 Grammy for Best Americana Album.

The Legacy of Americana Award will be presented to the Fisk Jubilee Singers in partnership with the National Museum of African American Music to shine a light on their extraordinary accomplishments and influence on American roots music. Originally formed as a nine-member group, they spread the refined and deeply emotional genre of the Negro spiritual through the U.S. and across Europe. As the Fisk Jubilee Singers settled into an ever-changing cast of students over the decades, they were invited to be part of key Nashville civic landmarks, including the inaugural broadcast of WSM radio in 1925. The choir was inducted into the Gospel Music Hall of Fame in 2000, and granted the National Medal of Arts in 2008.

The 2021 Americana Lifetime Achievement Award for Producer/Engineer will be presented to Trina Shoemaker who has become a vital contributor to roots and rock recordings by Sheryl Crow, Emmylou Harris, Brandi Carlile, Nanci Griffith and others. She chased her passion to become a record producer to Los Angeles and London, then on to New Orleans where she got noticed by producer Daniel Lanois who made her a tape op and then a full engineer. She worked on albums by Iggy Pop, Giant Sand, and Harris’s landmark Wrecking Ball, also tracking Crow’s self-titled smash and her Globe Sessions album, which garnered Shoemaker her first Grammy awards. Shoemaker has recorded, produced or mixed for Whiskeytown, Victoria Williams, Matthew Ryan, Shannon McNally, Andrew Duhon, Amy Ray, Josh Ritter and her husband Grayson Capps. She is the first woman to receive the Americana Producer/Engineer Lifetime Honor.

Carla Thomas will receive the Americana Inspiration Award. Thomas’s run of recordings for Stax and Atlantic Records through the 1960s made her the “Queen of Memphis Soul.” Thomas bridged soul, country and gospel as one of the key artists of a great musical and social movement. Inspired by singers like Jackie Wilson and Brenda Lee, Thomas joined WDIA’s Teen Town Singers at age 10. Her first record, a duet with her father, came out on the Satellite label. She appeared on American Bandstand and cut a full album of duets with Otis Redding in 1967. In later years, Thomas turned more of her energy to Artists In The Schools, a youth-focused non-profit. The Rhythm & Blues Foundation honored her in 1993 with its exclusive Pioneer Award. The Inspiration Award has been granted only once before, to Thomas’s Stax/Atlantic colleague Mavis Staples.

Tickets for the 20th Annual Americana Honors & Awards and 2021 Americanafest are available for purchase here.