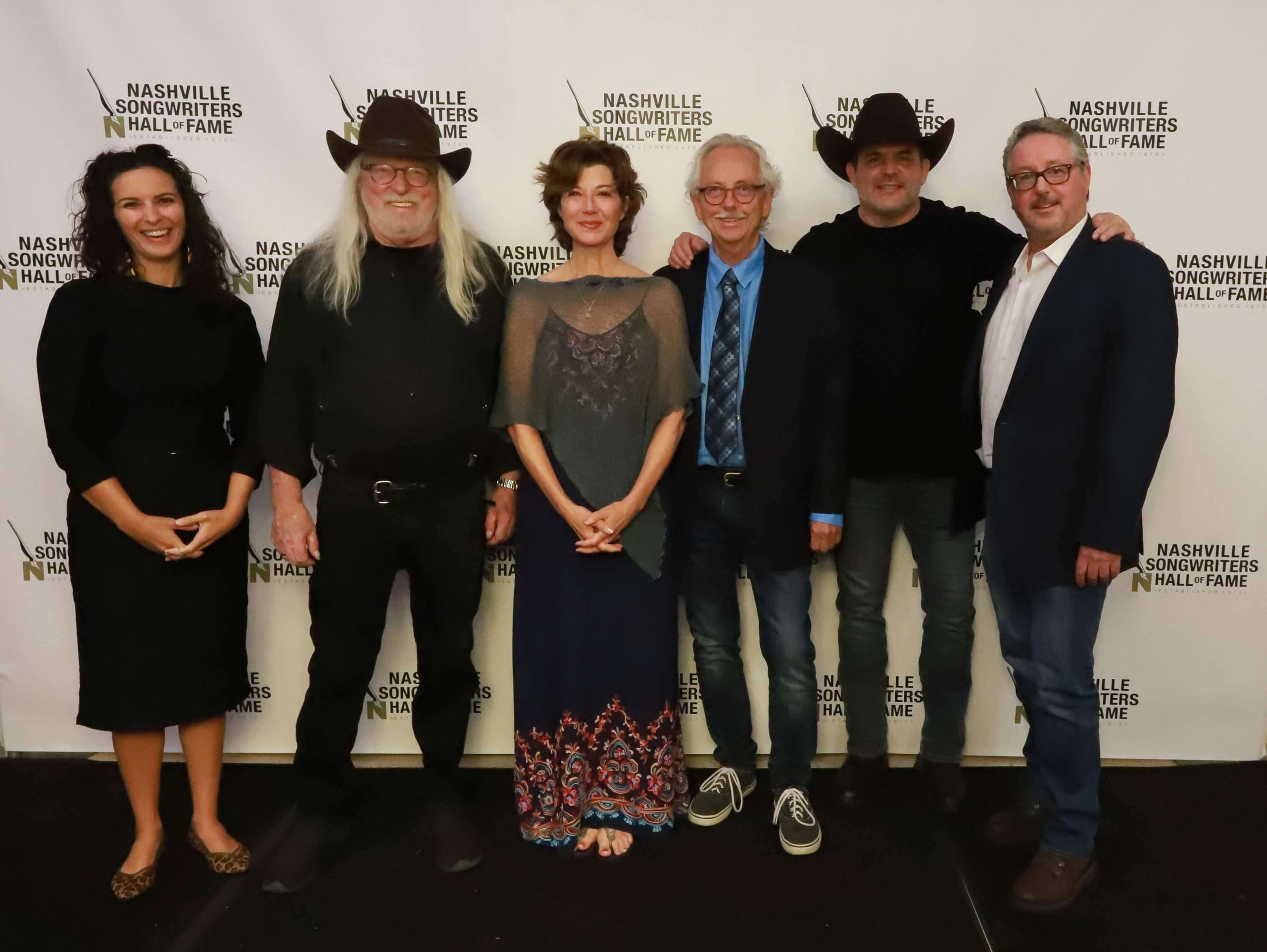 This year’s press conference announcing the newest members of the Nashville Songwriters Hall of Fame was a hybrid affair.

Participants could choose either to experience the event via streaming or attend in person. The option to show up live was limited to 40 people, to allow for COVID guidelines. Staged as usual at Columbia Studio A, the event was characterized by warmth and camaraderie.

We convened on Tuesday morning (July 13), and the fellowship was evident immediately. Everyone started to beam when they saw this year’s class of inductees posing for a group portrait. How could you not be delighted? Buddy Cannon, Amy Grant, John Scott Sherrill and Rhett Akins are all so abundantly worthy. Absent, but sending a video from the road was inductee Toby Keith.

“We’re honored to be in this historic space where so many of our [Hall of Fame] members recorded their most iconic songs,” commented NSHoF board chair Sarah Cates in welcoming the crowd. That would include prior inductees Tammy Wynette, Marty Robbins, Flatt & Scruggs, Johnny Cash, John Anderson, Rodney Crowell, Larry Gatlin, Rosanne Cash and Merle Haggard.

“It’s so good to be back together,” added NSHoF executive director Mark Ford. “We haven’t done this in a year and a half.”

“I’m overwhelmed that I am here,” said Rhett when he was invited to the podium. “When I saw the names on the ballot, I said to my wife, ‘I don’t have a shot.’ I take this very seriously. I want to keep the flame of country songwriting burning as long as I can.”

“I don’t really know what to say,” said an equally humbled Buddy. “I’m pretty much speechless. The first two songs of mine that were ever recorded were by Bob Luman, produced by Glenn Sutton right here in this room. I am so honored to be in this group of people.”

“To say this is an honor is to put it mildly,” said Scotty. “I have loved this town ever since I first landed here. In those first few days, I heard some songs that changed my world.”

“I’m so grateful to be in a town that celebrates creativity,” said Nashville native Amy. “I want to encourage everybody who’s ever had a creative thought: The world needs your stories.”

Commenting via video, Toby added, “This induction means everything to me. I’m looking forward to seeing you in November.”

The banquet and induction ceremonies will be held at the Music City Center on Nov. 1. It will be a double-sized event, since the 2021 gala will also salute the 2020 inductees—Steve Earle, Kent Blazy, Brett James, Spooner Oldham and Bobbie Gentry. They comprise the 50th anniversary class. The NaSHOF golden anniversary gala was postponed due to the pandemic, hence the double ceremony this year.

Following many happy reunions and hearty congratulations, we snacked on coffee and fresh-baked cookies. Surprisingly, neither Buddy Cannon nor John Scott Sherrill had ever been in the adjacent, super-historic founding building of Music Row, The Quonset Hut. Mike Porter happily offered guided tours to the songwriting veterans.