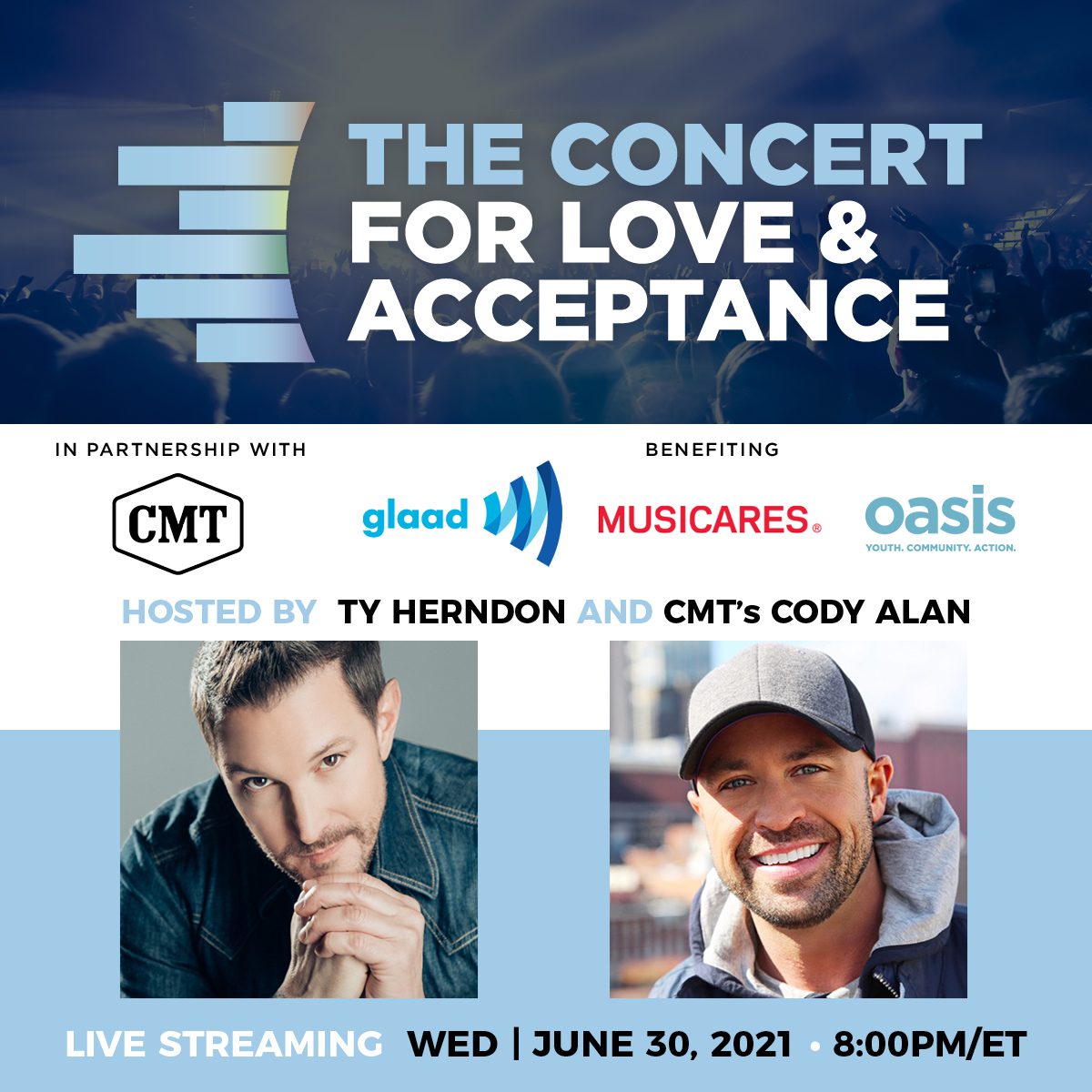 Country music artist and philanthropist Ty Herndon, in partnership with CMT, has announced that the 2021 Concert for Love and Acceptance will take place on Wednesday, June 30 at 7 p.m. CST and will be live-streamed exclusively on CMT’s Facebook and YouTube channels, and on the Foundation’s website.

Produced by Herndon’s charitable foundation, The Foundation for Love & Acceptance, the event will return as a star-studded online event, co-hosted by Herndon and CMT’s Cody Alan for the fifth consecutive year. GLAAD, MusiCares, and Nashville’s Oasis Center will also be the beneficiaries of the event proceeds.

“It’s a privilege to return as co-host of the annual Concert For Love & Acceptance, whose mission is as important today as when it launched six years ago. With dangerous and discriminatory legislation pending in our home state of Tennessee, the vocal support of the country music community is immeasurable in changing hearts and minds. I’m eager to again partner with Ty Herndon, CMT, GLAAD, and our new beneficiaries at MusiCares and Nashville’s Oasis Center to highlight the critical work to move LGBTQ+ rights forward,” says Alan.

GLAAD and Herndon created the first Concert for Love and Acceptance in 2015 shortly after Herndon became the first major male country artist to come out as gay. Herndon serves as executive producer of the 2021 Concert for Love & Acceptance, alongside returning executive producer Zeke Stokes, who has been in that role since the Concert began in 2015. Stokes is President of ZS STRATEGIES and a former Vice President of GLAAD.

“I’m thrilled to be partnering with the dynamic team at CMT once again to bring the Concert for Love & Acceptance to a broad audience as musicians, actors, comedians, and more demonstrate their support for LGBTQ youth and artists in the country music community and beyond,” shares Herndon. “This event comes from my heart, and I hope it continues to resonate with people all around the world as we spread a message of acceptance for all people and work toward a world where only love remains.”

For sponsorship opportunities, contact Shannon Shryne at [email protected] For more information and ongoing updates, as well as to RSVP for the live online event, visit the Foundation for Love and Acceptance at www.F4LA.org.