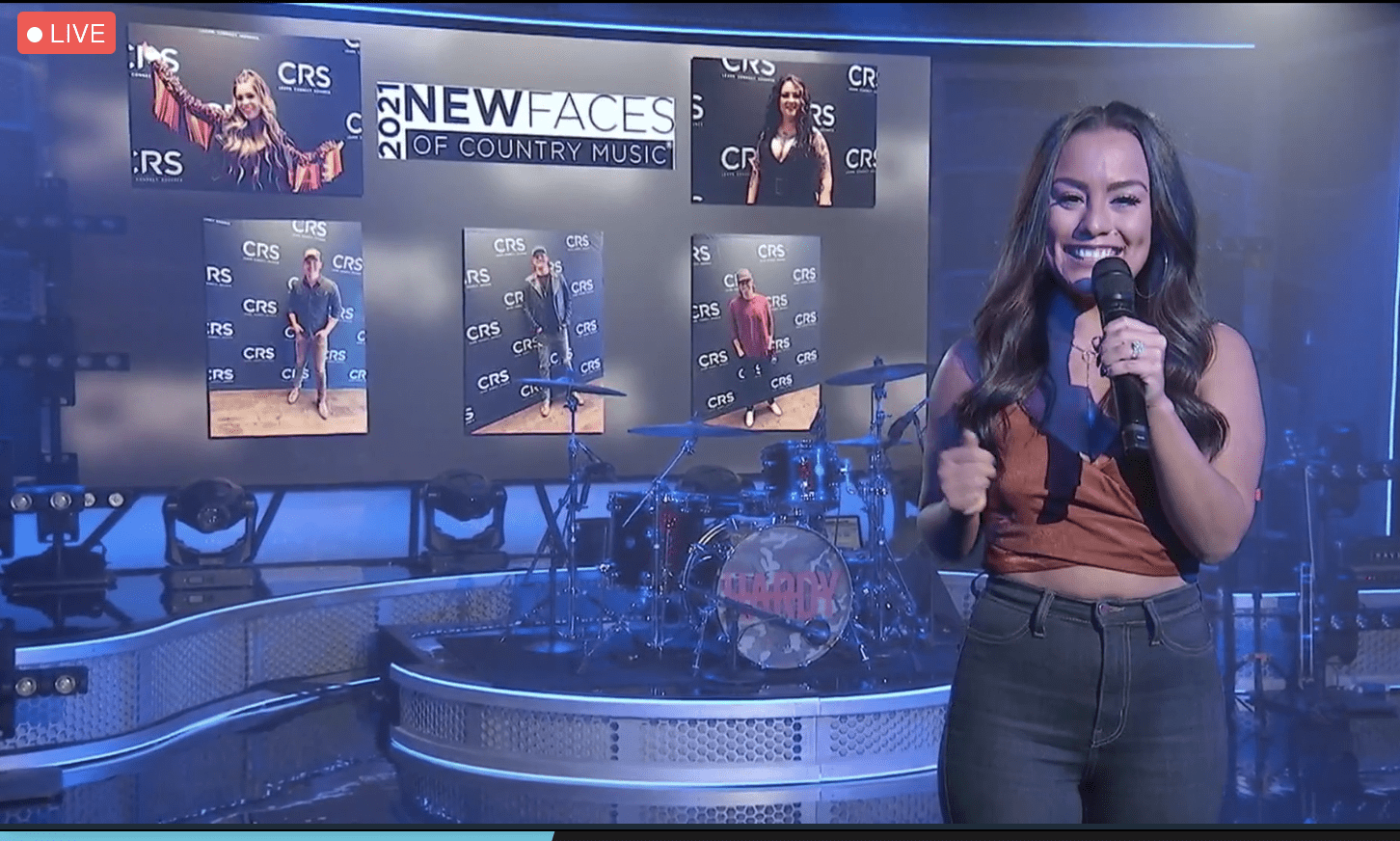 Five country up-and-comers took the stage on Friday (Feb. 19) to close out the four-day CRS 2021: The Virtual Experience.

Formed in 1970, the annual New Faces of Country Music Show is one of the most anticipated events at CRS, and has featured some of the format’s biggest acts in their early days. Each of the 2021 New Faces have had some traction at country radio, and were voted on by the industry to perform.

Westwood One’s Elaina Smith served as the host for the evening, sponsored by the Academy of Country Music and St. Jude Children’s Research Hospital.

First to perform was Big Loud Records artist HARDY. Both Smith and HARDY shook off the awkwardness of being in person for the first time in a while, before the singer-songwriter expressed how grateful he was to be chosen as a New Faces performer. “I’m honored that country radio has my back,” HARDY said. 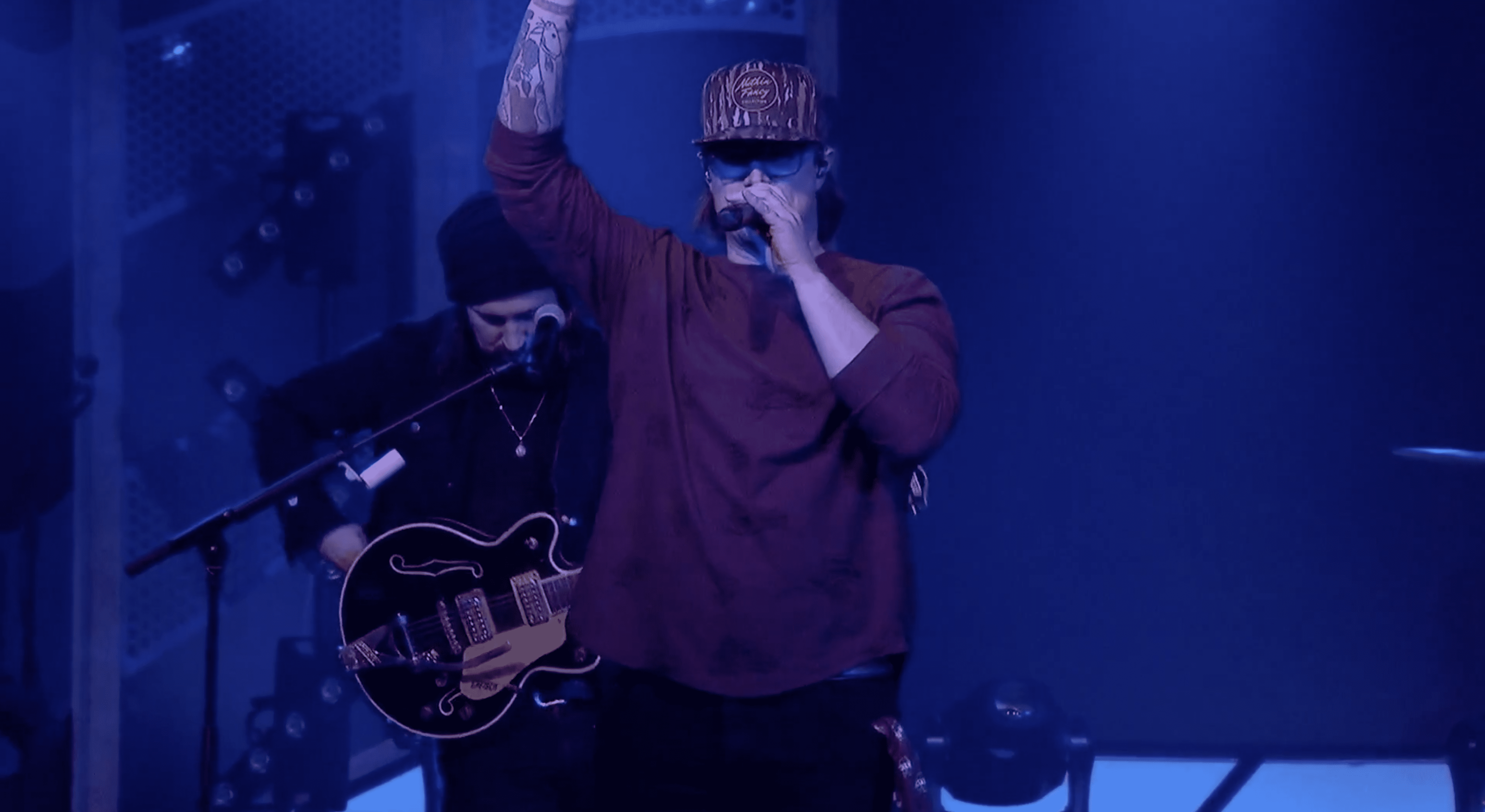 His rocking four-song set started off with a bang, as he played his rock ‘n roll influenced “Boots.”

Next up was HARDY’s collaboration with Lauren Alaina and Devin Dawson that rose to the pinnacle of the country charts, a place he had been before as a songwriter, but his first time as an artist. “This was my first No. 1 as a country music artist, and that’s because of you guys,” HARDY said before launching into his Platinum-certified “One Beer.”

The country rocker continued on with his next official single at country radio, “Give Heaven Some Hell.” Penned by HARDY with Ashley Gorley, Ben Johnson, and Hunter Phelps, the song is an emotional tribute to a lost friend. A white church steeple displayed on the video screen in the background as HARDY sang: “Hide your beer, hide your clear from the man upstairs, Crank it loud, hold it down ’til I get there / And when I do I hope you got some new stories to tell, ‘Til then, give heaven some hell.”

Next up was RECORDS Nashville/Arista Nashville artist Matt Stell. His set started out with an introduction video of him on a date that is not going well, until the woman in his passenger seat hears his song on the radio, that is. 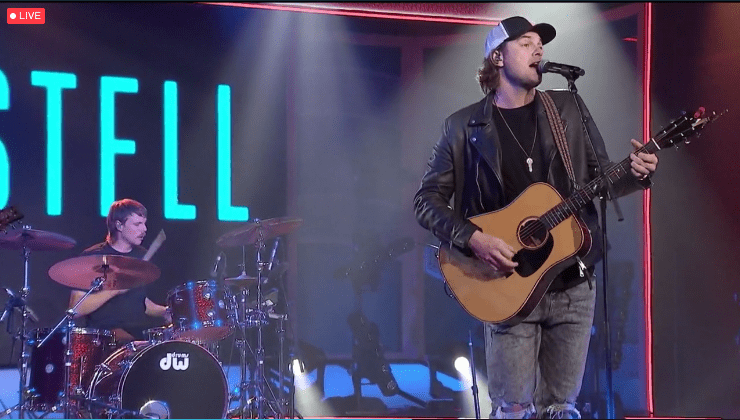 The singer-songwriter started the music with his next country radio single, “That Ain’t Me No More.” Stell surprised fans with the uptempo heartbreaker earlier in February.

The 6’7″ Stell commanded the stage, next performing his latest No. 1 “Everywhere But On.” His voice shined on the Gold-certified track. Stell then transitioned to his first No. 1, the Platinum-certified track “Prayed For You.”

Another video moment featured the Arkansas native writing a letter to his mother, which she read on camera. Stell expressed his gratitude for her and her support, and let her know he had paid off her horse trailer. “Thank you country radio,” an emotional Stell said as the video ended.

19th & Grand Records artist Tenille Arts was up next.

A fringed-jacket clad Arts started off her set with a fun small-town romp, “Everybody Knows Everybody.” Notably during Arts set, viewers were able see a Zoom grid of spectators in front of Arts.

Arts did a shot with the viewers to feel a little closer given the circumstances, and to promote her new song “Give It To Me Straight,” which she released on Friday. 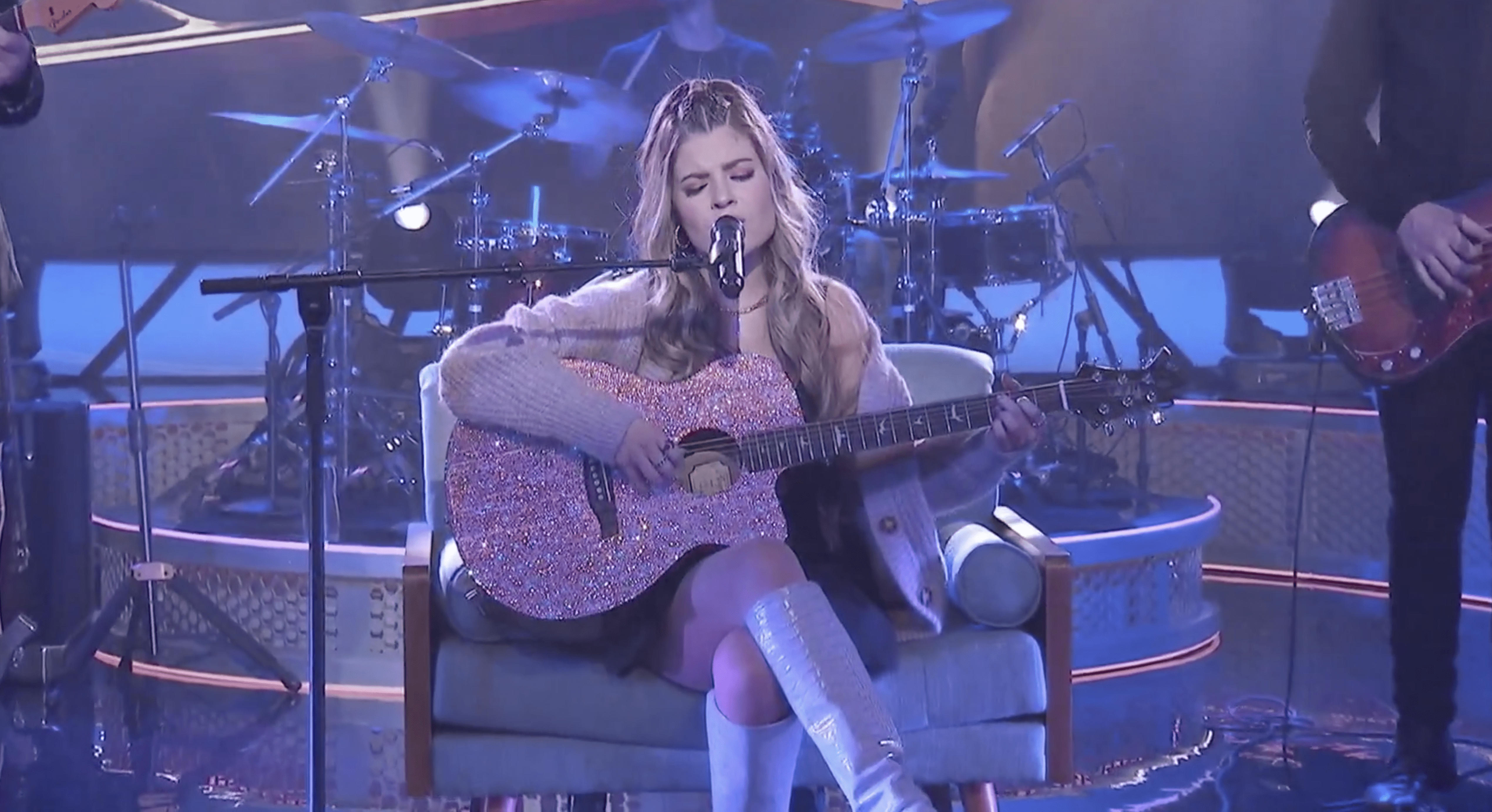 The singer-songwriter sat down in a chair and got comfortable for the next song, a story of her journey to Nashville. “I was so hopeful but so terrified at the same time,” Arts said. Her gorgeous voice sparkled on a new song she wrote about her one bedroom apartment that she chased her dreams in, “a song kind of like a letter to the next dreamer that moves in.”

The Canada native closed her set with her breakout hit, “Somebody Like That,” with an infectious smile on her face.

Mercury Nashville Recording artist Travis Denning hit the stage next, after a hilarious introduction video where he compared having a hit at country radio to fishing. “I found a lot of parallels in trying to have a big hit at country radio and tryin to catch a big fish,” Denning said as he broke down his fishing struggles.

Denning began with a new country burner that had him singing about his country lifestyle. “Call it what you want, we just call it country,” the charismatic artist sang. 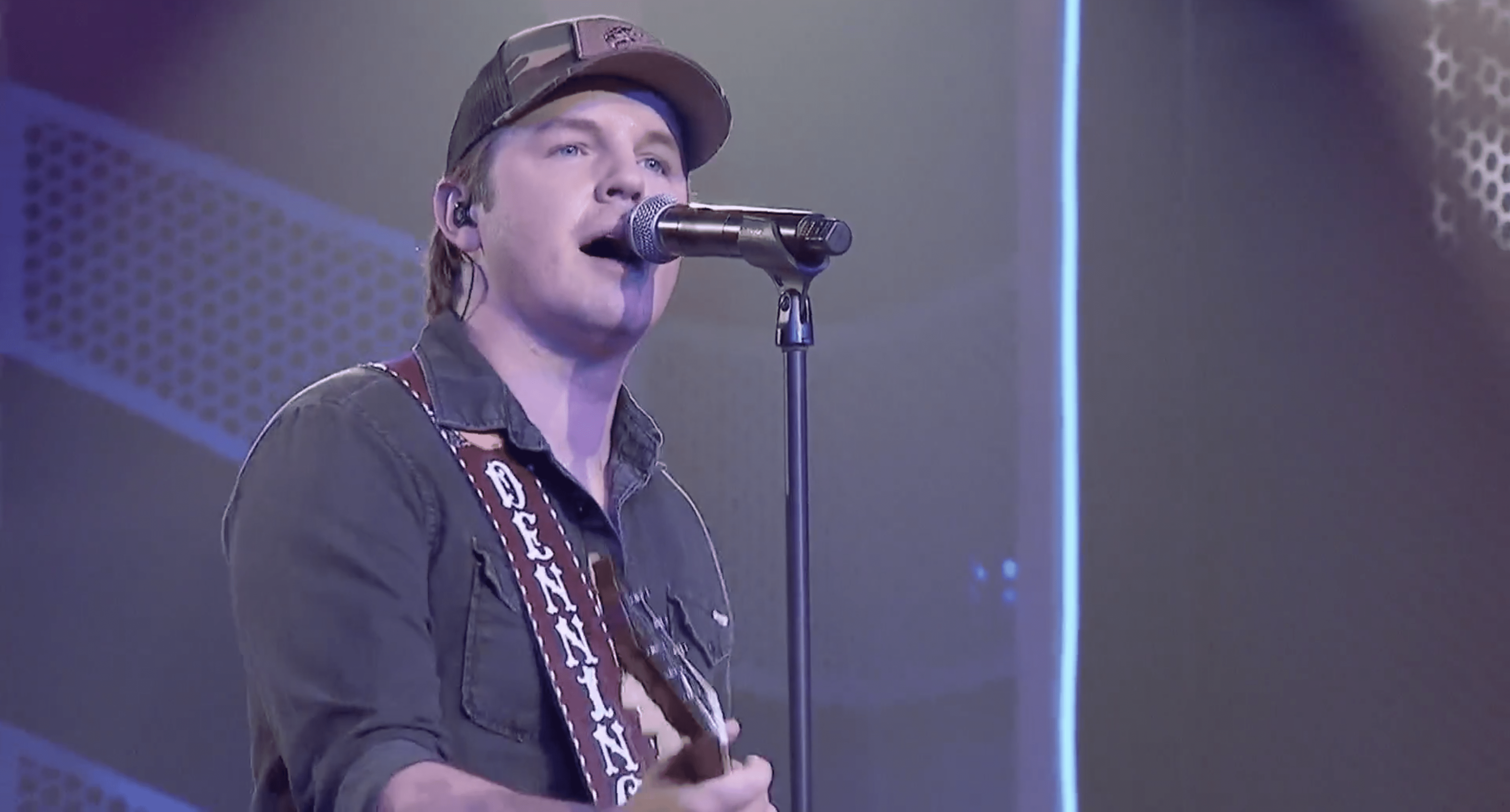 “This is an absolute honor to be here,” the Georgia native said before playing a new song titled “I’m Gonna Love You,” with a piano accompaniment.

The talented musician closed with his first No. 1, “After A Few,” that ended with an awesome guitar solo.

“It’s a huge thing for my name to be next to Miranda and Eric,” McBryde said as she started her set.

The Grammy-nominee opened acoustically with a chill-invoking “Girl Goin Nowhere.” Although attendees were watching through screens, it felt as if McBryde was reaching out personally to each person watching. 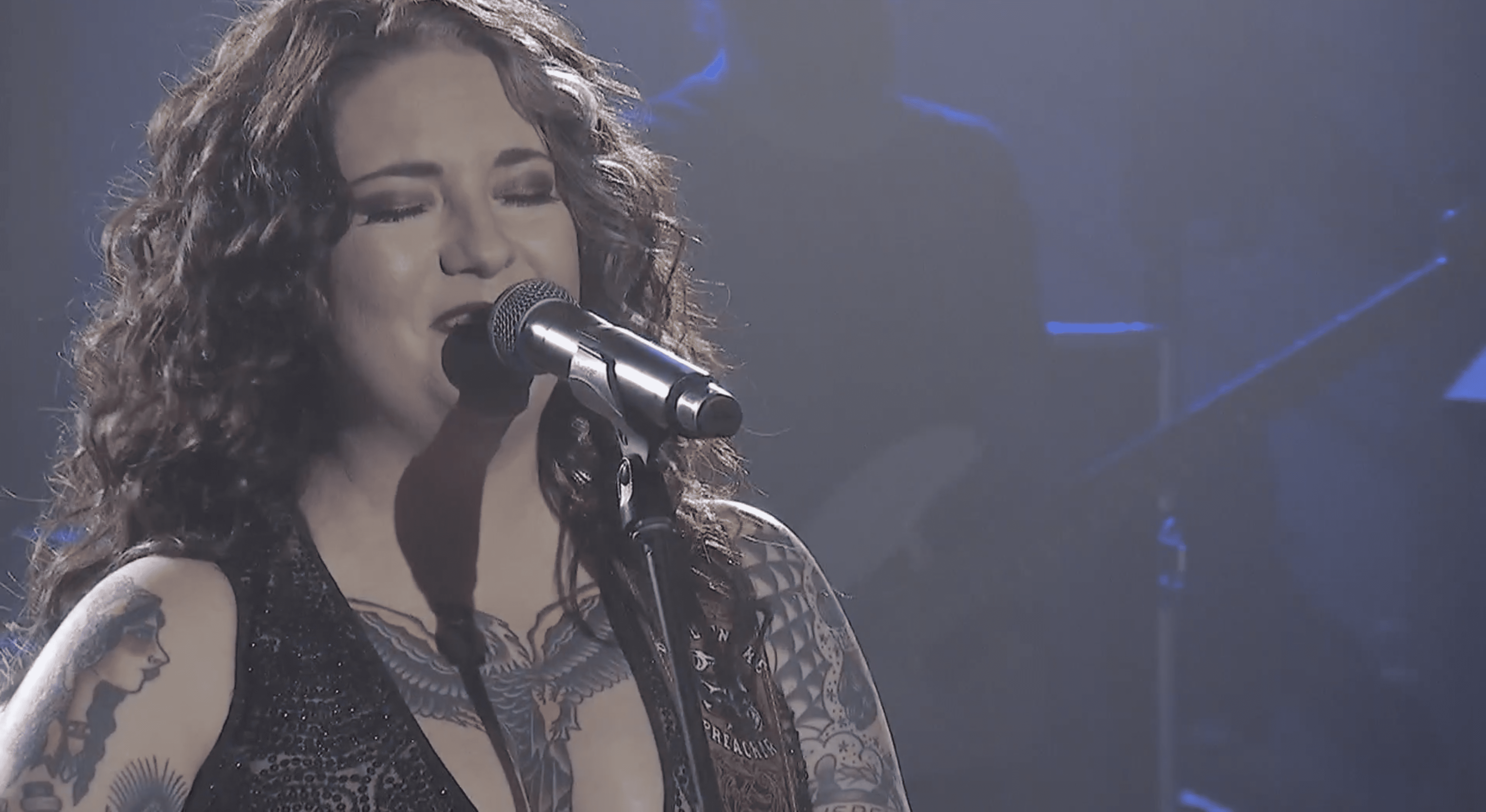 She then played her breakout Gold-certified single, “A Little Dive Bar In Dahlonega,” with emotion in her eyes.

The singer-songwriter had a little fun covering Johnny Cash’s “I’ve Been Everywhere.” She put her own spin on the song by changing the second verse to include all the different beers brands she likes.

McBryde’s award-winning, Gold-certified single “One Night Standards” was up next. The song appears on the Arkansas native’s Grammy nominated album Never Will, as well as the song McBryde closed with, “Martha Divine.”

The rocking murder song will appear on her recently announced six-song EP Never Will: Live From A Distance. The masterful communicator proved that she can successfully deliver any and all subject matter with a full range of captivating performances in her star-making CRS New Faces set.