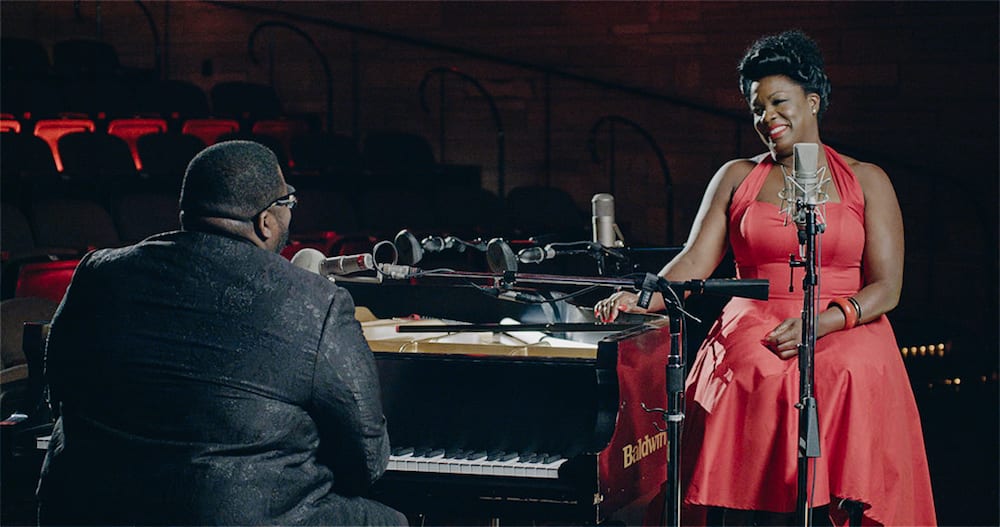 The War and Treaty. Photo: Courtesy of the Country Music Hall of Fame

It’s high time we paid heed to the outstanding music that continues to be made by the Americana community.

Towering above them all is The War and Treaty, who has the unchallenged Disc of the Day.

DULCIE TAYLOR / “Easy for You”
Writers: Dulcie Taylor/George Nauful; Publisher: Raven in the Window, ASCAP; Producer: George Nauful; Label: Mesa Bluemoon (track); dulcietaylor.com
– This critically acclaimed California troubadour has culled favorites from her seven prior CDs to create Reimagined. The collection remixes, re-records and re-imagines the tunes, starting with this sweet/sad, lilting country rocker. As always, her delivery shimmers like a multi-faceted gemstone.

DIANNE DAVIDSON / “True Believer”
Writers: Dianne Davidson; Publisher: Perigon/Jamb Kitchen, BMI/ASCAP; Producer: Dianne Davidson & Larry Chaney; Label: HWCD (track) / www.diannedavidson.com
– Native Tennessean Davidson was a prodigy who recorded her breakthrough albums while still a teen (Baby in 1971, Backwoods Woman in 1972 and Mountain Mama in 1973). She became a vocalist in Linda Ronstadt’s band and also backed such names as Leon Russell, B.B. King, Jimmy Buffett and Tammy Wynette. She left the music business to become a businesswoman and mom. Perigon: Full Circle is her first new album in more than three decades. Although she covers Bob Dylan (”To Make You Feel My Love”) and Gretchen Peters (”Over Africa”), the collection is dominated by her originals. They prove that her songwriting gift is undimmed. One of many highlights is this soulful, spellbinding outing with flecks of jazz, pop and blues in her delivery. Haunting stuff, as is the whole thang.

THE WAR AND TREATY / “Five More Minutes”
Writers: Michael Trotter Jr.; Publisher: Downtown DLG/Downtown DMP, ASCAP/BMI; Producer: Michael Trotter Jr.; Label: Rounder (track)
– Michael and Tanya Trotter, who perform and record as The War and Treaty, are among Nashville’s finest new gifts to the world. The new CD is titled Hearts Town, and I urge you to buy it. Trust me, you need these two people in your life. This super melodic, old-school soul/pop rouser will lift you out of your chair. If the blasting, brassy horn blasts don’t grab you, the power of their awesome voices will. “Five More Minutes” also has a charming music video. The whole record inspires my deepest heart and soul. Check out the soaring, throbbing “Yearning” or the stately, exquisitely harmonized “Take Me In” for further evidence.

THOMM JUTZ / “The Flood of 2010”
Writers: Thomm Jutz/Jon Weissberger/Charley Stefl; Publisher: Asheville Forest/Thomm Songs/Asheville Music/Use Your Words/Maddy Dog, SESAC/BMI; Producer: Thomm Jutz; Label: Mountain Home (track)
– Jutz picked up a bluegrass Grammy nomination this year. His current project is a two-volume opus titled To Live in Two Worlds. The second volume leads off with this vivid story song about the Nashville flood. If you lived through it, you’ll recognize all the little details in the lyric. If you didn’t, he’ll sing you a newsreel. Jutz is an able if unspectacular vocalist, but his guitar work is stunning, as is the rest of the star-studded backing band. Just as impressive is his mastery of folk and old-time country songwriting.

CIDNY BULLENS / “The Gender Line”
Writers: Cidny Bullens; Publisher: Red Dragonfly, BMI; Producer: Ray Kennedy & Cidny Bullens; Label: Blue Lobster (track)
– In this pop/rock ballad, Bullens sings in a sandpapery, folkish fashion about his unique journey while Rodney Crowell offers soft vocal support. “Are you a boy or are you a girl?” he asks as the song draws to a close. You see, this is from Walkin’ Through This World, which is his ninth album, but his first as a transgender man. I was a fan of rocker Cindy Bullens, and this collection sounds like the work of an equally talented fellow. Other guests on the CD include Beth Nielson Chapman, Bill Lloyd and Mary Gauthier. “The Gender Line” is also the title of a movie about this artist by Nashville filmmaker T.J. Parsell which won Best Documentary Short at the Edmonton International Film Festival.

SUZZY ROCHE & LUCY WAINWRIGHT ROCHE / “I Can Still Hear You”
Writers: Lucy Wainwright Roche; Publisher: none listed; Producer: Jordan Hamlin; Label: StorySound (track)
– Suzzy Roche and her recording-artist daughter traveled from New York to Music City to craft their album I Can Still Hear You. The sessions were aborted when the pandemic hit, but everyone persevered from their homes. The record’s title tune begins in an intimate, wistful soprano tone, then builds gentle layers of acoustic strumming and the unusual, lovely harmonies that this quirky, gifted family has always been so good with. The original Roches trio ended with the death of Suzzy’s sister Maggie in 2017, but one of her songs is on the collection, as is the traditional Irish tune “Factory Girl.” In every family configuration, I love these folks.

WAYLON PAYNE / “All the Trouble”
Writers: Waylon Payne/Adam Wright/Lee Ann Womack; Publisher: none listed; Producer: Frank Liddell & Eric Masse; Label: Carnival (track)
– The full album title is Blue Eyes, the Harlot, the Queer, the Pusher & Me. It chronicles Payne’s harrowing journey through drug addiction and recovery, while touching on his status as a gay country-music man. It’s definitely an album to explore. Lee Ann Womack’s recording of this song earned a 2019 Grammy nomination as Best American Roots Song. Payne’s version is lighter and more intimate, with his earnest vocal and deft guitar work up in the mix. He’s not only a superb songwriter, he’s a potent, expressive singer, too.

RUTHIE FOSTER / “Ring of Fire”
Writers: J. Carter Cash; Publisher: none listed; Producer: Denby Auble; Label: Blue Corn Music (track)
– Foster has been a presence in folk, gospel and blues circles for 25 years. Her current collection is in a new mode: The Ruthie Foster Big Band. Recorded live, this ensemble has brought her a 2020 Grammy nomination. Believe me, you’ve never heard “Ring of Fire” in quite this way. The Johnny Cash classic becomes a Memphis soul ballad with horns and guitars adding slow, steamy textures beneath her languid, jazzy delivery. The album’s songwriting credit should have included the name of the song’s co-writer, Merle Kilgore.