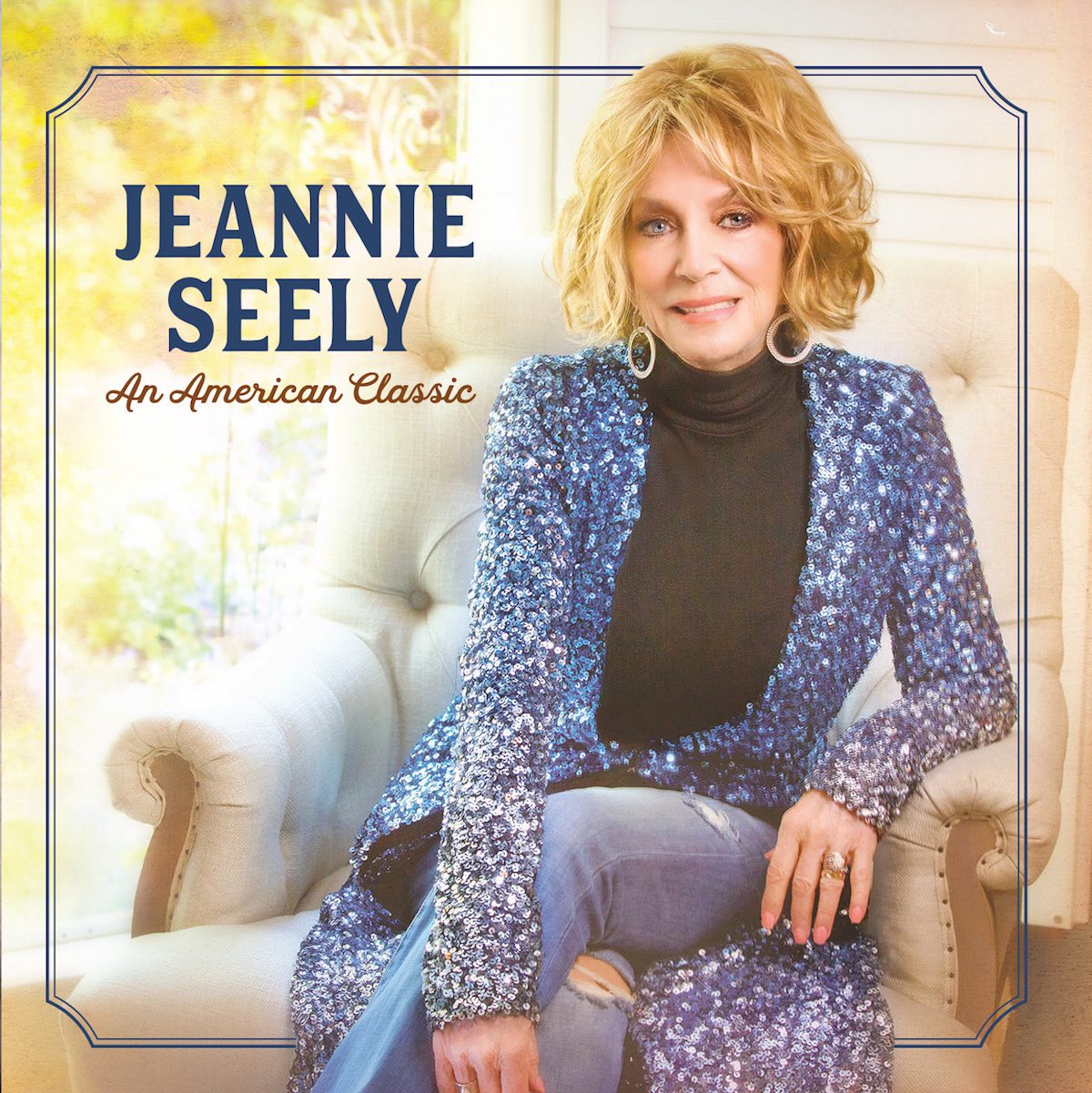 For nearly six decades, Jeannie Seely has blazed a trail as a songwriter, artist, and outspoken advocate for female artists. Along the way, she’s forged friendships with her fellow country music elites and inspired generations of female artists who pursue their careers on their own terms.

At 80, she is still as passionate as ever about good friends and good music. She offers both on her new album, An American Classic, out Friday (Aug. 14) via Curb Records.

The project is a collection of collaborations with an array of friends Seely has made over the course of her career, and features duets with Willie Nelson, Rhonda Vincent, The Whites, Steve Wariner, Vince Gill, and Lorrie Morgan, as well as a tribute to her longtime friend, the late Dottie West. She also revisits some of her classics, such as her signature song “Don’t Touch Me” and her 1974 Top 10 hit, “Can I Sleep In Your Arms.” She also collaborates with Ray Stevens on “Dance Tonight,” which was penned by Sir Paul McCartney.

Author, teacher, historian, songwriter, producer and executive Don Cusic reached out to Seely with the idea for the collaborative project.

“He’s such an incredible historian, that I was absolutely thrilled,” Seely says. “ I learned so much and he is fun to be around, so I enjoy his friendship.”

Many of the artists included on the album are connected through Seely’s work from more than five decades as a member of the Grand Ole Opry. Bill Anderson joins Seely on “When Two Worlds Collide,” which Anderson co-wrote with Roger Miller and Miller originally released in 1961.

“Bill and I do so many concerts on the road from the Country Family Reunion shows, so to add another dimension to the shows out there, we started doing a duet on this song. I have always loved this song, and my probably top 10 favorite songs of all time. And so I was delighted to have Bill do it. He’s truly one of my best friends.”

Vincent, whom Seely invited to be the newest member of the Grand Ole Opry earlier this year, joins her on “All Through Crying Over You,” and recently earned a No. 1 bluegrass record with “Like I Could,” which Seely co-wrote.

Seely has long been one of the Grand Ole Opry’s biggest champions—and, at times, its conscience. She was inducted as an Opry member in 1967, barely a year after earning a Grammy for “Don’t Touch Me.” Seely was the third artist to win a Grammy in that category.

Seely was also the first woman to host one of the Opry’s 30-minute segments, in January 1985—though she says that first hosting gig came about by necessity rather than by design.

“There was an ice storm and I was the only Opry artist in the building that evening,” she recalls. “I opened the show, and because there weren’t many other artists there, I featured my steel guitar player Tommy Hannum. After that, every manager that came in, I would make an appointment with them to discuss the fact that women simply were not allowed to host the Opry. To me, they were ignoring 50 percent of the audience and 50 percent of the talent pool and Opry cast. Every time, they would say, ‘Well, that’s the tradition here.’

“And I would point out that it sure looked and smelled like discrimination to me,” she states.

Undeterred, Seely kept asking, and when issued a proper invitation to host one of the Opry’s 30-minute segments, she made the most of it. “I did my homework every week,” she recalls. “I was aware that if I didn’t do that, that door would be closed, not only to me, but all the other young women coming up. It’s such a rewarding thing to me when Lorrie Morgan and Pam Tillis and that generation came in, and they could walk out there, and do a great job without ever having to be even concerned with that. It was just simply the right thing to do.”

An American Classic also includes a duet with Willie Nelson, whom Seely first met in 1963 in Los Angeles, where Nelson was recording for Liberty Records and Seely was working as a receptionist.

The work at Liberty sparked an enduring friendship, with Seely and Nelson including each other’s songs on their projects, touring together, and even collaborating on a duet, “You’ve Been Leaving Me For Years,” on the ‘90s album All-American Cowboys. Even then, Seely was fighting for equal recognition as a female country artist, both for herself and for her peers.

“I wish they would re-issue that album. And I wish when they repackage it, they’d put my picture on it,” she says. “There again, as a female, these are battles we’ve always had to fight. And we’re still fighting them. It’s just ridiculous. When that album came out, I called them and asked, ‘Why did you not put my picture on there?’ And they said, ‘Well, because it was called All-American Cowboys.’ And I’m like, ‘So maybe you named the album wrong.’ As a kid, I played cowboys and indians, and nobody ever told me I couldn’t because I was a girl.”

For An American Classic, Seely invited Nelson to sing on Dallas Wayne’s “Not a Dry Eye in the House.” Nelson recorded the song in Austin and sent in his vocal track.

“First of all, what a great song, what a clever idea to write it from a theatrical standpoint. When Dallas first heard it, he said, ‘Seely, I love the reading you all did because it sounds like an intimate conversation between two old friends.’ I thought that was perfect. I didn’t even ask Willie about playing guitar, so when I got the track back and that guitar comes in, him playing Trigger, it just sounded so good. That was just an added thrill.”

“He’s been a wonderful friend to me,” she adds. “Years ago, he gave me a little hands-up with the opening for him on fair dates. And after the Nashville flooded 10 years ago, when I lost my home, one of the very first checks I got in the mail was from Willie Nelson to help me out. He’s just a wonderful man. He does so much to help so many people that nobody even knows about.”

She also honors her late friend, fellow Opry member and country music trailblazer Dottie West—who was the first female country artist to ever win a Grammy.
On “If You Could Call It That,” songwriters Bobby Tomberlin and Steve Wariner incorporated unfinished song ideas that Seely’s late friend Dottie West kept in a notebook. West died in a car wreck in 1991 while on her way to perform at the Opry.

Seely recalls that when people would ask West how she was doing, West would often say, “I just go on living, if you can call it that.”

“I was thrilled to get the song and I can tell you, honestly, I would have been absolutely destroyed if they would have given this song to anybody else. I felt like Dottie was right there, a part of it. I try, normally, to never phrase or sing a line like somebody else, but in this instance I could hear and feel her so strongly that I really channeled her on a couple of lines on it.”

West and Seely first met at the Palomino Club in Los Angeles. “I told her I was a fan and had been following her career since she was on the Landmark Jamboree in Cleveland. She just looked at me and she said, ‘I don’t even know the last time I talked to anybody that remembered that show.’ So we just kind of clicked from the very beginning. She encouraged me to move to Nashville and introduced me around. She was such a great friend. We called each other ‘Three O’Clock in the Morning Friends,’ because if you needed to talk to someone at three in the morning, you knew they would be willing to wake up and be there for you.”

Seely hopes her enduring career and work as part of the Grand Ole Opry will continue to inspire generations of artists—especially female artists.

“I’ve always said, ‘Somewhere out there, there’s a little 12-year-old girl that wants to be at the Grand Ole Opry, just as much as I wanted to.’ And so the last several years of my career there, I have felt very strongly that it is my obligation, but also such a joy to encourage and to make sure the Opry stays viable. So that little girl out there gets to see her dreams come true, too.”