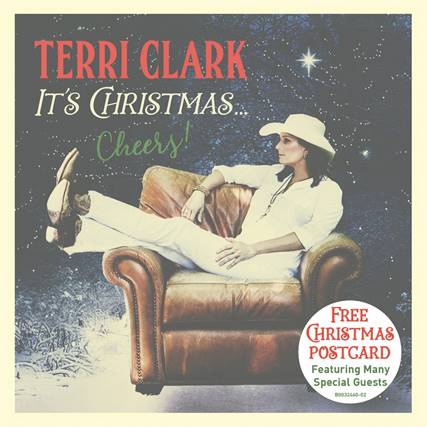 Produced by Clark herself, the album features special guests Dierks Bentley, Vince Gill, Ricky Skaggs, The Oak Ridge Boys, Pam Tillis, and Suzy Bogguss, while the Time Jumpers play on all 10 tracks. Each album will include a Christmas postcard and the LP will also feature holly green vinyl.

“I resisted making and releasing a Christmas album for many years even though I’m a big Christmas person and love the music of the season. It’s been done by the best in so many amazing ways and I wanted to wait until I felt I could make it special, be excited about it, and do it justice in my own way. Having The Time Jumpers to collaborate with and the wonderful guest artists featured – it did just that.  I am eager for everyone to hear the record that was almost 2 years in the making but took 25 years to get around to.”

Clark took to the airwaves in 2016 in a whole new way with her internationally syndicated radio show Country Gold with Terri Clark.  The show can be heard on over 170 stations across the U.S. and Canada and has garnered her CMA and ACM nominations. Throughout her career she’s sold over five million albums, and garnered hit singles “Better Things To Do,” “Poor Poor Pitiful Me,” “Girls Lie Too,” “Northern Girl,” and “I Just Wanna Be Mad.”