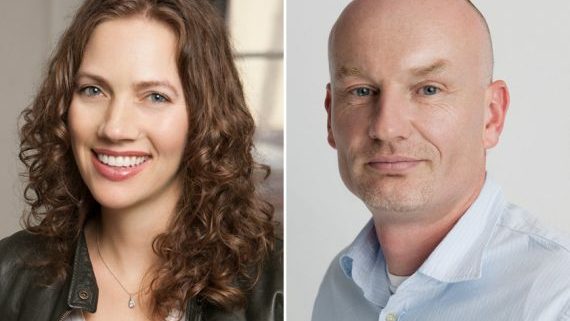 Guy Moot has officially started at Warner/Chappell in his role as Co-Chair & Chief Executive Officer, alongside Carianne Marshall, who has been Co-Chair & Chief Operating Officer since January. The company’s official announcement comes one month after Warner/Chappell’s move to a new, state-of-the art headquarters at Warner Music Group’s downtown offices. Both Marshall and Moot report to Warner Music Group CEO, Steve Cooper.

Cooper said, “It’s a time of exciting change and fresh creativity at Warner/Chappell. Last month, our L.A. team moved into a new, cutting-edge HQ; a fitting home for a dynamic music company committed to innovation and collaboration. Today, we officially announce a unique leadership duo with the ambition and energy to propel Warner/Chappell, its songwriters, and its team into the future. We’re very fortunate to have two such inspiring execs with complementary talents – Guy’s A&R vision and global operational strength, combined with Carianne’s entrepreneurial expertise and world-class creative instincts. We’re all looking forward to what’s on the horizon and what’s coming next.”

Moot said, “At a time of unprecedented possibility for songwriters, our mission is to provide the environment in which genuine talent can achieve its full, global potential. That requires real creative expertise, along with an original, fearless, and principled approach to our business. Carianne will be an amazing partner with whom to develop extraordinary hit-makers, promote an incredible catalog, and mentor a winning team. I’m really looking forward to working with everyone at Warner/Chappell and I’m grateful to Steve and Len for inviting me on this fantastic journey.”

Marshall said, “I’ve been hugely impressed by the passion and integrity that runs through the Warner/Chappell culture. We have an amazing opportunity to empower the next generation of executives, services and technologies that will benefit our entire songwriting community and help drive their long-term careers. I’m delighted to unite with Guy, as we lead our team of ambitious, pioneering music-lovers. I also want to thank Steve and Len, who I know are just as excited as we are about the future.”

Over the course of three decades in music, Moot has signed songwriters and artists including Amy Winehouse, Calvin Harris, Sam Smith, Ed Sheeran, Arcade Fire, Sia and many more. Moot began his career in 1984 with A&R roles at ATV Music and Chrysalis Records. He joined SBK Music Publishing in 1987; the company merged with EMI two years later. Moot spent the following 16 years rising through the ranks at EMI Music Publishing, and was appointed Executive Vice President of A&R for UK and Europe in 2003. Two years later, he became Managing Director of EMI Music Publishing UK and President of European Creative. In 2012, Moot took on additional responsibilities, leading the Sony/ATV and EMI Music Publishing merger across Europe. In this new role, he was tasked with developing greater effectiveness in A&R across both companies. Then, in 2017, he was appointed President of Worldwide Creative. At the same time, he continued in his role as Managing Director in the UK, and led the company to a record-breaking, year-long hold on the UK No. 1 Singles spot in 2016-17.

Prior to joining Warner/Chappell this past June, Marshall was Principal Partner, Head of Creative Services, and Head of Creative Licensing at SONGS, the acclaimed independent music publisher. She joined SONGS in 2006, helping build a roster of over 300 songwriters, including Lorde, The Weeknd, Diplo, DJ Mustard, and many others. Marshall previously spent three years as Director of Motion Picture and Television Music for Universal Music Publishing Group, prior to which she worked in the Film/Television Music division of DreamWorks Music Publishing from 2000 to 2003. Marshall began her music industry career at Los Angeles-based VOX Productions, where she did live music production, while managing and booking local bands. In 1996, she joined Elektra Entertainment Group, working in Marketing & College Radio Promotion.