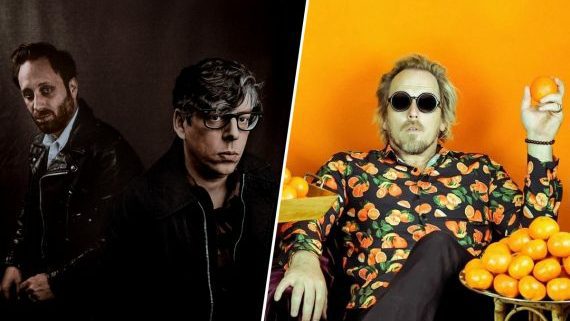 The city’s pop-rock community continues to flex its muscles as we wind up the first quarter of 2019.

The return of The Black Keys is certainly the most newsworthy event in this column. It is also the most musically delightful, and wins the Disc of the Day prize.

We have a plethora of other worthy spins here. Not the least of them belong to our bands Blank Range and Republican Hair, who share this week’s DisCovery Award.

THE BLACK KEYS/ Lo/Hi
Writers: Dan Auerbach/Patrick Carney; Producers: Dan Auerbach/Patrick Carney; Publishers: none listed; Nonesuch
– Hooray! They’re back, and steaming hotter than ever. This is a neo-ZZ Top blues banger with a relentless beat that gets my body twitchin.’ These two have been producing super music independently with others, but their original sound is still the greatest. Can’t wait for the rest of the reunion album.

JASON RINGENBERG/God Bless The Ramones
Writers: Jason Ringenberg; Producers: Mike Lescelius/ Jason Ringenberg; Publisher: Jason Ringenberg Music (BMI); JR (track)
– This track from his comeback solo CD Stand Tall is an autobiographical rampage about opening for punk rock titans The Ramones back in the day. The tempo is furiously frothing and the lyrics are terrific, right down to the description of the audience throwing vile stuff at the then-innocent Scorchers as a rite of passage and quoting, “Gabba, gabba Hey!”

CAGE THE ELEPHANT/Ready To Let Go
Writers: none listed; Producer: John Hill; Publisher: none listed; RCA
– The breakup lyric is raw and forceful. As always, the band punches with both fists. Already Grammy winners, this outfit has moved to the forefront of the Nashville rock scene with a steady stream of addictive tracks. This one advances a collection to be titled Social Cues. I predict a monster.

BLANK RANGE/Radio
Writers: none listed; Producer: none listed; Publisher: none listed; BR
– This is the lead-off track from this Nashville band’s sophomore album, and you won’t find a purer rock performance. The boys kick serious tail with twangin’ guitar work, unstoppable drumming and a dry, deadpan-snark lead vocal. I love, love, love this.

SHANNON SANDERS & THE NASHVILLE URBAN CHOIR/Fight On
Writers: Shannon Sanders; Producer: Shannon Sanders; Publisher: Songs of Shannon/ Lilyjam; Blue Rose Music
– Empowering and inspirational. Released to coincide with Black History Month, this awesome anthem transcends any specific demographic and ascends to a spirit strengthening shout for all. Sanders is a Grammy winner who has worked with India.Arie, John Legend and Johnny Lang, among others. Check out this song’s video for its cool views of Music City settings.

LENNON STELLA/Bitch (It Takes One To Know One)
Writers: Lennon Stella/Erin McCarley; Producer: none listed; Publisher: none listed; Columbia
– This Nashville popster continues her march to stardom with this layered, ear-tickling delight. In the midst of a burbling, complex, polyrhythmic, swirly production, she delivers, “It takes a bitch to know a bitch” with disarming winsomeness. With every note she releases, I become a bigger and bigger fan. Listen and believe.

LUCIE SILVAS/I Want You All To Myself
Writers: Lucie Silvas/Erin McCarley/Aaron Wright; Producer: Jon Green; Publisher: none listed; Furthest Point
– You heard this languid, soulful track on Gray’s Anatomy. It comes from Lucie’s current E.G.O. collection. She’s headed for SXSW right now, but frequently showcases in Nashville. When she does, by all means go. Incidentally, one track on the CD is produced by her hubby, John Osborne, and he plays guitar on the rocking single, “Kite.”

REPUBLICAN HAIR/Fuck a Bomb
Writers: none listed; Producers: none listed; Publisher: none listed; Duckhaus
-This punk-new-wave outfit is representing Music City tonight (March 14) at SXSW. Expect some serious head bobbing and smiling faces as they proclaim the joys of making music instead of war. Taken from the act’s current Chaotic Good album. Buy it now.