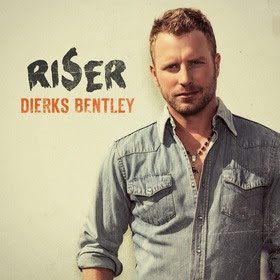 Typically, an artist announces a new tour via a press release, a video on the official website, or some similar method.
Not Dierks Bentley. The “I Hold On” singer “hacked” into CMT’s Twitter account to announce his forthcoming 2014 Riser Tour, and revealed via a series of tweets that Chris Young, Jon Pardi and Chase Rice will be joining the tour. The tour will launch May 9 in Charlotte, N.C.
“rule #1 — you should never leave your company’s twitter open at work. Guess I will have some fun with this.” Dierks said via Twitter.
He teased fans with a series of hints at who would be joining him on the tour.
“excited to see y’all out on the road! more info on cities and dates are coming soon. wonder if CMT will kick me off anytime soon,” he continued. The singer-songwriter later posted a photo with proof that he indeed got “kicked out,” before he could eat his Doritos.
A release with cities included on the tour arrived shortly after the tweets. Bentley’s upcoming studio album Riser releases Feb. 25.
First Announced Cities on the 2014 RISER TOUR First Leg:
Charlotte, N.C.
Raleigh, N.C.*
Virginia Beach, Va.
Washington, D.C.
Holmdel, N.J.
Bossier City, La.*
Robinsville, Miss.*
Detroit
Philadelphia
Scranton, Pa.
Hunter Mountain, N.Y.*
Thornville, Ohio*
Craven, SK*
Eau Claire, Wis.*
St. Louis
Morrison, Colo.
Los Angeles
Phoenix
San Diego
Mt. View, Calif.
Las Vegas
Sixes, Ore.*
Havelock, ON*
Cincinnati, Ohio
Cleveland, Ohio
Indianapolis
*Opening acts may vary, check concert listings for more details