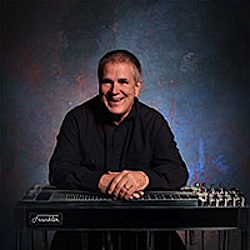 The Country Music Hall of Fame® and Museum’s quarterly program series Nashville Cats: A Celebration of Music City Musicians returns on March 23 with a salute to pedal steel guitarist Paul Franklin. The 1:30 p.m. in-depth interview, held in the museum’s Ford Theater, is included with museum admission and free to museum members. The program will be streamed live at countrymusichalloffame.org.
Hosted by Bill Lloyd, the program will include a brief performance from Franklin and an in-depth, one-on-one interview illustrated with vintage recordings, photos and film clips from the museum’s Frist Library and Archive. Seating for the program is limited, and program passes are required for admittance. Immediately following, Franklin will sign limited-edition, commemorative Hatch Show Print® posters.
Franklin is one of the most sought-after pedal steel guitarists. In addition to touring with major country artists, he has played on hundreds of recording sessions. His credits include Vince Gill’s “When I Call Your Name,” Alan Jackson’s “Don’t Rock the Jukebox,” George Strait’s “All My Ex’s Live in Texas,” Taylor Swift’s “Begin Again” and Trisha Yearwood’s “She’s in Love with the Boy.”
Born in Detroit in 1954, Franklin was performing with Barbara Mandrell and Dottie West by age 18. A first-call session musician, Franklin has also recorded with Kenny Chesney, heavy metal band Megadeth, Sting, Barbara Streisand, Randy Travis, Shania Twain, Carrie Underwood and many more.
Franklin was honored in 2012 with one of MusicRow‘s Top 10 Album All Star Musician Awards. He has earned multiple Academy of Country Music Steel Guitar Player of the Year awards, and 20 nominations for the Country Music Association Musician of the Year award. He is a member of the Medallion All-Star band, the band that provides accompaniment for the induction ceremony of new members to the Country Music Hall of Fame. He was inducted into the International Pedal Steel Guitar Hall of Fame in 2000.