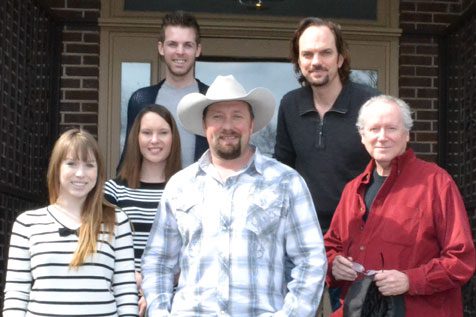 X-Factor winner Tate Stevens stopped by MusicRow headquarters last month (2/22) to celebrate what he called his “year of firsts.”
Stevens also acknowledged that he didn’t voluntarily sign up for X-Factor. “I tried to do the music thing out here in Nashville in the 90’s,” he said. “But it just wasn’t meant to be. So I got a ‘real job’ to support my family and kept up my music on the side.”
Turns out, Stevens is a part of a very supportive family. Unbeknownst to him, his wife and daughters entered him in the singing competition. Their instincts were right on.
Stevens, who won the show in December, is right on the heels of releasing his debut album. He shared his first single, “Power of a Love Song,” which was recently released to radio. He also played “I Got This,” which he co-wrote, and “That’s Where We Live.”
Stevens’ album is due out April 23. For more information, visit www.tatestevensofficial.com.
[slide]