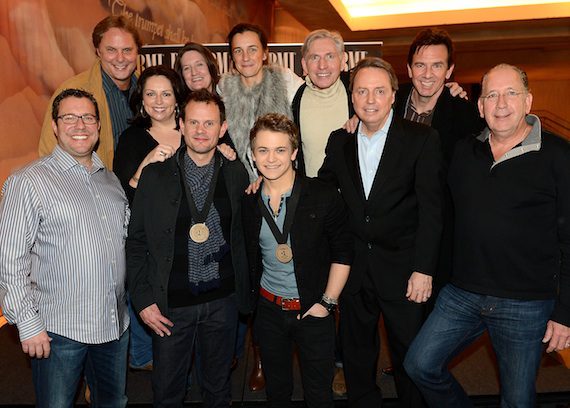 The multi-talented Hunter Hayes celebrated his first No. 1 single, “Wanted,” with a New Orleans-themed brunch at Nashville’s BMI offices on Thursday (Jan. 17). “Wanted” was co-written with veteran songwriter Troy Verges, who also co-wrote Kip Moore’s “Beer Money.”
“Wanted” is currently nominated for a Grammy for Best Country Solo Performance (Hayes is nominated for three Grammy Awards this year). During the event, Hayes was surprised with a plaque commemorating “Wanted” as a double-platinum single.
In keeping with BMI tradition for writers earning their first No. 1 song, Jody Williams presented Hayes with a special-edition acoustic guitar. Meanwhile, as attendees dined on an array of breakfast treats, including French toast and yogurt parfaits, Warner Music Nashville CEO John Esposito took a moment to praise Hayes’ parents, who were also in attendance, for instilling an admirable work ethic in their son. “If all the artists worked as hard as this kid,” said Esposito, “our life would be better.”
Hayes took the stage to thank Verges for co-writing the song and the industry for supporting him. “I’ve never known anything but music,” he said. “It blows me away that my parents let me move to Nashville and moved with me. One of the first things I learned from them was that there’s no ‘right way’ to write a song. You just write it.”