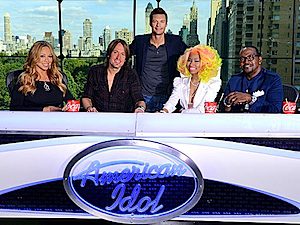 American Idol fans are anxious to watch the show’s 12th season, as a new set of judges–including Mariah Carey, Keith Urban and Nicki Minaj–join returning judge Randy Jackson. Nashville fans of American Idol will be able to catch an early look at the music competition’s first episode of its 12th season.
Fans can attend an American Idol Premiere Event at the Regal Green Hills Cinema 16 on Wednesday (Jan. 9), one week before the season premieres on FOX on Jan. 16 and Jan. 17. Nashville will be one of 11 cities nationwide that will be uplinked via a television satellite from Los Angeles to receive a satellite feed of the first episode, as well as a live Q&A session with the judges (via satellite from Los Angeles), to be hosted by Ryan Seacrest.
To reserve a place, visit idolrsvp.com. If you are given a seat, the doors will open at 5 p.m., with the episode beginning at 6 p.m. and a live Q&A with the judges beginning at 7:30 p.m. Those who do not receive a ticket can still watch the Q&A event, which will also be streamed at americanidol.com.