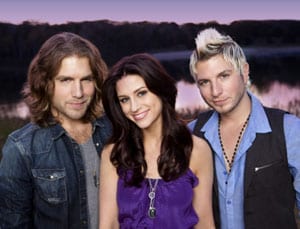 The band had a hand in writing all 11 tracks on the album and recorded with Grammy Award winning producer and Emblem Music Group label owner Matt Serletic (Willie Nelson, Matchbox 20, Aerosmith). The group’s single “(Kissed You) Good Night” is currently No. 14 on MusicRow’s CountryBreakout chart and is one of the fastest rising of the group’s career. Some of Nashville’s finest songwriters worked with the group to write songs for the album, including Josh Kear, Hillary Lindsey, James Slater, Danny Myrick, and Stephanie Bentley, among others.

“Like any new act, we were finding ourselves on the first record — in the recording process and as musicians,” says Gloriana’s Tom Gossin. “The new album really just feels like us, who and where we are now, to the point where we know exactly what we want to do and how to get there.”