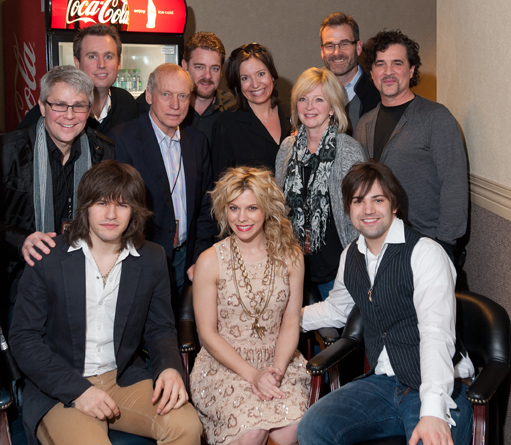 The Band Perry played to a full house at the Ryman Auditorium on Feb. 20 in downtown Nashville, TN. When tickets went on sale last fall, the show sold out in a staggering twenty minutes, a first for the Republic Nashville breakout trio. Kimberly, Reid and Neil Perry were also the first artists to perform on the recently renovated stage at the legendary venue.

“We are so excited to have performed our first headlining show in Nashville at the Ryman Auditorium! Country music’s ‘Mother Church’ was in need of some loving attention, so a brand new stage has just been added,” says Kimberly. “We had the honor of being the very first act to perform on it. The evening was even better than we imagined.”

Natalie Hemby opened for the 2012 ACM Vocal Group of the Year contenders. Hemby, who wrote Miranda Lambert’s “Baggage Claim” and “White Liar,” told the audience when The Band Perry offered her the opening slot, she was so excited that she screamed. She performed several songs including the hits she wrote for Lambert, as well as a lullaby that she recently penned for her daughter.

Afterwards, accompanied by a full band, The Band Perry shared a few new songs as well as their Gold-certified No. 1 single, “All Your Life;” their Triple-Platinum, No. 1 smash, “If I Die Young” and the Gold-certified “You Lie” from their Platinum Republic Nashville debut album. Their set included a backdrop made up of three LCD screens, which showed various animations and music video clips during the performances.

Not only did the Feb. 20 show in Music City sell out in a matter of minutes for The Band Perry, their show Feb. 18 at Billy Bob’s Texas in Ft. Worth, also sold out in advance. With more than 16,000 in attendance, the sibling trio also performed to a packed venue at the San Antonio Stock Show & Rodeo on Feb. 15.

The Band Perry heads back out on the road this week with Brad Paisley’s Virtual Reality Tour 2012. Upcoming stops include: