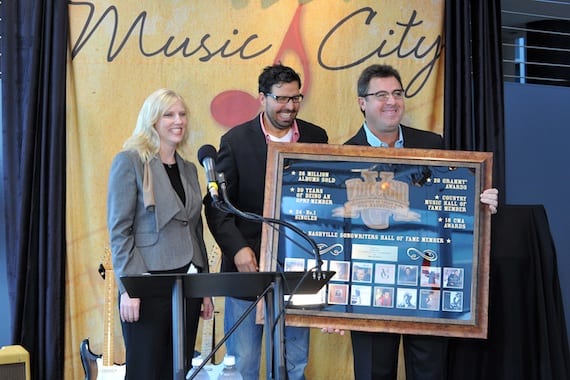 Nobody took me up on my suggestion that we rename the city Gillville, but at Thursday’s celebration at Bridgestone Arena (10/13), we paid Vince Gill plenty of other compliments.

Universal’s Beverly Keel presided at a warm, genial toast to the Country Music Hall of Fame member. Mayor Karl Dean proclaimed that this is officially Vince Gill Week in Nashville.

“Vince is a great man, a great humanitarian and a great Nashvillian,” said hizzoner. “On behalf of all the people of Nashville, thank you.” He spoke of Vince’s unparalleled musicianship and unwavering dedication to charity work.

Dean’s proclamation noted that Vince has sold 26 million records, won 18 CMA Awards (including an unequalled five Male Vocalist and four Song honors), been inducted into the Nashville Songwriters Hall of Fame (2005), entered the Country Music Hall of Fame (2007), is celebrating his 20th anniversary as a member of the Grand Ole Opry and created the Vinny charity golf tournament.

He also announced that Vince Gill will be the grand marshal of this year’s Nashville Christmas Parade (Dec. 2 at 7 p.m.).

Butch Spyridon, the president of the Nashville Convention & Visitors Bureau said to Vince, “Virtually everything that you do makes our job easier.” Vince promotes the Hall of Fame, the Opry and the Nashville Predators tirelessly. His image is on the traffic-control box at the Roundabout and the Musica statue is dancing in his honor this week. Butch presented Vince with silver cufflinks designed to resemble a phonograph turntable.

Jeff Cogen of the Predators and Bridgestone took the podium next. “You symbolize the perfect bond between our fans and our team,” he told Vince. “You set the standard in representing this community….We plan to follow you as a role model.” Noting the Christmas Parade announcement, he invited Vince to lead the parade when the Predators march the Stanley Cup into Nashville. 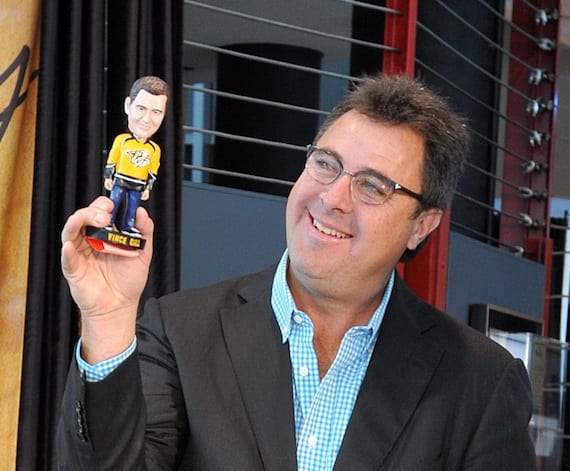 Gill and his bobble-head look alike. He is the first non-player to be honored this way by the Predators. Photo: Peyton Hoge.

Cogen’s gift was a real crowd pleaser. He unveiled a Vince Gill bobblehead dressed in a Preds uniform. Vince was clearly delighted. He collects bobbleheads.

James Pennebaker of Fender Guitars noted that this year marks the 60th anniversary of the Telecasster. Vince plays a 1953 Tele. “Vince is the Real Deal, truly a Guitar Slinger,” said Pennebaker, quoting the title of the new Vince CD, which ships next week.

His gift was a Fender Tremelux Amplifier developed by the company with Eric Clapton. Vince and Eric are the now only two people in the world with these.

Jesse Goldstein, director of operations at The Loveless Café, announced that in November the venue is also celebrating its 60th anniversary, Vince’s music will be broadcast throughout the property all month long. He presented a gift basket.

“He embodies the city’s Volunteer spirit,” said Beverly Keel of the star. “He does it with grace, humility and humor.

“Thank you for the hundreds of good deeds we know about and for the thousands that we don’t.” She and Tom Luteran unveiled a massive MCA plaque picturing Vince’s albums and listing his numerous honors.

Vince took the stage to say, “This is beyond belief. Thank you, Mr. Mayor. I think you’re a world-class guy. I don’t think you get told ‘thank you’ enough.

“Butch, thank-you for the cufflinks.” Vince added that wife Amy Grant will have to put them on for him. Despite his guitar prowess, he swears he’s clumsy with his hands.

“To the Preds, I’ve been there since Day One. I love the sport. I’ll be there tonight for the first game of the season. My daughter, Jenny, will be singing the national anthem. The bobblehead will be one of my proudest possessions,” he added. And he wasn’t kidding.

Vince was among the many who lost musical instruments in the Nashville flood. In his case, it was 40-50 guitars and 30-some amps. “So a new piece for the arsenal is welcome,” he said to Pennebaker.

Vince was the favorite celebrity of the Loveless Biscuit Lady, Carol Fay Ellison. He told us that he sang at her funeral last year.

“This room is filled with people who have touched my life,” he concluded, becoming teary eyed. 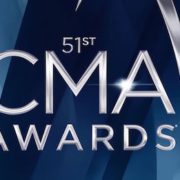