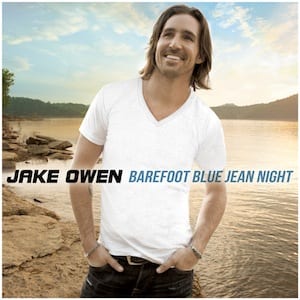 Jake Owen’s third studio album, Barefoot Blue Jean Night will be released August 29. The single “Barefoot Blue Jean Night” was recently certified a Digital Gold Single by the RIAA and is rapidly approaching Platinum with over 800,000 downloads to date. It has also entered the Top Five this week on Billboard’s Hot Country Songs chart and MusicRow’s CountryBreakout Chart.

Owen is currently wooing audiences worldwide as part of Keith Urban’s Get Closer World Tour. He will also get some time in the national spotlight September 6 when he helps announce (along with The Band Perry) the final nominees in five CMA Awards categories live on ABC from the Good Morning America studios in Times Square. The announcement will air in the 8:30 AM/ET half-hour segment of the program and Owen will also perform “Barefoot Blue Jean Night” during the broadcast.