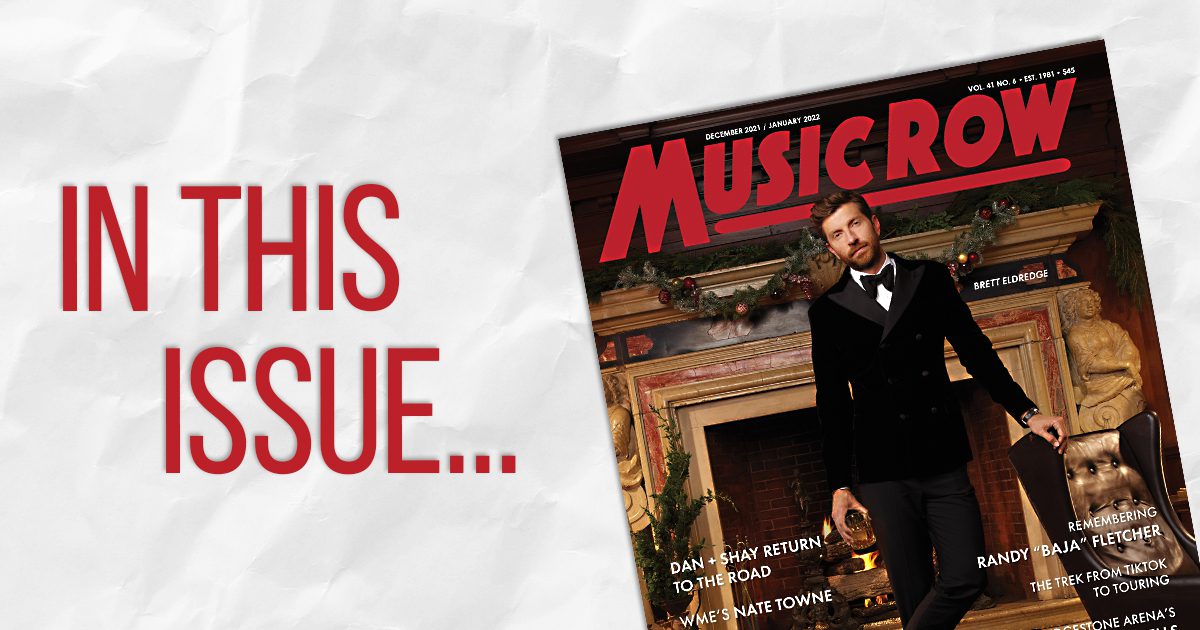 Included in this issue is a discussion surrounding the return to the road as Dan + Shay embarked on their relaunched “The (Arena) Tour.” After being forced to postpone their first headlining arena tour after only four shows, members from the award-winning duo’s team—including CAA’s Jeff Krones and Sandbox Entertainment’s Leslie Cohea—explain what the last eighteen months looked like for their camp, including rescheduling, changing production, and keeping up with COVID-19 protocols across the country. The Touring & Next Big Thing issue also tackles some of the challenges involved in the transition from success on TikTok to becoming a viable touring act for the many artists that were discovered on the platform during the pandemic. “For an artist that is used to performing within the confines of a vertical screen, it’s massive,” offers WME Music Agent, Lindsey Dodge. “It’s exciting for them to get to play on a real stage, but it’s a big change.”

Additionally, MusicRow catches up with Executive Vice President of Entertainment and Venues for Bridgestone Arena David Kells, who pulls back the curtain on some of the hardships the Nashville arena faced over the last eighteen months. The 2022 Touring & Next Big Thing Print Issue also features a Q&A with WME’s Nate Towne about his evolution from the company’s mailroom to becoming a Partner. This edition also breaks down the Nashville Number System, chronicles its beginnings from the late 1950s, and explains how it is used in modern day recording and performing.

MusicRow also remembers Randy “Baja” Fletcher, a titan of the touring industry who tragically passed away in August, with a special tribute for his journey through the live entertainment space and his vast contributions to the industry. The touring veteran had stints on the road with several entertainment giants, such as ZZ Top, Waylon Jennings, Willie Nelson, Johnny Cash, Merle Haggard, George Jones, Randy Travis, Brooks & Dunn, and Keith Urban. “His knack for engaging people of all sorts was a gift we could use more of, and he was truly an ambassador for the country music industry and humanity, in general,” says longtime tour manager for Urban, Chuck Hull, of Baja.

Also featured is the N.B.T. Industry Directory Class of 2022, which spotlights rising Nashville music representatives who are having a major impact on the industry. These industry members occupy important roles at their respective companies, and are on a trajectory of excellence to successfully lead the Nashville music industry into the future. Click here to view the 70 N.B.T. members of 2022.

Additionally, the 2022 Touring Directory is included in this issue, featuring contact information for touring transportation, production and insurance companies.

Single copies of MusicRow’s 2022 Touring & Next Big Thing Issue are available for purchase at musicrow.com for $45, and are included with yearly MusicRow memberships.