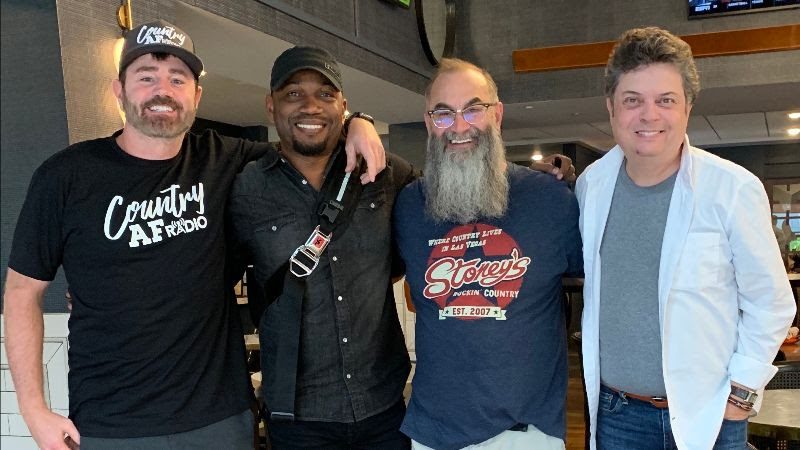 Jim Della Croce has teamed with Stoney’s founder/president Chris Lowden and Stoney’s Jeff “Toad” Higginbotham to form Stoney’s-Pathfinder Management. The partners have offices at RCA Studio in Nashville, as well as in Las Vegas and just outside New York City.

Della Croce will continue to manage artist Tony Jackson, alongside Lowden and Higginbotham. Jackson has more than 67 million views and keeps a steady string of Grand Ole Opry appearances, in addition to a full touring schedule.

“I couldn’t be more excited about joining Tony’s team. What an incredible voice and performer, let alone human being,” says Lowden. “I’m honored to walk in the path that Donna [Donna Dean Stevens] and Jim paved and looking forward to a very bright future.”

“Donna Dean Steven’s and I have had the pleasure of collaborating for several years on multiple projects, and our Tony Jackson co-management/label and production partnership was a highlight. It was important for me to team with someone who shared our passion for Tony and represent him in that same spirit, and Chris and Toad were the perfect fit. I worked with them for several years and value their talents and hope to share the same level of positivity that I did with Donna as Tony’s star continues to rise,” says Della Croce.

“I am so looking forward to continue sharing Tony Jackson’s story with everyone via social and Country AF Radio. Being a part of the Tony Jackson train is an honor and I personally can’t wait until Tony Jackson becomes a household name,” proclaims Toad. The Agency for Performing Arts (APA) including President and CEO, Jim Gosnell as well as Co-Head of Worldwide Music at APA, Steve Lassiter celebrated the 25th anniversary of their Nashville office on Monday (Oct. 28). The celebration took place at their office in downtown Nashville, which hosted special guests such as David Nail, Jim Messina and the Scooter Brown Band. IEBA concluded its 49th annual conference on Oct. 29 with its Honors & Awards Ceremony in Nashville. This year’s winners include:

Club Buyer of the Year – Josh Moore – The Bowery Presents Jason Aldean has announced he will play a free concert at his Jason Aldean’s Kitchen + Rooftop Bar in downtown Nashville tonight (Oct. 30). Filming will also be in session during the concert.

Aldean will soon release his upcoming studio album 9 on Nov. 22 via BBR Music Group. Aldean reunites with longtime producer Michael Knox for the project, which features his latest single “We Back.” BMG Nashville Executive VP Kos Weaver has exited the company as part of a reorganization, MusicRow has confirmed. Also exiting are three BMG support staffers; the move does not affect staff at BBR Music Group, or BMG’s royalties/copyright teams located in Nashville.

“Kos’s success over the past years speaks for itself and we wish him well,” BMG says in a statement. “Nashville is a major growth market for BMG. The restructuring is consistent with our ongoing US strategy—maintaining our core strength and position in publishing while increasing our investment in writer-performers (case in point: Lewis Capaldi going to Number One in the US). We are now extending that approach to Nashville and it requires a different skillset and experience, hence the reorganization.” The Academy of Country Music welcomed Buena Vista recording artists Temecula Road to the office while they were in Los Angeles recently. While at the Academy, the trio performed their current single, “Maybe Not” along with other songs from their upcoming project. Gene Watson was honored with the commission of Kentucky Colonel during his show at the Kentucky Opry. While on stage in Benton, Kentucky, Bill Cates, a longtime fan of Watson’s, presented the honor on behalf of Mayor Mathew Bevins. The Kentucky Colonels were established in 1813 and notable honorees include Winston Churchill, John Glenn, Clark Gable, Bing Crosby, J. Edgar Hoover, Elvis Presley, Roy Rogers and now Gene Watson.

The commission of Kentucky Colonel is the highest title of honor bestowed by the Governor of Kentucky. It is recognition of an individual’s noteworthy accomplishments and outstanding service to the community, state and nation.

Craig Campbell To Be Featured On Country Outdoors Podcast Craig Campbell makes an appearance on this week’s episode of the Country Outdoors Podcast, from the Outdoor Sportsman Group, which offers fans a new way to connect with their favorite country music artists by discussing outdoor lifestyle topics.

Campbell discusses the influence that the outdoors has had on his music, how he got discovered in Nashville, his charity cornhole tournament, social media and how he balances everything. Taylor Swift may be making history once again at the upcoming 2019 American Music Awards next month. The 29-year-old will receive the coveted Artist of the Decade Award and perform at the 47th annual awards ceremony. Swift is nominated for five awards at this year’s ceremonies, including Artist of the Year, Favorite Music Video, Favorite Female Artist — Pop/Rock, Favorite Album — Pop/Rock (for her latest project Lover), and Favorite Artist — Adult Contemporary.

The AMAs are going to be a big night for Swift, who has won more AMAs than any other artist this decade, and last year made history for being the female artist with the most AMAs wins, surpassing Whitney Houston. The 23-time AMAs winner has the chance this year to break Michael Jackson‘s record for most wins as well, who had 24.

“Taylor’s impact on music this decade is undeniable and her performances on the American Music Awards have been truly spectacular,” said Mark Bracco, executive vice president of programming and development at Dick Clark Productions. “We’re thrilled to honor her as our Artist of the Decade and can’t wait for her to blow everyone away with an epic, career-spanning performance unlike any other!”

The American Music Awards air live on ABC from the Microsoft Theatre in Los Angeles on Nov. 24. “We’re excited to be able to provide industry veterans such as Mark, Cole and April with the additional resources that they need to bring both established artists such as Shenandoah, as well as up-and-comers like Austin Merrill, to a global audience,” says ADA President of A&R and Label Services Kenny Weagly. “This partnership is another example of ADA’s growing footprint in Nashville, where we are excited to support the flourishing independent music culture.”

“Shenandoah begins another chapter with great confidence in the individuals of Foundry Records,” says Marty Raybon of Shenandoah. “Cole Johnstone is one of the most motivated people I’ve ever met; he knows nothing less than the extra mile. Mark Bright’s credits speak volumes as a hit maker and we look forward to doing just that with him, April and a wonderful staff at Foundry.”

Shenandoah has garnered more than a dozen No. 1 hits, including “Two Dozen Roses,” “The Church on Cumberland Road,” “Next To You, Next to Me,” and their Grammy-winning duet with Alison Krauss, “Somewhere in the Vicinity of the Heart.”

Spotify wants to create a “playground of sound” for younger listeners with the introduction of its new standalone app Spotify Kids, intended for children as young as 3.

The content will be licensed from brands including Nickelodeon, Disney, Discovery Kids, and Universal Pictures, as well as Sweden’s Public Service and the family-focused audio streaming service BookBeat.

The Spotify Kids app is currently in beta mode in Ireland, though the company plans to roll out the app in all markets that have Premium Family in the coming months. The initial launch includes 80 playlists and more than 6,000 songs. Content on the new app is ad-free and handpicked by a team of editors. Each child will be able to select a custom avatar and color theme.

The Spotify Kids app will include separate segments of content for children of different ages. “Audio for Younger Kids” will feature lullabies and singalong content, while “Audio for Old Kids” will include popular songs (excluding explicit content).

The Spotify Kids app will be available for Spotify Premium Family subscribers at no additional charge for iOS or Android devices. Google and SiriusXM announced today that SiriusXM will be available on Google Nest smart speakers and displays through the Google Assistant, bringing access to SiriusXM’s lineup of audio entertainment to millions of homes across the country. Rolling out over the next week, users will see SiriusXM’s lineup of programming in the Google Home app, available on iOS and Android devices.

Later this year, subscribers with a Nest Hub or Nest Hub Max will be able to watch SiriusXM video, giving them access to a selection of video clips curated specifically for Google Assistant that will allow them to see exclusive in-studio performances, interviews and other entertaining moments at SiriusXM.

“The Google Assistant and Google Nest’s portfolio of connected home devices, including the Google Home and Nest Hub, utilize intuitive voice recognition technology that make them a great way for subscribers to experience SiriusXM’s compelling and exclusive content in the home,” said Jennifer Witz, SiriusXM’s President, Sales, Marketing and Operations. “We are excited to add Google Nest and Google Home devices to the roster of in-home listening options for our subscribers with streaming access, which now number more than 30 million. Teaming up with Google to deliver great deals on our unparalleled bundle of programming and Google’s outstanding products is a win-win for consumers this holiday season.”